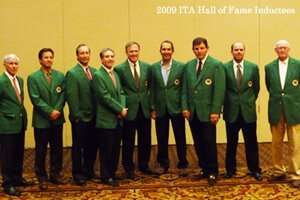 COLLEGE STATION, TX – The Intercollegiate Tennis Association (ITA) inducted nine new members into the ITA Men’s Collegiate Tennis Hall of Fame on the night of Wednesday, May 20th during the NCAA Division I Men’s Tennis Championships at Texas A&M University. The Class of 2009 consists of seven players, one coach and one contributor.

Players are eligible for election to the ITA Hall of Fame 15 years after their last collegiate match and coaches are eligible immediately following retirement. The main criteria for election are college accomplishments as well as honors earned after college. College coaching legend Dan Magill serves as curator for the ITA Hall of Fame, which is housed at the University of Georgia.

The University of Southern California’s three inductees gives it 18 members in the ITA Men’s Hall of Fame. This was the fifth time that multiple Trojans have been inducted in the same Hall of Fame class and the third time that at least three players from USC were inducted together.

CONTRIBUTOR: Brian Garman (Cornell and Western Michigan) – Assistant Referee for NCAA Championships (1980-Present)…Assistant Director for US Boys’ 18 and 16 Championships at Kalamazoo…Inventor of the Garman computer system used for scheduling matches…Currently an Associate Professor for Mathematics at the University of Tampa.

The ITA Men’s Tennis Hall of Fame, which includes over 1,800 rare photos, was inaugurated in 1983 and has inducted more than 200 players, coaches and contributors. Members include the late Arthur Ashe (UCLA), Jimmy Connors (UCLA), John McEnroe (Stanford) and Stan Smith (Southern California). The ITA Women’s Collegiate Tennis Hall of Fame is located at McCormack-Nagelsen Tennis Center at the College of William & Mary in Williamsburg, Va.