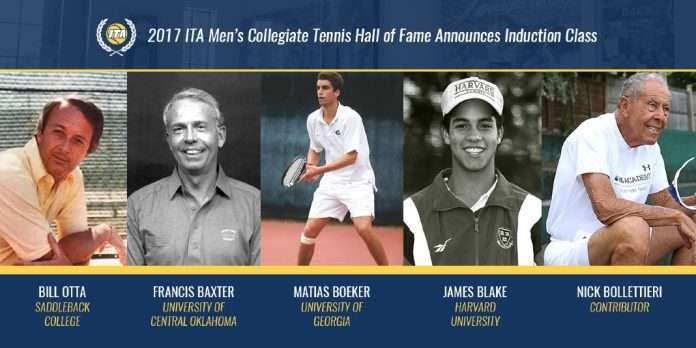 The 2017 ITA Men’s Collegiate Tennis Hall of Fame Enshrinement Banquet will be held on Thursday, May 25, at the Georgia Center during the NCAA Division I Men’s and Women’s Championships, May 18-29, at the University of Georgia in Athens, Georgia.

“This is a very accomplished and interesting class of 2017 and we’re very excited about adding all five members to the Hall of Fame,” John Frierson, curator of the ITA Collegiate Tennis Men’s Hall of Fame. “We’re inducting two exceptional players, two very successful coaches from the Division II, NAIA and Junior College divisions, and another individual in Nick Bollettieri that would surely be on the Mount Rushmore of greatest and most important tennis coaches of all time.

“We always love it when the NCAA Championships return to Athens and we get to induct a class here at the home of the Hall of Fame, where so many great players have played in so many big matches,” added Frierson. “A lot of us remember well watching James Blake and Matias Boeker perform here at the Dan Magill Tennis Complex and it’s going to be a thrill to put the perfect coda on their careers by adding them to the Hall of Fame.”

Francis Baxter, Coach/University of Central Oklahoma (men: 1970-2006, women: 1980-2006). Francis Baxter enjoyed tremendous success during his long tenure as tennis coach at UCO, directing the men’s program for 36 years (1970-06) and women for 26 years (1980-2006). Prior to coaching college tennis, he spent 14 years coaching high school tennis and won three state titles. At Central Oklahoma, he led the men’s and women’s teams to six NAIA District 9 championships in the 1980s while taking the men to three NAIA national tournaments and the women to one. Baxter was named District 9 Coach of the Year eight times in the 1980s. Baxter also guided his teams to eight combined NCAA Division II national tournament appearances, six for the men and two for the women. Baxter was named Lone Star Conference Coach of the Year for the women in 1998 and the men in 2004, while also claiming Division II Coach of the Year accolades for the men in 1996. He coached 14 players who earned NAIA or Division II All-America honors a combined 25 times, including the school’s first-ever Division II national champion (Charl Bornman). Baxter was also the driving force behind UCO hosting the NCAA Division II national tournament in 1991, ‘92, ‘93 and ‘96 in addition to the ITA/Rolex National Small College Championships in 1993 and ‘94. As a player, Francis served as captain of a United States international team from 1993-01, leading the 60-and-over men to the Von Cramm Cup title seven straight years from 1993-99 and taking the 50-and-over men to the Fred Perry Cup crown in 2000 and 2001. He was inducted into the Missouri Valley Tennis Association Hall of Fame in in 1991 and the Central Oklahoma Hall of Fame in 2009.

Bill Otta, Coach/Saddleback College (1975-2000). One of most accomplished coaches in the history of community college tennis, Otta became the first tennis coach in Saddleback College’s history when he founded the program in 1975. He finished his career with an overall record of 383-74 (.836), including a conference record of 254-20 (.927) with the men’s program. He spent a total of 22 years as men’s coach and three years as women’s coach. His men’s teams accounted for 17 conference championships, 10 regional championships, and eight state championships. After resurrecting the women’s program, he finished with a 43-12 (.782) record in three seasons, claiming two more conference titles. Otta earned both California Coaches Association Coach of the Year and Wilson/ITA National Community College Coach of the Year honors during his career. He served as the President of the California Community College Tennis Coaches Association (CCCTCA) for four years and was inducted into the CCCTCA Hall of Fame in 2002.

James Blake, Harvard (1998-99). Blake played two seasons at Harvard before beginning what turned out to be an outstanding pro career. In 1999 Blake was the top player in collegiate tennis, earning ITA Player of the Year honors, as well as being an All-American in singles and doubles. He also reached the finals of the NCAA singles tournament that year, falling in three sets to 2015 Hall of Fame inductee Jeff Morrison of Florida. In addition, Blake won the ITA All-America Championships in singles and doubles and the ITA Rolex National Indoor title. During a 14-year pro career on the ATP Tour — he retired in 2013 — Blake rose as high as No. 4 in the world (in 2006, when he ended the year as the top-ranked American) and he captured 10 career singles titles. He also earned a singles win in the 2007 Davis Cup finals, helping the United States claim the cup for the first time in 12 years. In all, Blake played spent eight years on the Davis Cup squad. The Yonkers, N.Y., native, long one of the most popular players on tour, had his best Grand Slam results close to home. Of his three quarterfinal appearances in majors, two came at the U.S. Open.

Matias Boeker, Georgia (2000-02). One of the few Triple Crown winners in history, Boeker in 2001 led the Bulldogs to the NCAA team title and then captured the singles and doubles (with Travis Parrott) championships. The only players to do it before him were Stanford’s Alex O’Brien and Bob Bryan. In 2002 he became the first player since another Bulldog, Mikael Pernfors in 1984-85, to win back-to-back NCAA singles titles. An All-American after all three seasons at Georgia, Boeker won his final 23 matches for the Bulldogs and posted a career singles record of 108-25. In 2015 Boeker was inducted into Georgia’s illustrious Circle of Honor, joining ITA Hall of Famers Dan Magill, Allen Miller and Al Parker.

Nick Bollettieri, Spring Hill College. Bollettieri’s contributions to the sport are countless, though we might begin with his legendary tennis academy in Florida (founded in 1978) that has trained over 1,500 collegiate players and counting. The IMG Academy, formerly Nick Bollettieri Tennis Academy, was the first full-time tennis boarding school to combine intense training on the court with a custom-designed academic curriculum. Many of his former players went on to become ITA National Champions, including players like David Wheaton (Stanford) and Cecil Mammit (USC). His coaching protégées include over 25 former players who have gone on to become college coaches at various levels, including Carlos Drada (Kentucky women, 2006-present), Cedric Kauffman (Kentucky men, 2012-present) and Chris Garner (Amherst). He hosted the initial planning session of key ITA coaches in 1979 at The Colony in Longwood Key, Florida that led to the forming of the ITA Board of Directors. Following Rolex sponsorship of the ITA All-Star Awards Outing & Luncheon in 2002-2003 at the West Side Tennis Club, Bollettieri personally raised the necessary money that allowed the continuation of the luncheon. Bollettieri has also spoken at the ITA Coaches Convention almost every year since its inception.

The ITA Men’s Collegiate Tennis Hall of Fame is housed at the University of Georgia’s Henry Field stadium in Athens. The late, legendary Georgia men’s coach and Hall of Fame member Dan Magill served as curator and chairman of the Hall of Fame. The current curator is John Frierson. The ITA Men’s Hall of Fame, which includes over 1,800 rare photos, inducted its first class in 1983 and has inducted more than 260 players, coaches and contributors since then. Players are eligible for election to the Hall of Fame 10 years after the conclusion of their participation on the team, and once they are no longer participating on the pro tour. Coaches are eligible immediately following retirement. The main criteria for election are college accomplishments as well as honors earned after college.