Wilson ITA Men’s Coach of the Year – Chase Hodges, Georgia Gwinnett College
Hodges has led the GGC men’s tennis team to 78 straight wins. It is currently the longest winning streak in all of college athletics (not just tennis but all of college athletics). The GGC men’s tennis team has never lost an NAIA match in school history and is looking to make history with a five-peat national championship in Mobile, Alabama. Coach Hodges is a huge advocate for the sport of college tennis and the entire NAIA as the Grizzlies have played a major role in taking NAIA tennis to the highest level of college tennis. In addition, Coach Hodges leads the Special Olympics initiative in Gwinnett County for tennis as the team hosts the annual Special Olympics day which has close to 200 kids with special needs to learn the game of tennis.

tasc Performance ITA Assistant Coach of the Year – Karan Salwan, William Carey University
Played for Xavier University (two-time national runner-up). Helped coach the team to a Top 5 national ranking, with the team posting wins over No. 3 Xavier University and No. 5 Mobile University. Assisted the team to win the SSAC Tournament Championship as a No. 3 seed. Helped to build good character on and off the court. Involved in community service projects.

ITA Arthur Ashe Jr. Leadership & Sportsmanship Award – Joel Montgomery, Indiana Wesleyan University
Montgomery is 16-5 in singles at No. 2 and No. 3 singles, and 28-5 in doubles at primarily No. 3 doubles. He and his doubles partner made it to the ITA NAIA Midwest Regional semifinals in doubles. The last two summers, he has worked at Joni and Friends International Disability Center in Los Angeles, California. His compassion for people has been developed through loving his mom through brain cancer that has left her physically and mentally disabled. He has done disability etiquette training for students at IWU, churches in Marion and for his home church in Columbus, Ohio. He has also helped coach and teach tennis with an organization that ministers to children and adults who have Down Syndrome. He has even started a disability ministry at his home church to help families with disability to have a place in which they can worship and know that their loved ones are being cared for during the service. He is the Ambassador Chair for the Office of Intercultural Learning and Engagement. In essence Montgomery is in charge of helping all of the International students feel like they have a place to belong, training to become integrated into our culture, and a pathway to academic success. Montgomery was responsible for putting together the entire “Passport to Culture” night this year on campus. This is an event attended by over 1,000 students and faculty that exposes students to different cultures. In addition to these responsibilities, Montgomery is a three-year captain of his tennis team.

ITA Rookie of the Year – Camilo Erazo, Lindsey Wilson College
With a record of 12-1 singles and 14-0 doubles, Erazo holds a No. 6 national ranking in doubles and has defeated the No. 7, No. 21, and No. 24-ranked players in the nation in singles

ITA Player to Watch – Vicente Lagos, Keiser University
Lagos has a overall singles record of 20-7 while going 14-4 in dual play. He is 26-8 in doubles overall and 16-4 in dual matches. He is currently ranked No. 3 in the nation in singles and No. 19 in the nation in doubles. He teamed with Daniel Ceron in the fall and finished runner-up at the 2017 ITA Oracle Cup in doubles.

ITA Most Improved Senior – Chrys Castro, Campbellsville University
Castro is 14-5 in singles and 13-5 in doubles. He won the ITA East Region Doubles Fall Championship and reached No. 4 in the regional rankings. He was named Mid South First Team All-Conference. Serving as team captain, Castro is the energy for his team, and the glue that holds them together, according to his coaches. His passion for the game is the best that they have seen in a long time and his character on the court is amazing. He is constantly congratulating his teammates on great accomplishments, and he will always be a friend to his opponent on the court after a match win or loss.

ITA Senior Player of the Year – Kevin Konfederak, Georgia Gwinnett College
Konfederak will go down as the most decorated athlete in the history of GGC athletics. Konfederak has played an integral part in the 19 national championships won by the GGC tennis programs. Konfederak is responsible for bringing an incredible 10 national titles to GGC in singles and in doubles throughout his career as well as playing a major role in the team’s quest for a 5-peat national title run. He is currently ranked No. 1 in the nation in singles in the NAIA. He won three national titles this past Fall by capturing the NAIA men’s singles national title, NAIA men’s doubles national title, and ITA Oracle Cup national doubles title. Konfederak made the biggest splash in GGC tennis history with his well-documented run in California at the Oracle ITA National Fall Championships. During this event, Kevin defeated top players from Texas A&M, Ohio State, and Florida State to stake his claim as one of the best college tennis players in all of college tennis. By winning the ITA Oracle Cup, Konfederak proved that he is the best player in all of NAIA, D2, D3, and junior college tennis. Konfederak represents the men’s tennis program in a first-class manner and is a great leader to the younger guys on the team. Konfederak has represented the Grizzlies on the national stage by being known as one of the top tennis players in all of college tennis. Konfederak also carried a 4.0 GPA and graduates in May.

Wilson ITA Coach of the Year – Daniel Finn, Keiser University
Under Finn’s direction, Keiser moved to No. 1 in the nation after defeating Georgia Gwinnett, who held the ranking for several years. It was the first loss in NAIA competition for the Grizzlies since 2015. The Seahawks won a program-record 14 consecutive matches during the regular season. Keiser carried a 20-2 record (7-0 in conference play) into the NAIA National Championships in Mobile, Alabama. The team has grown and developed tremendously since Coach Finn has been at the helm.

tasc Performance ITA Assistant Coach of the Year – Daniel Rueda, University of Northwestern Ohio
Rueda just completed his first year as an assistant coach for UNO, and the women had arguably the most successful year in program history. They defeated the highest-ranked opponent in program history (No. 4 William Woods). UNOH defeated two Top 10 teams in the same year for the first time in program history (William Woods and No. 9 Indiana Wesleyan). They won their second consecutive conference championship and third in the last four years, only losing one point against conference opponents. UNOH achieved all of this with three freshmen in the lineup. The players respect Rueda and he makes himself available to them any time of day for extra practice. In the fall he assisted with the school’s annual UNOH Tennis Day, a free day of coaching by players and coaches for middle school and high school students in our community. In January, he helped set up and run our annual UNOH/LATA Winter Classic, a doubles fundraising tournament to benefit LATA (Lima Area Tennis Association) and their weekend tennis program for inner city kids. He does all of this while pursuing his master’s degree.

ITA Arthur Ashe Jr. Sportsmanship & Leadership Award – Marissa Klein, Indiana Wesleyan University
Klein’s career singles record is 82-24. She is currently 24-2 this year in singles and 23-8 in doubles. She has been selected to the All-Crossroads Team two times. Her team has made it to the NAIA Elite 8 the last two years and were the NCCAA National Champions two years ago, where she won the clinching point and was runner-up last year. Klein is an Intercultural Ambassador for the Office of Intercultural and Global Engagement and assists in helping Indiana Wesleyan International students feel welcomed, integrated into the IWU community, and achieve academic success. Next year, she will take on the main leadership role as the Chair of the Intercultural Ambassador Team. She is currently a mentor and “Big Sister” for a girl at the Boy’s and Girl’s Club of Marion. She routinely volunteers at the Grant County Rescue Mission and was the fundraising group leader for students at IWU. She teaches tennis to children and youth of inner city Evansville. She coaches a Jr. High basketball team during the summer. She is also a coach for a Middle School Tennis program. In addition to all of the volunteer roles, she is a group leader and speaker for her home church VBS program.

ITA Rookie of the Year – Mariia Borodii, Xavier University of Louisiana
Borodii is 15-0 singles (all at No. 1) and lost only one set in those singles decisions (20-0 in road sets in those singles victories). She also has a 15-4 record in doubles (12-4 at No. 1) and won 10 of last 11 decisions. She’s ranked No. 2 nationally in singles and No. 3 in doubles. Borodii is theonly Xavier woman ever to hold simultaneous Top 3 singles and doubles national rankings. She was 7-0 against nationally-ranked players in singles, and 5-2 in doubles. Borodii was a five-time conference Player of the Week and recipient of the Greater New Orleans Amateur Athlete of the Month award, becoming the first Xavier tennis player to win this award since its inception in 1957.

ITA Player to Watch – Kaede Amano, Campbellsville University
Amano is 17-1 in singles this year and is ranked No. 12 in NAIA singles. She posted wins over the No. 14, No. 34 and No. 36-ranked players. She is ranked No. 15 in doubles and was the East Region Doubles finalist in Fall. She was named the MSC Player of Year and First Team All-Conference.

ITA Most Improved Senior – Autria Compton, Arizona Christian University
Compton currently holds a No. 14 West Regional ranking in singles, while in doubles, she and partner Maria Garduno are ranked No. 16 in the nation.

ITA Senior Player of the Year – Camille Gbaguidi, Savannah College of Art & Design
Gbaguidi is 12-0 this year and 64-2 for her career in singles play. She is a two-time ITA Oracle Cup champion in singles and qualified for the Oracle ITA National Fall Championships in the process. A two-time conference Player of the Year twice, she has been the No. 1-ranked player in the nation the past two years. Gbaguidi is the team captain, leads team fitness training and community service efforts. She is the SCAD female Athlete of the Year twice and contending for her third title. Won first place in art competition as a side project and had her future concept accepted into the world’s largest architectural design competition. Gbaguidi has also maintained above a 3.8 GPA all four years. 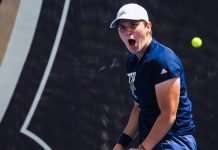 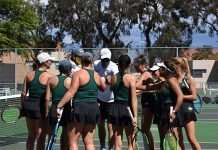