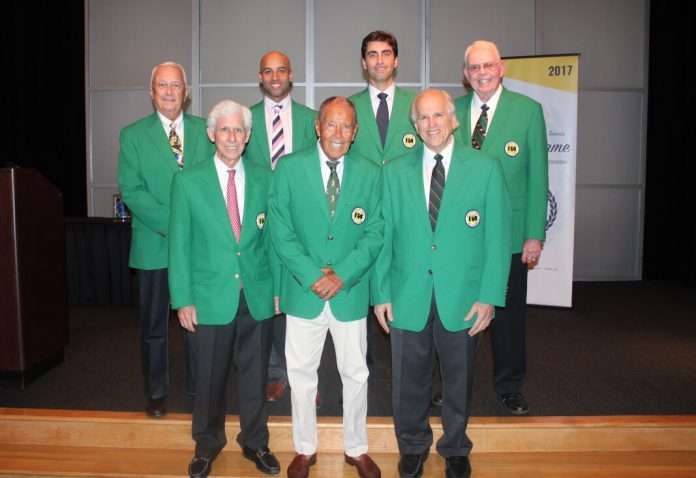 Athens, Ga.— During the past week, dozens of the country’s best collegiate tennis players descended upon the city of Athens to compete at the 2017 NCAA Tennis Championships.  And while players from around the globe highlighted this week’s play on the courts, the ITA Men’s Collegiate Tennis Hall of Fame also honored individuals whose impact on the game also has international reach.

Boeker enjoyed an illustrious career while at UGA from 2000-2002, becoming one of only three players in NCAA history to win the Triple Crown. He was also an All-American in each of the three years he played at UGA. The former SEC Athlete of the Year joins fellow player James Blake as well as coaches Nick Bollettiere, Francis Baxter and Bill Otta in the 2017 Hall of Fame Class. Hailing from Argentina, Boeker said the tennis tradition of UGA and the bond he was able to establish with Coach Manuel Diaz and other members of the team are what drew him to choose Athens as his collegiate home.

Coach Diaz had the honor of introducing Boeker at last night’s event.

“I was taken back by the incredible ability to focus and the quiet tenacity that Matias had,” Diaz said, “In a few words, Matias is a winner all around.”

During the induction ceremony, Boeker described his proudest mom as, “without a doubt, the triple crown that I won, which is the team, singles, and doubles. After that I was given the SEC Male Athlete of the Year as a result.”

Boeker spent most of his career playing number one singles and doubles at UGA, finishing with a career record of 108-25 and 88-31 respectively during his three seasons. After a brief stint as a professional which included a U.S. Open appearance, Boeker decided to return to school to further his education. He earned an MBA from the Wharton School of Business and a Masters degree in International Studies at Lauder Institute, both of which are at the University of Pennsylvania.

Boeker attributes much of his professional success to the lessons he learned at UGA under Coach Diaz.

“The number one quote I remember from being on the Georgia team and from Manny is ‘you got to love the battle,’” Boeker says. “That relates to the real world because everything, trying to get an MBA degree or interview for jobs is always a battle. Everything is a battle in life.”

Boeker becomes the seventh Bulldog to be enshrined in the Hall of Fame, joining legends such as Dan Magill, Michael Pernfors, and Al Parker.

Blake, who played two years at Harvard before eventually becoming the fourth-ranked professional player in the world, spoke about how much he enjoyed the team aspect of college tennis.

“My favorite college tennis memory has nothing to do with a win or some amazing point, but at Harvard, you walk over the Charles River getting to the athletic complex and we would have team breakfast together every morning before matches. It was so fun and what really made my college experience amazing was my teammates.”

“I’m very thankful for having college tennis to build up my confidence, strength, and my belief that I was making the right decision to turn pro. Having those two years under my belt before I went on the pro tour really made a difference in getting me the attitude that I had to keep persevering and going through a lot of tough years.”

Bollettieri, who is quite possibly the most accomplished coach the game has ever seen, spoke about what the occasion meant to him.

“It means a lot because in collegiate tennis the players play for the team and the school,” Bollettieri said. “Not for money, not for cars.  I’m in a lot of Hall of Fames but getting into this is a tremendous honor.”

When the casual tennis fan hears the name Bollettieri, the usual images pop up of Jim Courier, Monica Seles, Andre Agassi, among the other professional champions who came under the tutelage of the tennis legend. But as Bollettieri himself said Thursday night, the game has changed. A majority of the players coming through his academy today go on to play college tennis, a stark difference from the early 1980’s when he would regularly turn kids pro as young as 14 years old.

“In the very beginning I was looking for champions, and fortunately we had ten of them,” Bollettieri said. “I used to turn them pro when they were in diapers, but today the majority of students should go to college, because to play against the pros that are physically developed, would be very difficult.”

Baxter enjoyed tremendous success during his long tenure as the tennis coach at UCO, directing the men’s program for 36 years (1970-06) and women for 26 years (1980-2006). Prior to coaching college tennis, he spent 14 years coaching high school tennis and won three state titles.

At Central Oklahoma, he led the men’s and women’s teams to six NAIA District 9 championships in the 1980s while taking the men to three NAIA national tournaments and the women to one. Baxter was named District 9 Coach of the Year eight times in the 1980s. Baxter also guided his teams to eight combined NCAA Division II national tournament appearances, six for the men and two for the women. Baxter was named Lone Star Conference Coach of the Year for the women in 1998 and the men in 2004, while also claiming Division II Coach of the Year accolades for the men in 1996. He coached 14 players who earned NAIA or Division II All-America honors a combined 25 times, including the school’s first-ever Division II national champion (Charl Bornman).

One of the most accomplished coaches in the history of community college tennis, Otta became the first tennis coach in Saddleback College’s history when he founded the program in 1975. He finished his career with an overall record of 383-74 (.836), including a conference record of 254-20 (.927) with the men’s program. He spent a total of 22 years as the men’s coach and three years as the women’s coach. His men’s teams accounted for 17 conference championships, 10 regional championships, and eight state championships.

After resurrecting the women’s program, he finished with a 43-12 (.782) record in three seasons, claiming two more conference titles. Otta earned both California Coaches Association Coach of the Year and Wilson/ITA National Community College Coach of the Year honors during his career. He served as the President of the California Community College Tennis Coaches Association (CCCTCA) for four years and was inducted into the CCCTCA Hall of Fame in 2002.