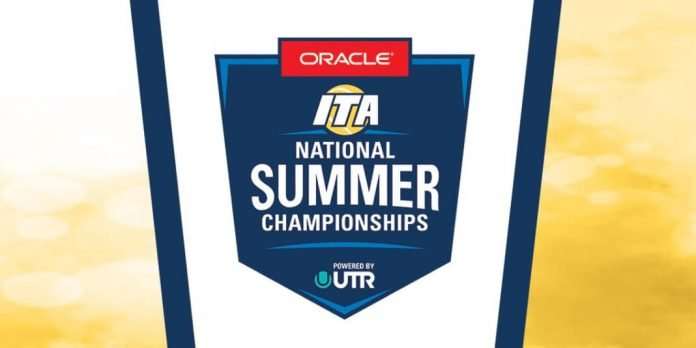 FORT WORTH, Texas – With prize money totaling up to $20,000, in addition to main draw wild cards into the 2018 ITA All-American Championships on the line, competitors had plenty to play for on the final day of the 2018 Oracle ITA National Summer Championships Powered by MyUTR .

Hosted by TCU at the Bayard Friedman Tennis Center in Fort Worth, Texas, the National Summer Championships concluded its five-day run on Tuesday, August 14, 2018, with men’s and women’s singles and doubles championship matches.

Castalleno’s attempted double-dip fell just short, as she and Badgers’ teammate Lexie Keberle fell in the women’s doubles final to Nina Khemlnitckaia and Janet Koch of Kansas. The Jayhawks’ duo earned $1,250 in prize money and a main draw wild card into the 2018 Riviera ITA Women’s All-American Championships, while the Wisconsin team claimed $625 in prize money and an All-American qualifying draw wild card.

The Oracle ITA National Summer Championships Powered by MyUTR is the culmination of the Oracle ITA Summer Circuit Powered by MyUTR, which ran for six consecutive weeks from late-June through the end of July. Nearly 30,000 men and women have competed in ITA Summer Circuit events since it began in 1993. The summer circuit provides college (and junior and alumni) players the opportunity to compete in organized events virtually year-round. Although the primary focus of the circuit is to provide incoming freshmen and collegiate players the chance to compete in the summer months, for NCAA compliance purposes, the events within the ITA Summer Circuit are categorized as “open”; therefore anyone was eligible to compete in these events as long as he/she is a current ITA member.