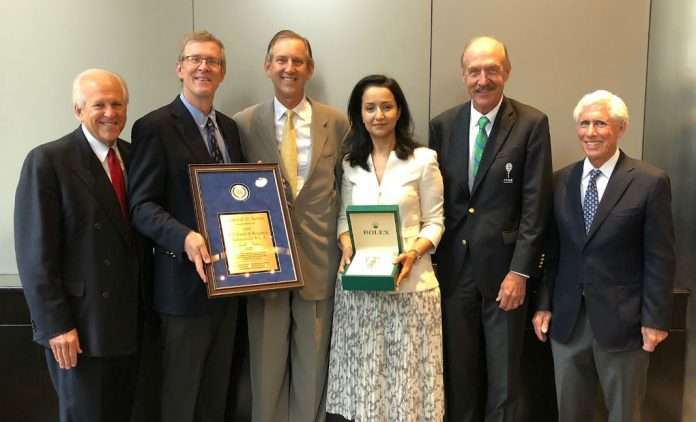 TEMPE, Ariz. – Frederick “Rick” Barton, alumnus of Harvard University Class of 1971, and the Boston University School of Management Class of 1982, received a prestigious honor from the Intercollegiate Tennis Association when he was presented with the 2018 ITA David A Benjamin Achievement Award on Saturday, September 8, 2018, at the International Tennis Hall of Fame’s Board of Governors Meeting at the Grand Hyatt Hotel in New York. The ceremony was hosted by the ITHF and presented by Rolex Watch, U.S.A.

Stan Smith, President of the ITHF, presented the award along with David A Benjamin, ITA Chairman Emeritus, Timothy Russell, ITA Chief Executive Officer and Mounia Mechbal, Vice President of Communications, Rolex Watch U.S.A., who presented a distinctive, personally engraved, Rolex timepiece to Barton. In addition to this special gift, Barton and a guest were invited to watch a session of the 2018 US Open from the President’s Suite, courtesy of USTA, and were also recognized during the ITHF’s Legends Ball.

“The Intercollegiate Tennis Association is thrilled to recognize Rick Barton as the 2018 recipient of the 2018 ITA David A Benjamin Achievement Award,” said Russell. “The ITA’s mission is to serve college tennis, advance our sport, and return the leaders of tomorrow. Rick is a shining example of a student-athlete taking the tools and experience gained on the tennis courts and in the classrooms and applying them throughout a distinguished professional career.”

Now in its 25th year, the ITA David A Benjamin Achievement Award pays tribute each year to past participants in the world of varsity tennis who have achieved excellence in their chosen careers. The spirit of the award honors both professional success and contributions to society, made either as a direct result of a career, or through humanitarian efforts. In 2015, Margie and Stan Smith endowed the ITA Achievement Award in honor of Benjamin.

“We are very proud to partner with the International Tennis Hall of Fame and Rolex Watch U.S.A. to honor Rick Barton as the 2018 ITA David A Benjamin Achievement Award laureate,” said Benjamin. “And we would also like to thank once again Margie and Stan Smith, for their generous endowment donation for this most special award.”

In more than 40 war-torn countries over the past two decades, Rick Barton has brought together policy and practice, seeking pragmatic ways to advance peace building. When Rick left the State Department in 2014, Secretary of State John Kerry thanked cited his vision and leadership, saying, “His focus, creativity and optimism have made him a welcome presence on my team as we work with our allies to resolve seemingly intractable conflicts. Assistant Secretary Barton has provided bold leadership in establishing a new bureau to prevent and respond to conflict and crises worldwide, laying the groundwork for civilian-led efforts to break cycles of violence.”

Rick Barton played varsity tennis at Harvard College, where he was the Sports Editor and Columnist for the Harvard Independent, House Athletic Director, Chair of the Quincy House Arts Festival and an elected member of the University Committee on Rights and Responsibilities. Barton graduated in 1971 with a Bachelor of Arts in Government. He then went on to Boston University for a Master’s in Business Administration with an emphasis on Public Management.

His time on the Harvard tennis team taught Barton the essential ingredients of what would become his life’s work. Preparation, a sense of shared purpose and the ability to bring joint effort to a larger mission are all fundamental to tennis and to peace building. Barton would often take his tennis racket with him around the globe as a tool of diplomacy, playing matches in Sarajevo, in the heart of the Congo or in Islamabad.

He began his career in public service working, at first on the campaign, and then as an aide to Senator William D. Hathaway. Barton spent time working for the U.S. Department of Health, Education and Welfare; hosting a public affairs TV show; and chairing the Maine Democratic Party, while starting a business and being active in the Maine community.

In 1994, Barton became the founding Director of the Office of Transition Initiatives (OTI). OTI is part of the United States Agency for International Development (USAID) Bureau for Democracy, Conflict, and Humanitarian Assistance (DCHA) and was developed to provide fast, flexible, short-term assistance to take advantage of windows of opportunity to build democracy and peace. It seeks to lay the foundations for long-term development by promoting reconciliation, jump starting economies and helping stable democracy take hold.

Following his stint as Director of OTI, Barton was then appointed the Deputy High Commissioner of the United Nations Refugee Agency (UNHCR). Second to the High Commissioner for Refugees, who is mandated by the United Nations to lead and coordinate international action for the worldwide protection of refugees and the resolution of refugee problems, UNHCR’s primary purpose is to safeguard the rights and well-being of refugees. In its efforts to achieve this objective, the Office strives to ensure that everyone can exercise the right to seek asylum and find safe refuge in another State, and to return home voluntarily. By assisting refugees to return to their own country or to settle permanently in another country, UNHCR also seeks lasting solutions to their plight.

In 2009 Barton obtained the rank of Ambassador when President Obama named him U.S. Representative to the Economic and Social Council of the United Nations (ECOSOC). Focused on global development, peacebuilding, climate change and human rights issues, he was active in the creation of UN Women, the advancement of the UN Peacebuilding Commission, and efforts to better align U.S. and UN development country programs. Secretary of State Hillary Clinton selected Barton, in 2011, as the first Assistant Secretary of State for Conflict and Stabilization Operations (CSO).

In 2013 Barton received the U.S. Department of State Distinguished Honor Award, in recognition of his groundbreaking work to create the Bureau of Conflict and Stabilizations Operations (CSO), promote peacebuilding and empower women, youth and other change agents. In 2014, Secretary of State John Kerry presented Barton the U.S. Department of State Foreign Affairs Award for Public Service “…for his visionary leadership, commitment to peaceful resolution of conflict, and promotion of innovative programming to tackle seemingly intractable problems.”

Ambassador Barton taught for five years at Princeton’s Woodrow Wilson School where he was the Frederick Schultz Professor in 2001-2002. He served on the CSIS Commission on Smart Power – a bipartisan effort to develop a vision to guide America’s global engagement; the World Economic Forum’s Global Agenda Council on Humanitarian Assistance; and the Presidential Transition’s Development Assistance Agency Review team.

Barton’s writings have appeared widely, including the New York Times, International Herald Tribune and the Financial Times. He lectures and appears on national and international radio and TV.

Barton returned to Princeton’s Woodrow Wilson School to teach in 2015 and now co-directs two fellowship programs with his wife of 43 years, Kit Lunney: the Scholars in the Nation’s Service Initiative (SINSI) and the Ullman Fellowships.

In May of 2018, Barton’s Peace Works – America’s Unifying Role in a Turbulent World was published. An accessible combination of history, policy, stories and practical recommendations, the book offers a clear way for America to improve its peace forging work.

Rick and Kit have a 29-year-old daughter, Kacy, an elementary school teacher in Oakland, California.

About the Intercollegiate Tennis Association
The Intercollegiate Tennis Association (ITA), is committed to serving college tennis and returning the leaders of tomorrow. As the governing body of college tennis, the ITA oversees men’s and women’s varsity tennis at NCAA Divisions I, II and II, NAIA and Junior/Community College divisions. The ITA administers a comprehensive awards and rankings program for men’s and women’s varsity players, coaches and teams in all divisions, providing recognition for their accomplishments on and off the court. For more information on the ITA, visit the ITA website at www.itatennis.com, like the ITA on Facebook or follow @ITA_Tennis on Twitter and Instagram.