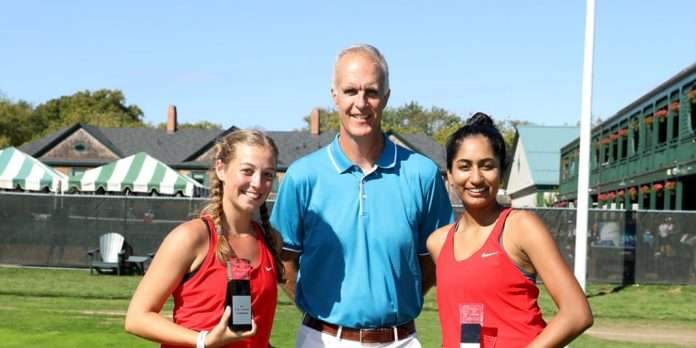 Thanks to their respective wins in Saturday’s semifinal round, Bowdoin’s Grant Urken and Claremont-Mudd-Scripps’s Jack Katzman will meet in the men’s singles final of the Michael Stich Flight at the 2018 Hall of Fame ITA Grass Court Invitational, held at the International Tennis Hall of Fame in Newport, Rhode Island.

Back in May in Claremont, California, Urken bested Katzman 6-3, 6-2 in the men’s singles final at the 2018 NCAA Division III National Tennis Championships, claiming the first individual national championship in Polar Bear history.

Nearly four months later, they’ll meet again, but this time on grass, which is a surface both players are still adjusting two after two days of competition.

“I’m excited,” said Katzman of the prospects of a return encounter with Urken. “He’s a great player, so it’s always fun to play someone who’s at that level. I’m to have to serve and return well, because he doesn’t give you much and he hits big, so I really need to be on my game.”

Claremont-Mudd-Scripps head coach Paul Settles said matchups like Urken-Katzman is why he was so eager to bring his team out to Newport to take part in the Hall of Fame ITA Grass Court Invitational.

“How great to start the year with some cross-region play, which we don’t get in the fall,” said Settles. “That’s really special. It’s two great players who are at the top of their games and it should be a lot of fun.”

In the Helena Sukova Women’s Singles Flight, it’ll be an all-Emory affair in Sunday’s final, as teammates Ysabel Gonzalez-Rico and Daniela Lopez each defeated a player from Washington & Lee in Saturday’s semifinal round. Gonzalez-Rico scored a 6-3, 6-0 win over Georgia Wright, while Lopez took a 6-1, 6-3 decision against Taylor Garcia.

“This has been an amazing experience,” said Gonzalez-Rico. “I’m so happy to be here.”

Emory also has a pair of players in the winner’s side of the Virginia Wade Flight. Defne Olcay defeated Melissa Strome of Carnegie Mellon 6-4, 6-3, and Lauren Yoon topped Annika Pandey of Chicago 3-6, 6-2, 1-0 (7).

In the Arthur Ashe Flight, Washington University in St. Louis teammates Radha Vishnubhotla and Konrad Kozlowski will collide in the final. Each won three-set contests on Saturday.

Doubles champions were crowned on Saturday, with Trinity (TX) and Carnegie Mellon taking home the men’s and women’s titles, respectively.

The 2018 Hall of Fame ITA Grass Court Invitational runs through Sunday, September 16, at the International Tennis Hall of Fame. Matches take place on the historic Bill Talbert Stadium Court and on the additional grass courts at the Hall of Fame. For more information, visit the event page and be sure to follow the conversation on social media, using the hashtag #ITAGrassCourt.