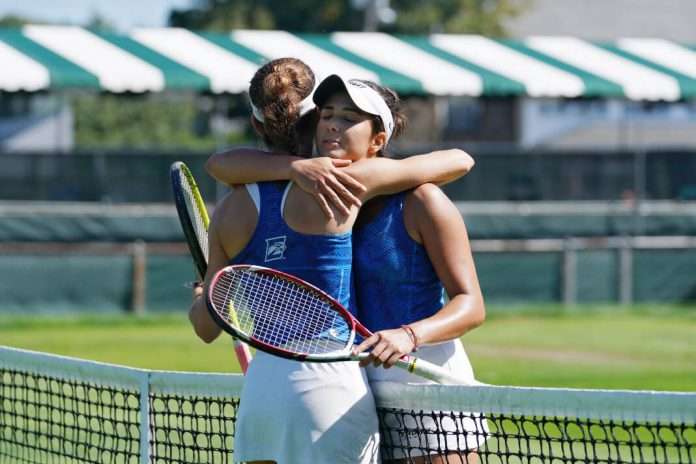 They also happened to be matched up against one another in Sunday’s women’s singles final of the Helena Sukova Flight at the 2018 Hall of Fame ITA Grass Court Invitational, held at the International Tennis Hall of Fame in Newport, Rhode Island.

Competing for a championship gets a little challenging when you’re playing your best friend, but Lopez and Gonzalez-Rico committed to playing the match all-out, and they did just that, displaying a high level of skill and competition throughout the two sets, which both went to Lopez, who claimed the championship with a 6-4, 7-6 (8) decision.

“It’s never fun to play a teammate, but we both went out there and left it all on the court,” said Lopez, a senior. “At the end of the day we’re best friends, and we’ll keep being that.”

Lopez said that she settled into the new environments on the International Tennis Hall of Fame grass courts after the opening day.

“Definitely have to say this was one of our favorite tournaments,” said Lopez. “The banquet and all of the food were incredible. The museum was awesome. We came out here to have fun and that’s what we did. It was a once in a lifetime experience.”

Katzman grabbed an early lead in the opening set and would go on to claim the opener 6-3. In the second set, Urken’s big serves carried the way to a 6-1 decision, setting the stage for a third set 10-point tiebreaker. Urken again rode his heavy service game to an early advantage and held on for a 10-5 decision to clinch the championship.

“I had to rely on my serve a little more on the grass,” said Urken. “Jack’s a great player, so it was tough to get a lot of balls by him. I’m glad it all worked out.”

Being the first Division III champion at the Grass Court Invitational means a lot to the Bowdoin senior.

“This was an awesome event and I’m appreciative of everyone that made it happen,” said Urken. “It’s cool that this happened for Division III and the sport as a whole, because this is a special area.”

Defne Olcay of Emory claimed the top honors in the Virginia Wade Flight, as she slipped past teammate Lauren Yoon 6-4, 5-7, 1-0 (5) on Sunday. In the Arthur Ashe Flight, Konrad Kozlowski won the all-Washington University in St. Louis contest, besting Radha Vishnubhotla 7-5, 7-6.

The 2018 Hall of Fame ITA Grass Court Invitational was held at the International Tennis Hall of Fame. Matches took place on the historic Bill Talbert Stadium Court and on the additional grass courts at the Hall of Fame. For more information, visit the event page and look back on social media content, using the hashtag #ITAGrassCourt.