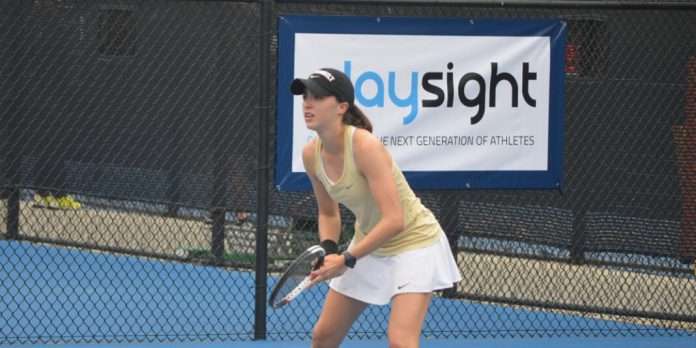 MALIBU, Calif. – There was no pre-match strategy session for Vanderbilt’s Fernanda Contreras and Guanarteme Nuez of UT Arlington before they teamed up for the first time on Thursday, September 20th, to compete in the Mixed Doubles event as part of the 2018 Oracle ITA Masters, hosted by Pepperdine University and Malibu Racquet Club in Malibu, California.

In fact, it was an early morning practice session that randomly introduced the would-be teammates for the first time as they prepared to play in the only mixed doubles event on the collegiate tennis schedule.

“We warmed up together for a bit on the court and I asked to use the court and he mentioned that he thought we were playing in doubles,” said Contreras, the No. 1 seed in the women’s singles draw. “We didn’t know each other at all, but once we stepped on the court we knew how to play doubles together. It was a lot of fun.”

Contreras and Nuez did find at least one commonality during their opening match, which they won by a 6-0 score.

“We both speak Spanish, so we were speaking Spanish to each other,” said Contreras, who won her first round singles match 6-0, 6-0 over Reka Szentas of Alabama State.

Contreras and Nues returned to the courts in the evening for Round of 16 action, where they defeated Matt Kuhar of Bryant and Anna Grigoryan of LIU Brooklyn 6-4 to reach Friday’s Quarterfinals.

Mitch Harper of Virginia Tech, the No. 8 seed in men’s singles, advanced to the Round of 16 with a 6-3, 6-0 win against Jordan Benjamin of Dayton, and is also still in the Mixed Doubles draw, as he and partner Estela Perez-Somarriba of Miami won both of their matches on Thursday.

“I’m very lucky to have the opportunity to play mixed doubles, as we don’t get that in any other tournament during the year,” said Harper, winner of the 2017 Milwaukee Tennis Classic. “It was good fun.”

“I think it’s a great competition,” said Schretter, who is the No. 9 seed in the men’s singles draw and won his opening round contest in straight sets. “I played last year (reached the final with Samantha Harris of Duke) and it’s a lot of fun and something I look forward to.”

“I think it’s really cool and there should be more mixed doubles events,” said Jones, the No. 2-ranked player and No. 7 seed in the women’s singles draw, who won her first round match over Grigoryan 6-2, 6-3. “Both men and women are competing in college tennis, why not join it together and do that? I think everyone here looks forward to it and it’s a really cool event.”

In opening round singles play, the top eight seeds for men and women advanced through to the Round of 16. Friday’s action will feature two rounds of singles play, with competition slated to begin at 10 a.m. PDT.