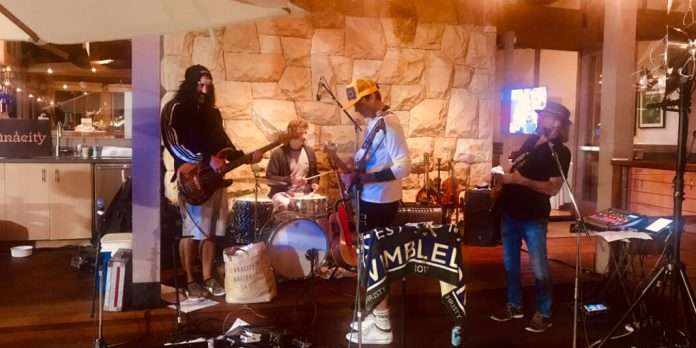 MALIBU, Calif. – The Oracle ITA Masters prides itself on providing unique experiences to not only the student-athletes competing in the matches, but to the fans that attend to watch the competition as well.

Prior to – and following – Friday night’s Mixed Doubles semifinals at the Malibu Racquet Club (the Oracle ITA Masters is the only collegiate event to feature a mixed doubles tournament) in Malibu, California, spectators were treated to the sounds of live music, courtesy of Josh Osswald and Friends. The night, dubbed Friday Night Live, couldn’t have been more perfect, with a beautiful late-September sunset painting a serene picture, while a calming cool breeze blew in from the nearby Pacific Ocean.

Sven Lah of Baylor and Michaela Bayerlova of Washington State defeated Stefan Milicevic of Minnesota and Kate Fahey of Michigan 8-4 to reach Saturday’s Mixed Doubles championship, where they’ll face Yuya Ito of Texas and Lisa Marie Rioux of Oklahoma State, the top-seeded team in the draw. Ito and Rioux earned a walkover in the semifinals against Nicolas Moreno De Alboran of UC Santa Barbara and Adrijana Lekaj of Pepperdine.

Following two rounds of singles play, the men’s and women’s semifinals are set for Saturday afternoon. The singles championship matches will air live on ESPN3 and the ESPN App, with later airings on ESPNU at 2 p.m. PDT, on Monday, September 24th and Tuesday, September 25th.

Mitch Harper of Virginia Tech, the No. 8 seed scored a three-set victory over No. 1 seed Ito of Texas 7-6 (4), 3-6, 6-1. Sixth-seeded Laurens Verboven of USC scored a 6-3, 6-3 decision over Matt Kuhar of Bryant to advance to the semifinals, where he’ll face Harper.

Christian Sigsgaard the No. 5 seed from Texas, took down No. 3 Aleksandr Kovacevic of Illinois 6-4, 6-1. De Alboran of UC Santa Barbara, the No. 7 seed in the tournament, defeated No. 2 Daniel Cukierman of USC in three sets 6-4, 4-6, 6-4. Moreno De Alboran will take on Sigsgaard in the semifinals.

The top seed in the women’s singles draw, Fernanda Contreras of Vanderbilt, defeated Lauren Proctor of Winthrop 6-1, 6-3 in the quarterfinals. Contreras will face No. 4 seed Estela Perez-Somarriba of Miami in the semifinals. Perez-Somarriba topped UCLA’s No. 5-seeded Elysia Bolton 6-4, 6-0 in the quarterfinals, and Rosie Cheng of William & Mary 6-2, 6-2 in the Round of 16.

Evgeniya Levashova of Pepperdine, the No. 6 seed, is through to the semifinals, following her 6-2, 6-2 win over No. 3 Michaela Bayerlova of Washington State in the quarterfinals. Second-seeded Kate Fahey of Michigan outlasted Salma Ewing of USC in an intense three-set quarterfinal 7-6 (1), 2-6, 7-6 (3), and will face Levashova in the semifinals.

Tennis Student-Athletes Nominated for NCAA Woman of the Year Award