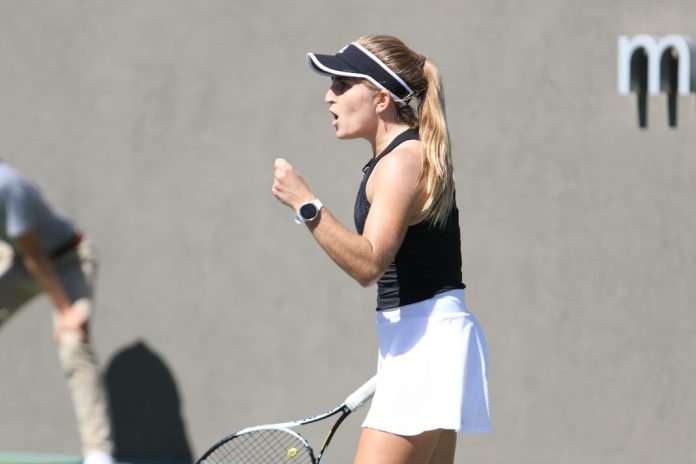 MALIBU, Calif. – It’s been quite the week at the 2018 Oracle ITA Masters for Miami junior Estela Perez-Somarriba.

The 2018 ITA Player to Watch, ACC Player of the Year and No. 4 seed has looked impressive on the courts, including a 6-2, 7-6 (2) win over No. 1 seed Fernanda Contreras of Vanderbilt in Saturday’s women’s singles semifinal contest at Malibu Racquet Club in Malibu, California, and she’s also had some fun away from competition.

“I’m very happy that Oracle and the ITA decided to organize a tournament in Malibu,” said Perez-Somarriba. “It’s a great experience for many players. I went to the Pacific Ocean for the first time, which was a great experience and my coach (Paige Yaroshuk-Tews) took me to the Santa Monica Pier.”

When two elite players such as Perez-Somarriba and Contreras meet, Yaroshuk-Tews says the margin between victory and defeat is oftentimes narrow.

“Two very different styles. I think Estela was just able to control the court a little better,” said Yaroshuk-Tews. “She snuck in and took some chances at the right times.”

Perez-Somarriba will meet Pepperdine’s Evgeniya Levashova in Sunday’s final. The No. 6 seed topped No. 2 Kate Fahey of Michigan 6-2, 1-6, 6-2 in the semifinals. The 2018 West Coast Conference Freshman of the Year has only dropped one set – the second to Fahey – in the tournament thus far.

Laurens Verboven of USC, the No. 6 seed earned his spot in the men’s singles final with a 7-5, 1-6, 6-2 victory over No. 8 Mitch Harper of Virginia Tech in the semifinals.

Facing Verboven in the final will be Nicolas Moreno De Alboran of UC Santa Barbara. The No. 7 seed rallied from a set down to defeat No. 5 Christian Sigsgaard of Texas 2-6, 7-5, 6-4 in the semifinals.

Sunday’s women’s and men’s singles championship matches will air live on ESPN3 and the ESPN App, starting at 11:30 a.m. PDT, with later airings on ESPNU at 2 p.m. PDT, on Monday, September 24th and Tuesday, September 25th.

Yaroshuk-Tews says this is a great opportunity to showcase college tennis on a national platform.

“It’s amazing to have that exposure for college tennis and we’re very excited,” said Yaroshuk-Tews.

Mixed Doubles champions were crowned on Saturday night at Malibu Racquet Club. Top-seeded Yuya Ito of Texas and Lisa Marie Rioux of Oklahoma State took on No. 6 seed Sven Lah of Baylor and Michaela Bayerlova of Washington State met for the title. Ito and Rioux claimed the Mixed Doubles hardware with an 8-3 victory.

ITA and Universal Tennis Announce UTR/ITA National Player of the...