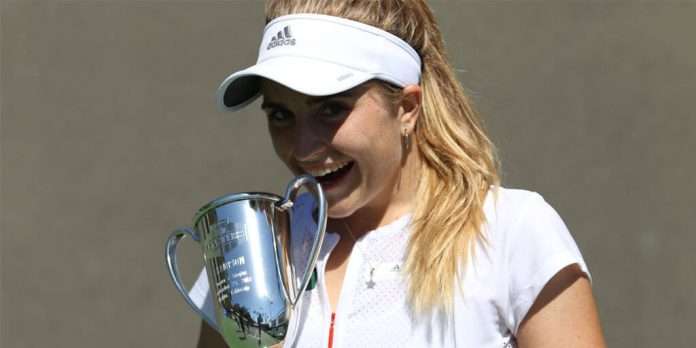 MALIBU, Calif. – With a nationwide audience watching on ESPN3 and the ESPN App, the men’s and women’s singles finals of the 2018 Oracle ITA Masters took place under pleasant mid-September conditions at the scenic Malibu Racquet Club in Malibu, California.

The two champions not only earned an ITA National Championship with the Masters victory but guaranteed spots in the 2018 Oracle ITA National Fall Championships, which will take place November 7-11, at the Surprise Tennis & Racquet Complex in Surprise, Arizona.

The women took to the court first on Sunday, with No. 4 seed Estela Perez-Somarriba of Miami facing No. 6 seed Evgeniya Levashova of Pepperdine.

A back-and-forth first set saw Perez-Somarriba eventually take control and grab the opener 6-4. Perez-Somarriba raced out to a 4-0 lead in the second set, moving closer to claiming the championship. Levashova battled back to 4-3, but Perez-Somarriba closed out the match by winning the next two games to take the set 6-3 and earn the 2018 Oracle ITA Masters Women’s Singles Championship.

“It was a battle (on Sunday),” said Perez-Somarriba. “I’m very happy to get the win.”

The newly-crowned champion said this week of tennis in Malibu will be beneficial to her entire season.

“The fall is really important to start to get the feeling of competing,” said Perez-Somarriba. “Thank you to Oracle and the ITA for making this event possible.”

In the men’s singles final, No. 6 seed Lauren Verboven of USC took on No. 7 seed Nicolas Moreno de Alboran of UCSB.

The first set was ultimately decided in a tiebreak, with Moreno de Alboran grabbing a 7-4 decision in the breaker to take the set. The two competitors would head to a tiebreak in the second set as well, and Verboven forced the deciding third set by rallying from 4-2 down to take the tiebreak 7-4.

In the championship set, Verboven snagged an early 3-2 advantage, went ahead 5-3 after a hold of serve and broke Moreno de Alboran’s serve to win the set and match 6-3. Verboven is the second straight Trojan to claim the men’s singles Oracle ITA Masters title, with Brandon Holt earning the winner’s trophy in 2017.

Consolation singles champions were also crowned on Sunday. In the men’s final, August Holmgren of San Diego and Olivier Stuart of Mercer square off, with Holmgren taking a 6-1, 6-4 decision. In the women’s singles final, Katarina Kozarov of Furman defeated Bianca Mok of Denver in straight sets 7-5, 6-4.