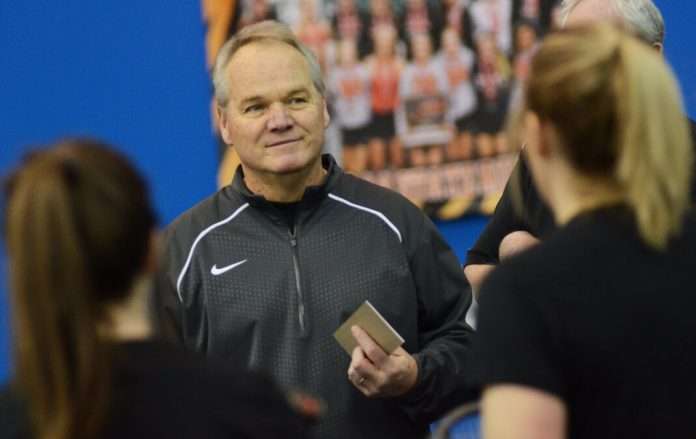 “It is with sadness we share that long-time Huskies tennis coach Jerry Anderson passed away today,” SCSU Director of Athletics Heather Weems said.  “Jerry cared deeply about St. Cloud State University and the success of students both as tennis players and in his role with University College. Our thoughts are with his family, friends, and loved ones, as well as our tennis players and alumni on their significant loss. He made a difference in many lives.”

Anderson joined the St. Cloud State athletics department in 1998 and served as both the men’s and women’s tennis coach during his tenure with the program. Anderson was the head coach of the men’s tennis team from 1998 to 2016, posting a career record of 308-150 during his time with the program. Under Anderson’s direction, the SCSU men’s tennis team won nine North Central Conference championships and received 12 consecutive NCAA DII tournament bids from 2001 to 2012.  He was hired as the St. Cloud State women’s tennis coach in 2006 and served in this role until his death in 2018.

In 14 seasons with the Huskies women’s tennis program, Anderson posted a career record of 198-136, with two Northern Sun Intercollegiate Conference (NSIC) titles and two appearances in the NCAA Tournament, bringing his combined career wins total to 506. His most successful season with the women came in 2009 when he guided St. Cloud State to its first ever NSIC Championship and was named the conference Women’s Tennis Coach-of-the-Year for his efforts. That same season, Anderson helped the team set the program record for single-season wins (26) as the Huskies went 13-1 in NSIC play. Additionally, St. Cloud State hosted the opening round of the NCAA Tournament that same season.

The 2010 season was also a success for Anderson, as he helped the Huskies women’s tennis team win back-to-back NSIC Championships after finishing the season with a 23-7 record. In addition to winning its second consecutive conference title, St. Cloud State earned its second straight bid to the NCAA Tournament, advancing to the Sweet 16 for the first time in program history. The Huskies historic win to advance to the NCAA Championship round, a 5-2 victory over Mesa State, also served as the 100th win in Anderson’s career with the women’s team.

SCSU women’s tennis posted 11 seasons from 2006 to 2018 at or above the .500 level during Anderson’s tenure.  The team was awarded the ITA All-Academic Team honor in 2017 and 2018, while former Huskies standout Alexie Portz (St. Cloud, Minn. / Tech) was named to the Google Cloud Academic All-America team in 2018.

In addition to his duties as tennis coach at St. Cloud State, Anderson worked on campus since 1985 and most recently served as a director in the University’s Academic Advising Department.

Visitation will take place from 4-8 PM on Tues, Oct 2 at the Church of St Henry, 1001 7th St E, Monticello.  Mass of Christian Burial on Wed, Oct 3 at 10:30 a.m. with visitation one hour prior at the church. Interment at St. Henry’s Catholic Cemetery.