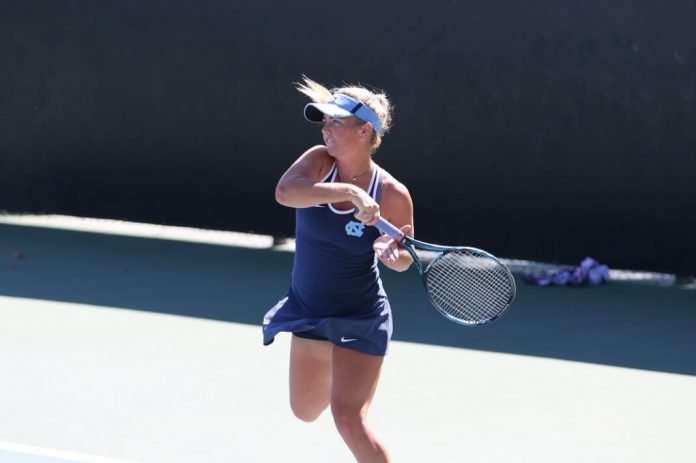 PACIFIC PALISADES, Calif. – Top-seeded Makenna Jones from the University of North Carolina had to feel a little concerned when she glanced for the first time at the singles main draw before play began at the 2018 Riviera ITA Women’s All-American Championships on Thursday.

The Greenville, South Carolina, resident Jones, a junior who led the Tar Heels to the 2018 ITA Division I National Women’s Indoor Team Championship, came out strong posting a 6-0 first set, before Hart rallied to capture the second set 6-4, with Jones closing it out by the same 6-4 score to advance to the Round of 16 Friday at the event being held at the same location in Pacific Palisades for the 34th consecutive year.

An ITA All-American in singles, Jones will next face LSU’s Eden Richardson on Friday. The unseeded Richardson got past the Michigan’s Kate Fahey, 6-3, 6-2, and later in the day advanced to the doubles quarterfinals with Tigers’ partner Jessica Golovin.

“I thought I played pretty well all the way through, especially since I was so nervous playing in this event for the first time,” said Richardson, 20, a sophomore from near Liverpool, England. “I’ve never been to California and can’t believe how nice it is here.”

Oklahoma State’s Katarina Stresnakova pulled off the upset of the day as the Slovakina Cowgirl senior beat No. 2-seed and 2018 Oracle ITA Masters champion Estela Perez-Somarriba from the University of Miami 7-6 (4), 1-6, 6-3.

Perez-Somarriba was one of three top-eight seeded players to lose first-round matches Thursday as Meible Chi of Duke took out No. 3 Carla Touly of Florida State University, 6-3, 6-1 and Stanford University’s Emily Arbuthnott needed three sets to beat No. 8-seeded Marie Leduc of Clemson, 2-6, 7-6 (5), 6-2. The No. 1-seeded doubles team in Arbuthnott and Michaela Gordon, were defeated in the Round of 16 by the Kansas duo of Nina Khmelnitckaia and Janet Koch 8-5.

Syracuse University’s Gabriela Knutson is the tournament’s No. 5-seed and is playing her fourth consecutive Riviera ITA All-American Championships event. She posted a 6-4, 6-2 win over UC-Berkeley sophomore Julia Rosenqvist.
“My freshman year I played qualies in doubles, second year main draw doubles and last year qualies in singles and main draw doubles,” the senior from the Czech Republic said. “I’m familiar with the scenery and this is my favorite tournament of my entire year.”

Half of the No. 2-seeded doubles team, Knutson and partner Miranda Ramirez, were taken out later in the day by the University of Kansas team of Anastasia Rychagova and Sonia Smagina, 8-6.

Knutson next meets unseeded Emma Davis of Wake Forest University. Davis, who grew up in Boston, said she was unaware of her opponent Veronica Miroshnichenko of Loyola Marymount. “It kind of helps not knowing who you are playing because you have a fresh mindset and not knowing their strengths and weaknesses you can just play your own game,” she said.