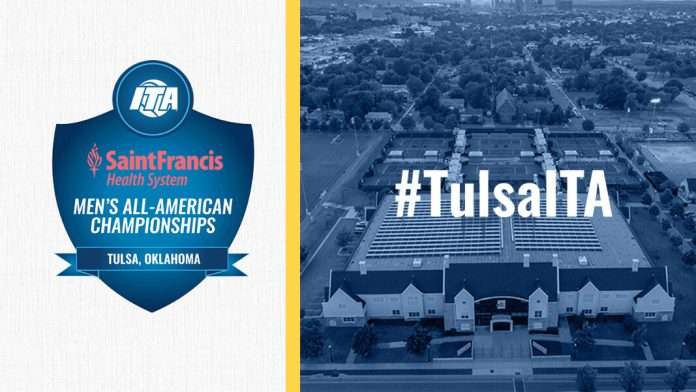 The University of Tulsa staff worked feverishly to dry the courts of the Michael D. Case Tennis Center to allow matches on Thursday to begin – and stay – outdoors. Following a two-hour weather delay, matches did go out and the action intensified as the skies cleared and temperatures rose.

The day’s biggest upset belonged to a doubles team that originally wasn’t in the main draw. California’s Jacob Brumm and Yuta Kikuchi received a second chance when they were slotted into the doubles draw via a Lucky Loser provision, and the duo made the most of their second opportunity, defeating No. 1-seeded Nuno Borges and Strahinja Rakic of Mississippi State 6-3, 4-6, 1-0 (5).

Sean Hill and Jeffrey Hsu of BYU scored a big win of their own, taking down another seeded team from Mississippi State in the opening round. Hill and Hsu bested No. 4 seeds Niclas Braun and Giovanni Oradini 6-4, 3-6, 1-0 (4).

Three of the top eight seeds in the singles draw were upset on Thursday. Simon Baudry of Clemson took down No. 4 seed Timo Stodder of Tennessee in three sets 7-5, 2-6, 6-4 and Paul Jubb of South Carolina defeated No. 5 seed Cameron Klinger of Vanderbilt 6-3, 3-6, 6-0. Ricky Hernandez-Tong of New Mexico outlasted No. 7 seed Johannes Ingildsen of Florida 3-6, 6-4, 6-1.

Baudry takes on Alex Brown of Illinois (defeated Adria Soriano Barrera of Miami 6-4, 6-4 on Thursday) in Friday’s Round of 32, while Jubb will face Dartmouth’s Charlie Broom in the Round of 32. Broom notched a 6-4, 6-2 decision over Barnaby Smith of Texas A&M in the opening round. Hernandez-Tong meets Will Little of Baylor, who scored a 6-4, 7-5 victory over North Carolina’s Brian Cernoch.

The very top of the men’s singles draw all advanced to Friday’s Round of 32. Top-seeded Nuno Borges of Mississippi State topped John McNally of Ohio State 6-3, 6-4, while No. 2 seed Mazen Osama of Alabama won in straight sets over 2018 Oracle ITA Masters finalist Nicolas Moreno de Alboran of UC Santa Barbara 6-3, 6-3. The No. 3 seed in the ITA Men’s All-American Championship, Giovanni Ordaini of Mississippi State, battled back from a set down to turn back Minnesota’s Stefan Milicevic 3-6, 6-3, 6-1.