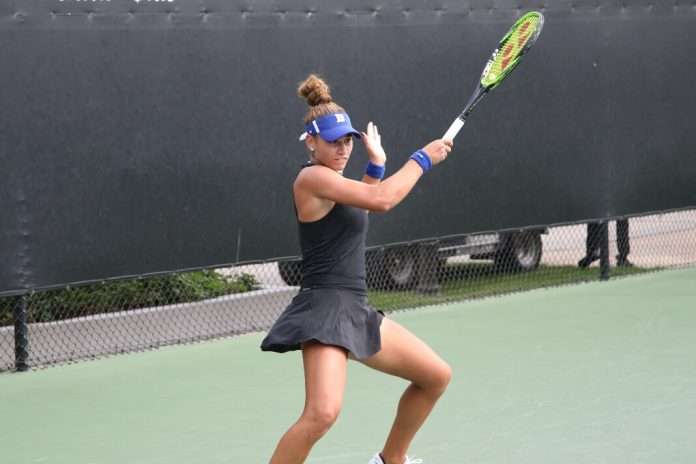 The two seniors with contrasting styles went back and forth with the aggressive Whittle just a bit steadier in the end as her hand was raised in victory over the defending champion Contreras 3-6, 7-5, 6-4, much to the delight of an enthusiastic Riviera Country Club crowd who cheered equally for both players.

“That was the match of the tournament,” longtime ITA All-American Referee Jane Goodman said.

A qualifier, Whittle won her seventh singles match in five days, duplicating a feat Contreras accomplished last year as she also had to come through qualifying for a right to play for the title. Whittle will face Duke freshman Maria Mateas in Sunday’s singles final starting at 11 a.m. In her first college tournament, Mateas upset top-seeded Makenna Jones of North Carolina 6-1, 6-4 in the other semifinal.

“I’d probably rather not go back out there again today,” said a teary-eyed Whittle, who won two matches on Friday and this week became the first Gonzaga player in history to make the main draw at any ITA National Championship event. “I’m just really happy.”

On the Gonzaga website, Whittle said just making it into the qualifying tournament at the All-American a year ago was one of her biggest tennis accomplishments. Now she’s in the final of a tournament her mother Kristi Niles once played in some 25 years ago for Loyola Marymount University.

“I give all the credit to the Gonzaga player,” said Macdonald. “She’s had an incredible tournament. She’s rock solid. Fern fought and it didn’t go her way, but hats off to Gonzaga’s Whittle today. Her returns, her overheads. She was just so solid.”

“It’s tough because it’s lower and its harder to attack on,” Whittle said of Contreras’ backhand. “But it just forced me to stay patient and wait for the right time to be aggressive and come forward. She hit some great shots. It could have gone either way.”

Whittle added: “With the way my game is, I can’t get into that slice game because then I just wouldn’t be playing my game. I think it did help that I came forward because it did put pressure on her, especially for the big points.”

A former Fed Cup player for Mexico, Contreras, whose grandfather Francisco Contreras was a two-time NCAA doubles champion for USC in the mid-1950s, was attempting to become the fifth player to repeat as singles champion in the event’s 34-year history.

In the day’s first semifinal, the ITA’s top-ranked freshman Mateas was taking on a player who – like Contreras and Whittle – have family members who played college tennis in Makenna Jones.

Jones’ father Kelly Jones won two NCAA doubles titles at Pepperdine in 1984 and 1985, and was once ranked No. 1 on the ATP World Tour in doubles. He is currently the head men’s tennis coach at Furman University. Jones’ mother Tami Whitlinger-Jones won back-to-back NCAA team titles starring at No. 1 for Stanford. Whitlinger-Jones played nine years on the WTA Tour, competing in 38 grand slam tournaments, and winning three tour titles.

“I think we were both pretty tired,” Mateas said. “I think we both didn’t play well in the first set, but the second set was pretty high-level tennis.”

In one year, Jones went from losing in the final round of qualifying to being the top-seeded player at the All-American.

“I played her maybe four of five years ago in the juniors and haven’t seen her since, so completely different and I didn’t really know exactly what to expect,” Jones said of Mateas. “I’ve been so focused on my matches I haven’t seen her play yet. I was a little bit nervous. I have a little bit of a stiff back and my serve has been letting me down.”

Mateas is the first Duke All-American finalist since Daniela Bercek in 2005. She will attempt to become the first Blue Devil to win the event since Kelly McCain in 2002.

In the doubles final to follow the singles, the University of Kansas duo of Nina Khmelnitckaia and Janet Koch will face Stanford’s Caroline Lampl and Kimberly Yee. In an All-Kansas semifinal, the Jayhawks’ Khmelnitckaia and Koch beat Wichita State’s Fatima Bizhukova and Marta Bellucco, 6-3, 7-6 (4).

Lampl and Yee came back to defeat the No. 7 seeded team of Sofia Blanco and Lisa Marie Rioux of Oklahoma State, 6-7 (1), 6-3, 12-10 in the days’ final match. Lampl and Yee were down in the 10-point breaker 5-1, 6-2, and 7-3 before coming back on some key returns by Lampl and strong net play by Yee. The Cardinal pair are trying to be the first Stanford doubles team to win the All-American since Nicole Gibbs and Mallory Burdette did so in 2011.