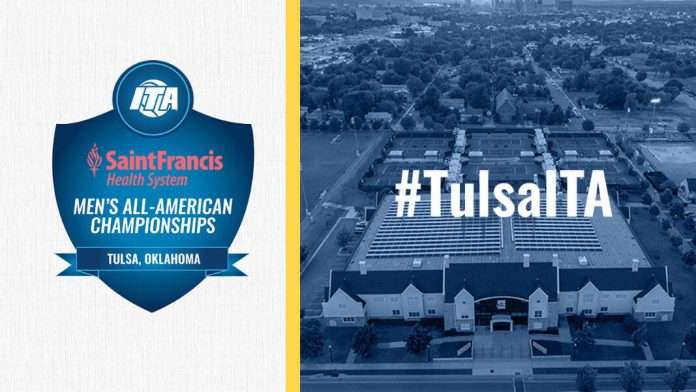 For the second straight day, Wolf didn’t allow his opponent to earn a single game in the opening set, as he jumped out to a 6-0 lead on No. 1 seed Nuno Borges of Mississippi State on Monday in their men’s singles final at the Michael D. Case Tennis Center on the campus of the University of Tulsa.

And, just like Sunday’s semifinal victory, Wolf went all the way into a tiebreaker in the second set, which he won 7-3 to claim the first ITA Men’s All-American Singles Championship in Ohio State history.

“It’s always a little unnerving when you win a set (6-0), because you know your opponent has nothing to lose,” said Wolf. “I tried to stay consistent with my game and not change anything around and it worked out.”

The champion is excited to bring his hardware back to Columbus.

“This means so much to me and it means a lot to bring this championship home to my team,” said Wolf. “Someone said this is the first time a player from Ohio State has won the championship here in Tulsa, so it’s really an honor for me to take the title home.”

The men’s doubles championship between Baylor’s Jimmy Bendeck and Sven Lah and Ohio State’s Alex Kobelt and Kyle Seelig was a matchup of a team that fought through the qualifying draw (Baylor) and one that more than made the most of its second opportunity to play, receiving a Lucky Loser into the main draw (Ohio State).

The two teams battled into a third-set 10-point tiebreak, where Baylor raced out to a 5-1 lead and ultimately claimed the set 10-4 and championship by a 6-7 (4), 7-6 (4), 1-0 (4) score. The doubles title is the first Men’s All-American National Championship in program history for the Bears.

Christian Sigsgaard of Texas capped off an impressive run through the consolation singles draw, topping Ohio State’s John McNally 6-1, 6-2 in Monday’s final. Both competitors earned an invitation to the 2018 Oracle ITA National Fall Championships by making the consolation championship match.

For Sigsgaard, who went 8-1 on the week in Tulsa between the qualifying, main and consolation draws, getting that all-important court time has been important for his growing confidence.

“The main goal with the fall season is to get a lot of matches in,” said Sigsgaard, who also reached the semifinals at the 2018 Oracle ITA Masters. “It definitely helped playing through the Consolation draw and continue working on my game. There’s a lot of good players out here, so every match is an opportunity to get better and get some good wins. I like being here in Tulsa; it’s a great facility.”