JUCO
Nicolas Rousset, the No. 4 seed from Seward County Community College, took down defending ITA Cup JUCO men’s singles champion Marcus Walters of Tyler JC 7-5, 6-4 in Friday’s semifinal round. Rousset will face another Tyler JC in Saturday’s final, as No. 3 seed Alex Parker advanced with a 2-6, 7-6 (6), 6-3 victory over No. 2 seed Toru Horie of ASA Miami.

The women’s singles final pits No. 1 seed Maria Genovese of Tyler Junior College against No. 2 seed Molly Helgesson of ASA Miami. Genovese won her Friday semifinal contest against ASA Miami’s Tatiana Simova 6-3, 6-1, while Helgesson advanced with a 7-6, 6-3 decision versus No. 3 seed Anna Brogan of Tyler JC.

Michaela Krauskova and Tatiana Simova, the No. 2-seeded team out of ASA Miami, advanced to the JUCO women’s doubles final with a 7-5, 6-2 victory over teammates and No. 3-seeded Soomin Kim and Molly Helgesson. The No. 4 seed from ABAC, Agustina Diaz and Vasevi Ganesan Shanthi also earned their place in Saturday’s final round with a 7-5, 6-2 semifinal victory against top-seeded Anna Brogan and Maria Genovese of Tyler JC.

NAIA
The women’s singles bracket saw the top two seeds hold serve on Friday in the semifinals, setting up a Saturday showdown for the divisional title. Top-seeded Madeline Bosnjak of Georgia Gwinnett will take on No. 2 Anais Gabriel of Keiser University. Bosnjak defeated Zlata Shuraeva of William Woods 6-2, 6-2 in the semifinals. Gabriel also won her Friday match in straight sets, turning back teammate and No. 3 seed Daniela Farfan 6-2, 6-4.

It’ll be an all-Georgia Gwinnett men’s singles final, as No. 1 Mika Kosonen will take on teammate and No. 2 seed Federico Herrera Duran. Kosonen advanced to the final with a hard-fought 6-2, 4-6, 7-6 (2) victory over No. 4 Arthur Bonnaud of Keiser, while Herrera Duran won in straight sets 6-0, 6-3 over Radu Popa of the University of Northwestern Ohio.

Georgia Gwinnett will also emerge victorious out of the men’s doubles bracket, as its two participating teams are through to the final. Top-seeded Ayed Zatar and Valentino Caratini won 6-1, 6-2 over No. 4 Olivier Koeng and Riccardo Ferraris of Keiser, while No. 2 Federico Herrera Duran and Rafael Coutinho won 6-4, 6-3 against No. 3 seed Jesse Miritello and Enzo Douillac of Arizona Christian.

Top-seeded Nadine Geschke and Sarah Urbanek of San Diego Christian moved on to the finals following a 6-4, 6-4 victory over Union College (KY) Ljiljana Pajcin and Isidora Petkovic. Also advancing to the championship match was the No. 3-seeded team from Brenau University (GA), Peeraya Charoensirisutthikul and Rebecca Pijls. They bested the No. 2 team from William Woods, Ana Zavala and Zlata Shuraeva 6-4, 6-3 in the semifinals.

Jemison bounced back in doubles, as he and Adrien Bouchet topped Patrick Whaling and Chase Johnson of Gustavus Adolphus 7-5, 6-1 in the semifinals. The Emory duo will face Bowdoin’s Yangeng Jiang and Justin Wang in the final. The Polar Bears beat the Caltech team of James Wei and Varun Shanker 4-6, 6-3, 1-0 (5) in the semifinals.

It’ll be No. 1 versus No. 2 in the women’s singles final, with top-seeded Ysabel Gonzalez-Rico of Emory taking on Lauren O’Malley of John Carroll University. Gonzalez-Rico bested No. 4 seed Venia Yeung of Wesleyan 6-3, 6-1, while O’Malley downed No. 3 seed Caroline Casper of Pomona-Pitzer 6-2, 6-4 in Friday’s semifinals.

A day after upsetting the No. 1 seed, Carnegie Mellon’s Danna Taylor and Melissa Strome are through to the Division III women’s doubles final, following their 6-0, 6-2 semifinal victory over No. 4 Jessica Liu and Madeleine Paolucci of Case Western Reserve. The Carnegie Mellon duo will face No. 2 seed Caroline Cox and Catherine Allen of Claremont-Mudd-Scripps, who defeated Emory’s Ysabel Gonzaelz-Rico and Jessica Fatemi 6-0, 7-6 (4) in the semifinals.

Defending Division II men’s singles ITA Cup champion Kiranpal Pannu moved a step closer to defending his title with a straight set win in the semifinals on Friday. Pannu, the No. 1 seed from Columbus State, topped Franco Oliva of Northwest Missouri State 6-3, 6-4. Facing Pannu in Saturday’s final will be the No. 2 seed from Barry University, Pierre Montrieul. Montrieul won his semifinal tilt with Arthur Figuriere of Bluefield State College 6-2, 6-0.

Filip Kesina and Jakob Schnaitter, the No. 3 seeded men’s doubles team from Azusa Pacific, advanced to Saturday’s final with a marathon 6-4, 1-6, 1-0 (11) win over No. 2 Alejandro Valarezo Plaza and Paul Haase of Washburn. Facing Azusa Pacific will be the No. 1 seed from Columbus State, Zach Whaanga and Alvaro Regalado. They won their Friday semifinal against No. 4 seeded Andres Donayre and Juan Ortiz Couder of Embry-Riddle 6-2, 2-6, 1-0 (4).

The women’s doubles final features No. 4 Beatriz Lopez and Marleen Tilgner of Columbus State taking on No. 2 seed Zuza Maciejewska and Verena Schmid of Barry. Lopez and Tilgner won their semifinal tilt over Washburn’s Logan Morrisey and Alexis Czapinski 6-1, 6-2 and Maciejewska and Schmid scored a 6-0, 6-4 victory against Nikol Alexeeva and Anna Novikova of Indianapolis.

By the Numbers: Week 10 of the ITA Fall Circuit 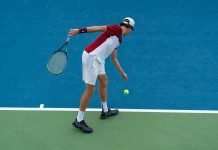 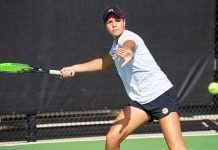