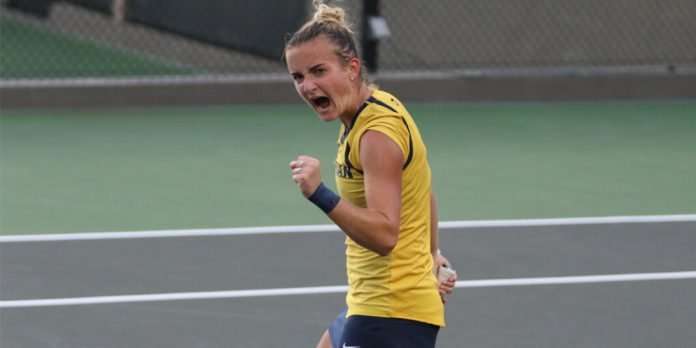 SURPRISE, Ariz. – Whether it’s stepping onto the tennis courts or engaging in a game of Scrabble, you can be certain of one thing:

Kate Fahey is playing to win.

The University of Michigan senior from Fair Haven, New Jersey, is hard to miss when she’s competing on the courts for the Wolverines. From fist pumps to a booming “come on”, one immediately gets a sense for the intensity with which Fahey plays the sport.

“I think it’s always been that way,” said Fahey of her competitive drive. “My mom would tell me that when I was younger, I was super competitive in everything, even board games. It shows a lot on the court and I think it helps me a ton, but yeah, I’m pretty serious.”

So serious that she may or may not scare even her teammates.

“My teammates joke around that they’re scared of me, but I’m never against them, just into my match and just want to compete.”

That competitive spirit has largely served Fahey well. The 2018 Big Ten Athlete of the Year entered her senior year with a 94-23 record in singles and 63-38 mark in doubles. She reached the 2018 Oracle ITA Masters semifinals and is the No. 11 seed in the singles draw of the 2018 Oracle ITA National Fall Championships , while also competing in doubles with senior teammate Brienne Minor.

In Thursday’s Round of 32 match at the Surprise Tennis & Racquet Complex, Fahey bested Florida’s McCartney Kessler 6-0, 6-3 to advance to Friday’s Round of 16, where she’ll face another SEC opponent, Georgia’s Marta Gonzalez.

“I am feeling really good,” Fahey said of the state of her game entering the National Fall Championships. “I came off a good week in Michigan, where we hosted (ITA Midwest Regionals. Fahey won the singles title and doubles title with teammate Minor) and had a good week there, so definitely was coming off a lot of momentum. I’m feeling confident in my game style and I think the key for me is stepping up, because I can always rely on my defense.”

“From when she stepped on the court, you knew that she was someone that didn’t want to lose a point,” said Bernstein. “You could also tell how much she loved playing tennis.”

With Fahey, Bernstein has been focused on harnessing Fahey’s intensity and competitive drive.

“Calming (the intensity) down a little bit has been a focus, because sometimes she a little too intense and it doesn’t help her,” said Bernstein, now in her 12th year as Michigan head coach. “So, if we can get her in the right place where she’s competing … she’s perfect for college tennis.”

“In juniors I was pretty fiery and my freshman year, I definitely had a temperament for sure. Ronni and (Teryn) have helped me tremendously through that. They’ve been patient with me and have had a lot of faith in me through the years and haven’t given up on me. I’ve been pretty tough. My temperament has helped me, but it’s also a detriment to my game, so just trying stay even keel and be too up or too down.”

While Fahey has learned to control her emotions on the court, she’s also taken to embracing the role of team leader with her doubles partner, Minor.

“Bri and I came in this year and realized that now we’re the leaders,” said Fahey. “The seniors that came before us were great role models for us, so having those examples has been really great. We have an amazing group of nine girls, so they don’t make the leadership part too hard.”

Added Bernstein: “It’s been unreal with her and (Brienne Minor) our two seniors. They’ve both done so much for our program, but they’re different people. Kate is someone that really cares a lot about the team and wherever she plays she’s going to be a tough out because she competes and wants to win every single point.”