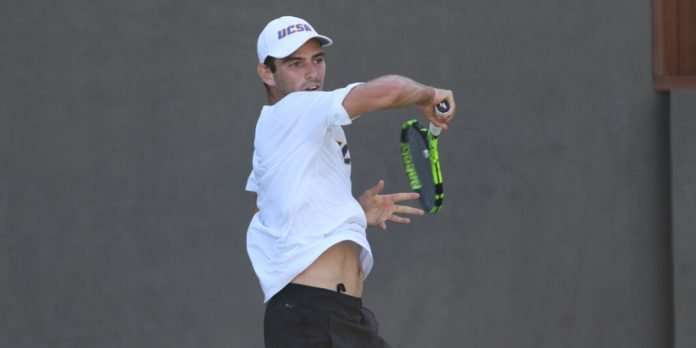 SURPRISE, Ariz. – The fall portion of the collegiate tennis season offers the top singles players and doubles teams several opportunities to showcase their abilities on a national platform.

UCSB’s Nicolas Moreno de Alboran has certainly made the most of his chances to do just that in what is the senior’s final fall campaign. He made run into the final of the season’s first national championship, and now at the 2018 Oracle ITA National Fall Championships, Moreno de Alboran is again performing at a high level.

“It’s been a great fall for me,” said Moreno de Alboran, who entered his senior campaign with a career-best No. 32 Oracle ITA National Singles Ranking. “It all started for me at the Oracle ITA Masters; I had a great tournament there, reaching the final. These tournaments are what you work for each day with your teammates, so I’m just really happy I was able to qualify and come (to Surprise) and represent my teammates and the school.”

The three-time First Team All-Big West honoree is through to the Round of 16 in the men’s singles draw. On Thursday, at the Surprise Tennis & Racquet Complex, host of the 2018 Oracle ITA National Fall Championships, the eighth-seeded Moreno de Alboran recorded a 6-3, 6-4 victory over Virginia’s Ryan Goetz to advance to Friday’s Round of 16.

The seasoning that comes with spending close to four years on a college campus has benefitted Moreno de Alboran’s game.

“I feel like I’ve matured more through the years as my college career has gone by,” said Moreno de Alboran, who received an at-large bid into the Oracle ITA National Fall Championships. “I’ve matured on the court mentally, and I’ve gotten stronger physically, so I feel like those two aspects have really helped my game and the way I play. My coach has really helped me to develop those two areas, and I’m really happy with the overall progress.”

UCSB men’s tennis head coach Marty Davis says that not only has Moreno de Alboran’s success this fall helped get the UCSB program some national attention, including being part of the ESPN3 and ESPNU broadcast of the 2018 Oracle ITA Masters men’s singles final, but the senior’s success is having a positive effect on the rest of the team as well.

“It lifts everybody’s spirits,” said Davis. “Nic’s one of our co-captains and his improvement has been so steady over the four years. He’s really bought in to what we do, coaching-wise and as a program, and I think that’s influencing the other guys on the team to listen to the coaches, because it’s worked for him.”

As Moreno de Alboran continues to put in work on the practice courts, Davis sees more parts of his player’s game improve.

“We think he has the best forehand in the country,” said Davis. “His serve is improving every week, which enables him to hit more forehands. His ability to attack the net has grown leaps and bounds and just this week, his backhand and backhand return. It’s all centered around a massive forehand, but the rest of his game is starting to fill in the gaps.”

The recent on-court results have strengthened Moreno de Alboran’s confidence in his game as he prepares for a professional career once his collegiate days are over.