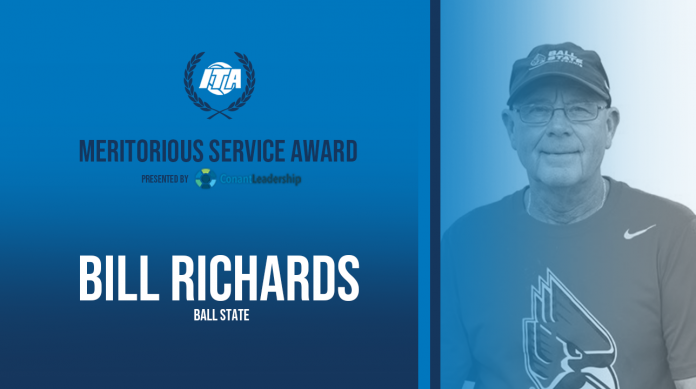 TEMPE, Ariz. – Bill Richards, the head men’s tennis coach at Ball State University, has been selected as the 2018 recipient of the ITA Meritorious Service Award, presented by ConantLeadership. Richards will be presented with the award on Saturday, December 15th, during the 2018 ITA Coaches Convention Awards Luncheon at the Naples Grande Beach Resort in Naples, Florida.

The ITA Meritorious Service Award is given annually in recognition of an ITA coach who has gone “above and beyond” in their commitment and contributions to the ITA and college tennis in general. As part of receiving the Meritorious Service Award, Richards, courtesy of the ITA and ConantLeadership, will attend the 2019 Enshrinement Weekend in Newport, Rhode Island, where Richards will be recognized during the International Tennis Hall of Fame Induction Weekend.

“On behalf of the Intercollegiate Tennis Association, we are honored to recognize one of our sport’s top coaches in Bill Richards with the 2018 ITA Meritorious Service Award, presented by ConantLeadership,” said ITA Chief Executive Officer Timothy Russell. “Our Association has been greatly enhanced by Coach Richards’s presence over the years as Chair of the Rules Committee, along with his service on the ITA Board of Directors and Division I Operating Committee. With close to 700 career wins under his belt, Richards has guided his Ball State teams to tremendous success on the tennis courts. The ITA thanks Bill for his leadership and service. We would also like to thank ConantLeadership for its support of college tennis and presenting Bill with such a prestigious honor, the ITA Meritorious Service Award.”

The winningest men’s tennis coach in Ball State and Mid-American Conference history, Richards has amassed a 685-415 (.622 winning percentage) overall record and a 215-59 (.784) Conference record his career. He’s coached 17 teams to undefeated regular seasons and 21 MAC Championships, with the first Conference title coming in 1984. Richards has garnered MAC Coach of the Year accolades 15 times. He received the 2014-15 NCAA Bob Frederick Sportsmanship Award and was the first coach in Ball State history to receive the President’s Medal of Distinction, which was presented to him at the 2012 Ball State commencement.

Richards was inducted into the Ball State Athletics Hall of Fame in 1993 and the Sturgis High School Hall of Fame in 2014. He was awarded the Benny Award from Ball State in 2006, which is the top honor for service to Ball State. Richards has conducted numerous clinics, including at the Midwest Open. He tutored former players Dan Kronauge and Paul Kruse to the 1991 Volvo Collegiate Fall Championship, which earned the duo the national No. 1 ranking, a spot they held for most of the season.

“It’s hard to find words to express my appreciation for this great honor. I’m completely overwhelmed and surprised,” said Richards. “It has been a great experience working with so many coaches and the ITA staff through the years. It has been a collaborative effort to continue to grow college tennis and make it the best it can be for the student-athletes, fans and coaches. I have such great respect and admiration for so many coaches that have contributed so much that it makes this award even more special. My sincere thanks to the ITA, not only for this award but for allowing me the opportunity to serve.”

A native of Sturgis, Michigan, Richards earned a Bachelor of Science degree from Western Michigan University in 1970 and a Master’s in Health and Physical Education from Bowling Green University in 1971. At Western Michigan, Richards was a three-year letter winner in tennis and a MAC Champion in singles and doubles. After serving as a graduate assistant at Bowling Green, Richards served as the head tennis coach at Portage Central High School for one year, prior to his appointment at Ball State.

Richards and his wife, Sue, have two children, Rob (wife Wendy) and Kristi, and two grandchildren, Leah and Ryan.

About The ITA
The Intercollegiate Tennis Association (ITA) is committed to serving college tennis and returning the leaders of tomorrow. As the governing body of college tennis, the ITA oversees men’s and women’s varsity tennis at NCAA Divisions I, II and III, NAIA and Junior/Community College divisions. The ITA administers a comprehensive awards and rankings program for men’s and women’s varsity players, coaches and teams in all divisions, providing recognition for their accomplishments on and off the court. For more information on the ITA, visit the ITA website at www.itatennis.com, like the ITA on Facebook or follow @ITA_Tennis on Twitter and Instagram.