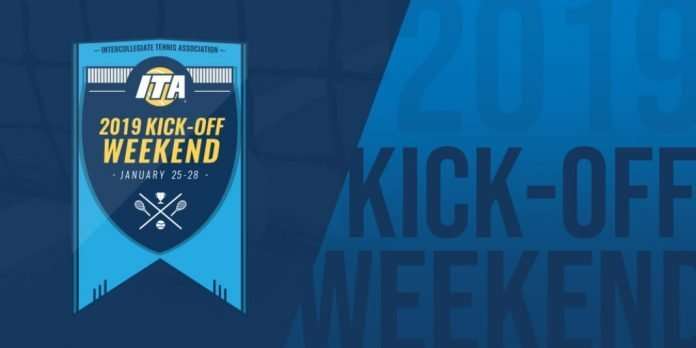 TEMPE, Ariz. – The 11th annual Intercollegiate Tennis Association Kick-Off Weekend takes place on January 25-28, 2019, at 24 different Division I tennis facilities across the country. In all, there are 60 teams competing per gender in ITA Kick-Off Weekend events.

There are 15 regionals played on both the men’s and women’s sides, with four teams competing in each regional. The winners of the single-elimination event advance to next month’s ITA Division I National Team Indoor Championships. Washington (women’s) and Illinois (men’s) will serve as hosts for the National Team Indoors and received automatic invitations to the event and are exempt from competing in the Kick-Off Weekend.

Host sites for the ITA Kick-Off Weekend were determined using the final 2017-18 Oracle/ITA Collegiate Tennis Rankings. A draft was held to fill the No.’s 2-4 seeds at all locations, again using the final national team rankings as a guide to determine draft order.

Opening round contests at each location pit the No. 1 host seed versus the No. 4 seed, and the No. 2 seed against the No. 3 seed. The two winners advance to the following day’s championship match, while the two losing teams will square off in a consolation match.

To view Kick-Off Weekend matchups for both men and women, visit the official event page. The results for each regional site will be updated throughout the weekend.