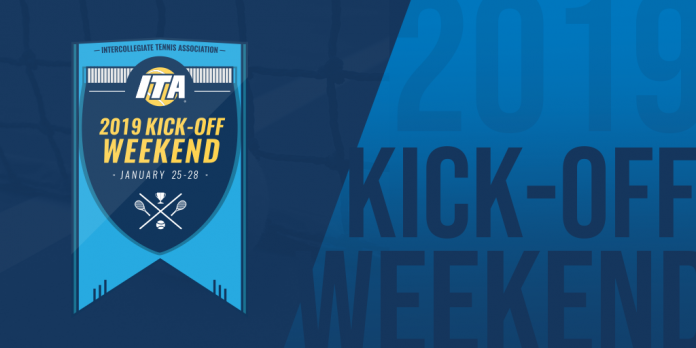 TEMPE, Ariz. – The fields to the 2019 ITA Indoor National Championships have officially been set as 30 of the best men’s and women’s programs from across the nation punched their tickets to the ITA Division I National Team Indoor Championships during the ITA Kickoff Weekend.

The University of Washington is set to host the women’s championship, Feb. 8-11. As host, Washington earned an automatic bid and was the first of the 16 teams to lock up a place in the bracket.

The 15 advancing men’s programs will converge on the shores of Lake Michigan where the University of Illinois will host at the Midtown Athletic Club in Chicago.

Nine of the top-10 men’s squads in the Oracle/ITA Rankings will make the trip to the Windy City after breezing through the regional rounds.

BYU and Memphis faced the arduous task of taking down reigning Indoor and NCAA champion Wake Forest in Winston-Salem, North Carolina, but the top-ranked Demon Deacons prevailed, sweeping the Cougars and dropping just one point to the Tigers on their way to another ITA Indoor National Championship appearance.

No. 2 Ohio State, No. 3 Mississippi State, No. 4 Florida and No. 5 Southern California hosted and had near-perfect weekends in route to a championship bid. Sixth-ranked North Carolina, No. 7 UCLA, No. 8 Texas and 10th-ranked Stanford also advanced to the championship out of their respective regionals.

Virginia was the only team to stifle a top-10 program at home during the weekend as the 16th-ranked Cavalier men held off Texas A&M to win 4-3 and prevent the ninth-ranked Aggies from taking a shot at the indoor crown.

Of the 15 men’s teams to advance to next month’s main event, 14 were ranked in the Oracle/ITA Top-25. Tulane opened the weekend with an upset of No. 18 Tennessee in the Tallahassee, Florida, regional. The Green Wave went on to topple the previously unbeaten Seminoles 4-2 to advance to the Championship.

The ACC will be well-represented next month as Wake, UNC, Virginia and No. 17 Notre Dame all earned berths in the round of 16. No. 22 TCU held off the Pokes of Oklahoma State to join Texas and No. 11 Baylor as the Big 12’s representatives. The SEC sends Florida and Mississippi State to Chicago, while UCLA, USC and Stanford come from Pac-12 country to the Midwest.

Ohio State and host Illinois come from the Big Ten, the Ivy League sends No. 14 Columbia and Tulane is the AAC’s sole entrant.

Just like the men’s Kickoff Weekend, the women’s edition saw nine of the top-10 ranked programs advance to Seattle, including No. 1 Stanford, No. 2 Vanderbilt, third-ranked North Carolina, No. 4 Duke, fifth-ranked Georgia, sixth-ranked Texas, No. 7 Pepperdine and Nos. 8 and 10 UCLA and Oklahoma State, respectively.

The ninth-ranked team, this time the women of Michigan, couldn’t make it out of the Oxford, Mississippi, region, which was eventually won by No. 24 Syracuse.

Defending NCAA champion Stanford cruised to the round of 16 with two sweeps of Saint Mary’s and Pac-12 rival Washington State. Several other teams also swept their way to Seattle, including the Longhorns of Texas, the Georgia Bulldogs, UCLA Bruins, Pepperdine Waves and Tobacco Road rivals Duke and UNC.

Eleven host teams advanced out of their respective regional, and three unranked teams ended the weekend on top.

Ohio State was the fourth seed in Atlanta and had to take on No. 13 Georgia Tech in the opening round. The Buckeyes blanked the Yellow Jackets, putting themselves into the regional final where they upended No. 25 Kentucky, 4-1.

Down in Tallahassee, LSU took care of Clemson in the first round while Tennessee unseated No. 15 Florida State to make it an All-SEC final in ACC country. In a battle of unranked foes, the Tigers came out victorious and punched their tickets to Seattle.

Just east of the Floridian capital in Gainesville, another four-seed in North Carolina State fended off a comeback effort from No. 11 Florida to secure a place in the bracket Monday afternoon.

There will be a plethora of East Coast teams heading out West as four SEC and four ACC teams make the trip to the Evergreen State.

A trio of North Carolina’s best – UNC, Duke and NC State – as well as Syracuse will represent the ACC, while Vandy, Georgia, No. 14 South Carolina and LSU come from the SEC.

Joining Washington from the Pac-12 will be top-ranked Stanford and UCLA.

Coming over from the Big 12 are the Cowgirls of Oklahoma State and the Texas Longhorns, while Northwestern and Ohio State come from the Big Ten. Pepperdine will head up the Pacific coast to Seattle as the WCC’s lone representative.

The Women’s ITA Indoor National Championship is scheduled to begin in Seattle Feb. 8 and will run until a champion is crowned on the Feb. 11. The men’s event in Chicago will follow on Feb. 13, with the final set to be played on the Feb. 15.

Taking #OUrStrongest on the road for #ITAKickoff. #Sooners head to Nashville and will open the tournament Friday with Winthrop!