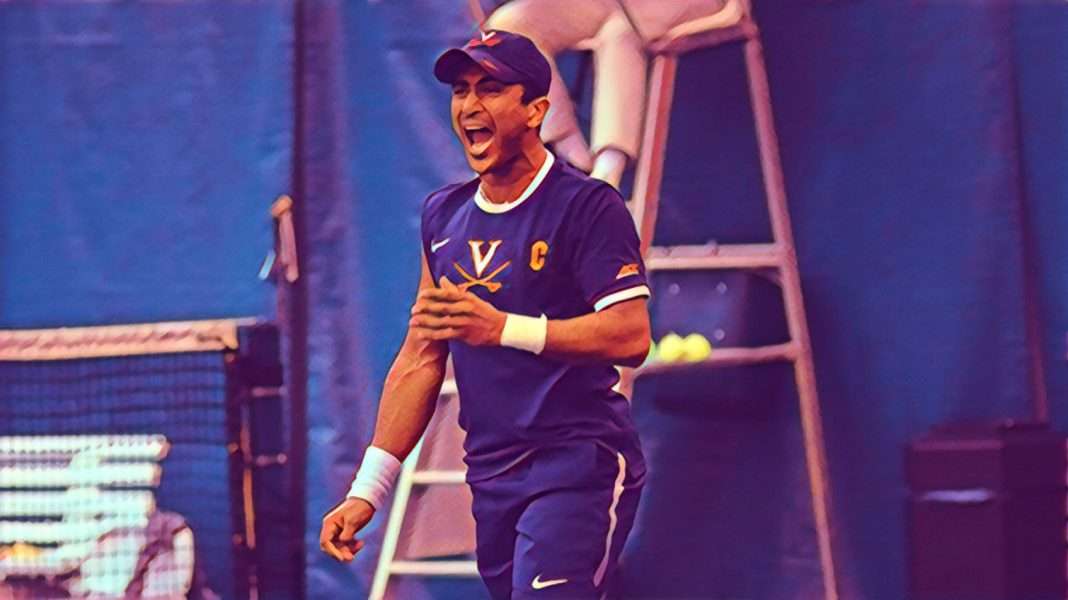 This week brought us some more 4-3 nail-bitters and thrilling upsets as top teams prepare for the ITA Indoors next weekend. Let’s waste no time and recap the top matches from the week.

The Fighting Illini remained undefeated and took down a hot Notre Dame team with a gritty effort in a mid-week battle.

The CLOSER or the CLINCHER?? 🤔

Junior @kova_aleks sealed the deal as the No. 14 #ILLINI topped No. 11 Notre Dame, 4-3!#businesstrip 🔶🔷 pic.twitter.com/ogAkUeGfPC

The UNC Tar Heels went into a hostile environment on Saturday night and defeated the host Illini to give them their first loss of the year in nail-biting fashion.

Josh Peck (36th ranked) then picked up a win over Zeke Clark (30th ranked) on court 3 and Blaine Boyden downed Siphosothando Montsi in straight-sets on court 6.

In a battle between two ACC foes, the Virginia Cavaliers topped the defending national champs with a 5-2 win on Friday night in Charlottesville.

Coming straight from the Dallas Challenger, Wake’s Borna Gojo made his spring dual match debut and teamed up with Alan Gadjiev at line 1 dubs to clinch the doubles point 6-4 over Carl Soderlund and William Woodall.

With the last two matches locked in third sets, Aswin Lizen clinched the match for UVA by defeating Julian Zlobinsky 4-6, 6-4, 6-4 on court 6.

The Stanford Cardinal also pulled a “non-conference” upset against a conference-rival on Friday night as they took down the Trojans in LA by a score of 4-3.

With the remaining matches in 3rd sets, William Genesen (33rd ranked) came from behind to beat Riley Smith 3-6, 6-4, 6-2 and Sameer Kumar (43rd ranked) followed in similar fashion by downing Mor Bullis on court 5 to clinch.

The weekend did not get any better for the USC Trojans as the unranked California Golden Bears came in for another 4-3 upset on Saturday.

The Bears won a close doubles point clinched by a rather fortunate shank volley from Can Kaya at 6-5 in the tiebreaker on court 2 to clinch the doubles point with Paul Barretto 7-6(5) over Jack Jaede and Laurens Verboven.

USC then came out firing in singles to go up 3-1 with straight set wins by Brandon Holt (56th ranked) over Jacob Brumm on court 1, Daniel Cukierman (4th ranked) over Paul Barretto on court 2, and Jake Sands over Bjorn Hoffman on court 5.

The match came down to court 4, where Cal Sophomore Jack Molloy had 3 match points in the 2nd set but could not convert. Molloy eventually prevailed 7-6(3), 6-7(6), 6-3 to seal the big win for the Bears.

The Mississippi State Bulldogs prevailed over the Tulane Green Wave 4-1 on Saturday in an extremely close match.

FINAL | The Dawgs get it done after dark, taking a 4-1 win against No. 19 Tulane indoors in Lubbock!

The Ohio State Buckeyes continued their relentless play on their home courts and downed the visiting Bulldogs in routine fashion.

Ohio State was up a set and a break on all the remaining matches that went unfinished.

The Florida Gators went into Fort Worth and pulled out a gritty 4-3 victory on Sunday.

TCU only has five indoor courts so the line 6 match between Lukas Grief and Sander Jong started mid way through the singles battle and Grief prevailed 6-4, 6-2 to keep Florida undefeated.

That wraps it up for this week. To read more updates from Cracked Racquets, head over to www.crackedracquets.com.