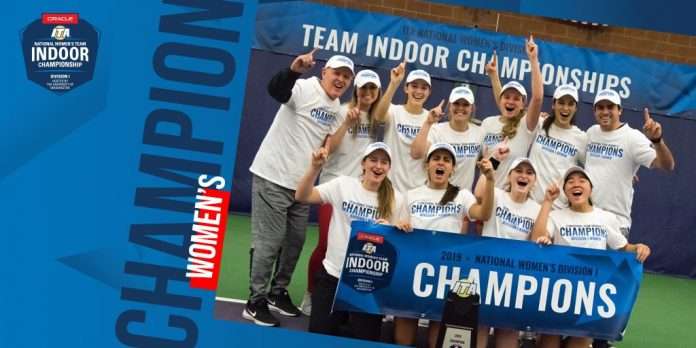 SEATTLE – In a thrilling championship match that came down to a third-set tiebreak on court one, the No. 5 Georgia Bulldogs out-dueled defending indoor champion No. 2 North Carolina to take the Division I ITA Indoor Nationals crown, 4-3, Tuesday in Seattle.

“When we got here, we were really excited to play and we felt we were ready for every match,” Georgia sophomore Katarina Jokic said. “We just played for each other and it makes it easier to play when you know your team is playing for the same thing.”

While both teams entered the title match on a hot-streak, both upending three ranked squads en route to the final, the fifth-ranked Dogs had to take care of No. 14 NC State, No. 4 Vanderbilt and No. 1 Stanford before they could get a shot at the championship.

“There’s that old saying, ‘you’ve got to weather the storm,’ and this team weathered a lot of storms outside and inside on the courts against four really great opponents,” Georgia coach Jeff Wallace said. “When you win 4-3, 4-3, 4-3, you know you’re being tested and taken right to the limit, but there was no quit in this team.”

The Tar Heels opened the tournament by blanking Oklahoma State, then running through No. 7 UCLA 4-1 before shutting out Tobacco Road rival Duke 4-0 in the semifinal.

In Tuesday’s final, North Carolina got off to another quick start by wrapping up the doubles point with two lopsided wins on courts one and two. The Bulldogs got one win from Kowalski/Jokic on court three, but the Tar Heels pairings were too much.

With a 1-0 lead heading into singles play, both teams sent five women ranked in the ITA singles top-125 to the courts with four courts sporting a clash between ranked women.

The only unranked Bulldog in the lineup Tuesday was the one who tied the match up at one apiece as Elena Christofi handled No. 104 Anna Sanford in straight sets, 6-2, 6-2.

Georgia would go on to take the lead with Meg Kowalski’s 6-2, 7-6(3) win on court six, but No. 7 Alexa Graham would even things back up with her three-set victory on court three. Graham breezed through the first set against No. 102 Lourdes Carle, but the UGA frosh battled to a 7-5 second set win to force a third that Graham would go on to win 6-2.

Georgia’s Vivian Wolff got the upset on court four to take the lead back. The 58th-ranked woman lost her first set to No. 20 Cameron Morra, but recovered to take the second set 6-3 before dominating the third set to earn another point.

The indoor crown came down to the marquee matchup on court one between UNC’s No. 6 Makenna Jones and No. 2 Jokic of Georgia.

“Seeing them on one side of the court cheering for me and knowing how bad they wanted me to win, it helped me compete even though I was really tired,” Jokic said. “I was ready for that tiebreak. I wanted it so bad and I wanted to play for the championship.”

Jones grabbed the early advantage in a 7-6(3) first set, but Jokic took the second set 7-5 to force a winner-take-all third set for the ITA Indoor title. Neither woman gave an inch and the two were knotted at 6-6 with everything on the line. Jokic would go on to roll in the tiebreak set to win the match and give Georgia its sixth national championship in school history.

“Everyone did a great job of supporting each other today and that’s what it takes to win a championship,” Wallace said. “You’re going to find yourself in some adverse situations and it takes resilience. We showed that we’re always ready and willing to compete.”

With the conclusion of the DI Women’s ITA Indoor National Championship, 16 of the best men’s programs prepare to battle it out in Chicago for the 2019 championships Feb. 15-18.

Katarina Jokic has been named Most Outstanding Player following her dauntless unbeaten run at #ITAIndoors pic.twitter.com/itPOjvgyCF