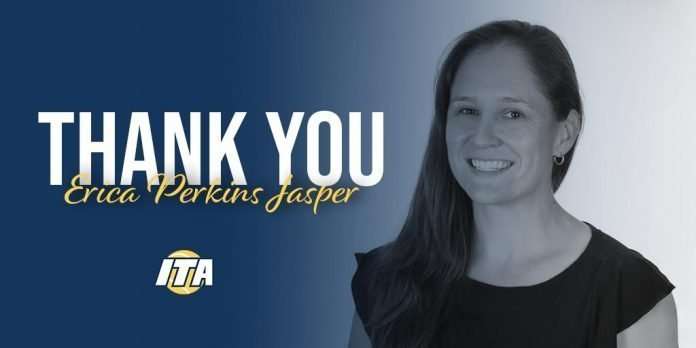 Jasper has served as the chief operating officer at college tennis’ governing body since 2015. She also spent nine seasons coaching at the NCAA Division I level that included head coaching tenures at Georgia Southern University (2002-04), Michigan State University (2006-08) and the University of New Mexico (2012-15), and as an assistant coach at College of William & Mary (2004-06).

Jasper will oversee the intercollegiate, club and recreational, and physical education programs of CMS Athletics that provides high-quality opportunities for students from the three CMS institutions (Claremont McKenna, Harvey Mudd, and Scripps Colleges).

“CMS student-athletes represent everything right about college athletics. They are high-achieving in the classroom and competitive on their respective fields of play,” Jasper said. “They have strong relationships with their peers and faculty, are leaders in campus organizations, and passionate about making an impact.”

In addition to her experience as a head coach and leadership role with the ITA, Jasper spent four years working for the United States Tennis Association’s (USTA) College Tennis Programming where she assumed the title of senior manager of junior and collegiate competition.

As the chief operating officer at the ITA, the official governing body of college tennis, Jasper oversees men’s and women’s tennis at all levels: NCAA Division I, Division II, and Division III, as well as NAIA, and junior colleges and community colleges. Working with 1,700 teams, she has formed close relationships with coaches, athletic directors, and student-athletes across the nation.

Harvey Mudd College President Maria Klawe said she was “particularly impressed with Erica’s background in leading complex organizations. We look forward to her joining us so that we can continue to improve our students’ experiences in athletics.”

Jasper, said Scripps College President Lara Tiedens, “brings tremendous experience as a leader, team builder, and competitor,” and praised “her understanding of the important role sports can play in enhancing a liberal arts education and her commitment to developing well-rounded student-athletes who will succeed on the field and in the classroom.”

Prior to joining the ITA in 2015, Jasper was the head women’s tennis coach at the University of New Mexico. She inherited a team that won only 17 matches in the prior three seasons and coached the Lobos to a Mountain West Conference title in her third year. Jasper’s teams also excelled in the classroom as the earned multiple academic awards.

Jasper was selected to lead CMS Athletics following a national search that included participation from coaches, CMS staff, faculty, students, and staff from all three institutions.

CMC Vice President for Student Affairs Sharon K. Basso, chaired the search committee, and said that out of the large pool of applicants, Jasper stood out because “she understands the powerful modality that college athletics provides for students to learn teamwork, leadership, perseverance, humility, and other critical skills for success in college and beyond.”

As a student-athlete, Jasper was team captain at Washington State University, where she was an Academic All-American and received the PAC-10 conference medal. She was the first WSU player to compete in the NCAA singles championship (three times), and also competed for the NCAA doubles championship.

Jasper will start on June 1. She replaces Terrance Tumey, who was named Director of Athletics at Fresno State University.

Members of the search committee were: