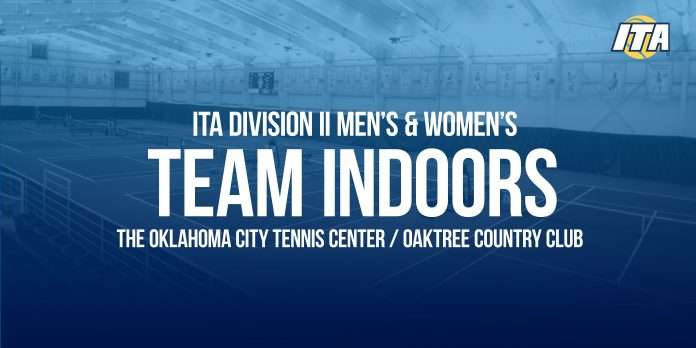 TEMPE, Ariz. (May 9) – The Intercollegiate Tennis Association (ITA) announced on Thursday that Midwestern State University and the University of Central Oklahoma will serve as host institutions for the inaugural ITA Division II Men’s and Women’s National Team Indoor Championships in 2020.

The two championships will run in conjunction with each other and are scheduled for Feb. 28 – March 1. The men’s championship will be contested at The Oklahoma City Tennis Center, while the women will compete at Oaktree Country Club in Edmond, Okla.

Dr. Timothy Russell, the ITA’s Chief Executive Officer, said, “Our Association is committed to serving all of college tennis and we are very excited to be adding these two DII national championships to the calendar, joining the long-standing prestigious sister events in DI and DIII.

“We believe that the ITA team indoor championships are some of the best and most unique events in all of college sports,” Russell added.  “And, aside from the top professional tennis tournaments in the United States like the US Open and the BNP Paribas Open, these events that feature the best college dual matches are a top American tennis product.”

The tournament field for each gender will be comprised of eight teams – the host institution team and seven teams selected according to the final Oracle ITA National Team rankings from the previous season.

All eight participating teams will be guaranteed three dual matches over three days. The format calls for three doubles matches followed by six singles matches and all dual matches will be played to clinch (first team to reach four points wins).

“I am excited to hear the news that we are expanding the event to (NCAA) DII tennis,” Central Oklahoma women’s head coach Jaron Maestas said. “With all the scares in program cuts, I think the more we can bring to light that small college tennis holds importance to student-athletes as well as communities the better.

“I am excited not as a coach but as a fan of the sport of tennis. Not every kid will play in front of 5,000 fans but if they have a platform to take pride in, it will make them feel like they are,” Maestas added. “This is 100 percent for the student-athletes and that is why I am in this industry.”

Midwestern State and Central Oklahoma have agreed to host the championships in consecutive years, and the 2021 events are scheduled for Feb. 26-28, 2021.

“We are extremely honored that Midwestern State University (MSU-Texas) has an opportunity to host the first Division II Men’s National Indoor Championship,” MSU-Texas head coach Scott Linn said. “I really appreciate all the hard work that Jaron Maestas at the University of Central Oklahoma has put into making both a Men’s and Women’s National Indoor Championship a reality for Division II student-athletes.

“Oklahoma City will be a great host site for both these events,” Linn added. “We want to thank the ITA as well for allowing us the opportunity to showcase these fantastic student-athletes and tennis programs from around the country.”