COLUMBIA, S.C.- Less than a month after winning the NCAA Singles Championship, South Carolina rising senior Paul Jubb will get the chance to play on tennis’ biggest stage, earning a wild card entry to the 2019 Wimbledon Championships.

A Hull, England, native, Jubb was awarded the third men’s wild card entry by the All England Club for this year’s tournament. The entry comes after Jubb notched back-to-back wins over ATP Top 160 opponents in the Ilkley Trophy ATP Challenger event. He is currently ranked 579 in the ATP rankings and has a Universal Tennis Rating of 14.45.

Jubb will become the second Gamecock to play in a Grand Slam event, following Stephane Simian who played in all four Grand Slams in 1994. Only one wild card entry has ever won Wimbledon, Goran Ivaniševi in 2001.

The tournament begins July 1 and will conclude July 14. 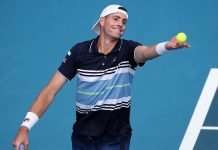