TEMPE, Ariz. (July 9) – The ITA began releasing its Top 10 Moments of the 2018-2019 season on Tuesday.  A new moment will be released every Tuesday until the top moment is announced on September 10th.

About the Intercollegiate Tennis Association
The Intercollegiate Tennis Association (ITA) is committed to serving college tennis and returning the leaders of tomorrow. As the governing body of college tennis, the ITA oversees men’s and women’s varsity tennis at NCAA Divisions I, II and III, NAIA and Junior/Community College divisions. The ITA administers a comprehensive awards and rankings program for men’s and women’s varsity players, coaches and teams in all divisions, providing recognition for their accomplishments on and off the court. For more information on the ITA, visit the ITA website at www.itatennis.com, like the ITA on Facebook or follow@ITA_Tennis on Twitter and Instagram. 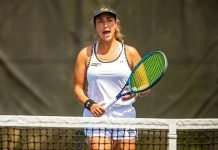 TopCourt Becomes the Official E-Learning Platform of the ITA