It’s scary to think that come this spring, Georgia Gwinnett College could field its strongest men’s and women’s tennis teams in the short eight-year athletic history of the NAIA school located in Lawrenceville, Ga.

The men’s and women’s programs head coach Chase Hodges and his assistant Hannah Keeling each made that statement in separate interviews a day after two GGC men’s and women’s singles players and two doubles teams advanced to the finals of their respective draws at last week’s ITA Cup played in Rome, Ga.

“I honestly feel that we will have our strongest teams in 2020,” said Hodges, who has been the only head coach the program has ever known, dating back to July of 2012. “Our team is stacking up to being very good and we return a good core of our men’s team.”

Added Keeling, who joined the program as an assistant in February of 2018: “I think we could have one of the strongest men’s and women’s team we’ve ever had.”

That’s just terrible news for all the other NAIA schools who find Georgia Gwinnett – which opened in 2006 and is currently home to more than 13,000 students – on their dual-match schedule for the 2020 season. There’s no overstating the facts: The Georgia Gwinnett men’s and women’s teams are two of the most dominant programs in any sport on any level.

The youthful-looking Hodges served previously as a head coach at Division I programs UNC-Asheville (2003-05), Drake (2006-09) and Georgia State (2010-12) before finding a home at Georgia Gwinnett. “It’s not often you get to start a program from scratch,” said Hodges, who was featured in Sports Illustrated’s iconic Faces In the Crowd section a few months back.

Hodges is content at GGC, and not looking for a bigger opportunity with a top Division I program. “I’m happy where we are at and it’s not like I have never had the chance to coach at the D-1 level,” he said.

Hodges explained that recruiting has become easier with all the winning. “Players want to be part of a winning tradition,” he said. “It’s just required the right players and the right fit. We recruit not based on potential but where they are right now. Once you obtain success, it becomes easier and you’re not having to sell your program.”

The Georgia Gwinnett men’s team is led by ITA Cup singles winner Jose Dugo, a sophomore from Cordoba, Spain, who played No. 4 singles for the Grizzlies last season. Senior Federico Herrera Duran from Rosario, Argentina, finished last season as the No. 1-ranked player in the final ITA singles rankings while junior Federico Bonacia from Rome, Italy, accomplished the same feat in doubles.

On the women’s side, Maria Genovese has fit right in after transferring from Tyler Community College and had a nice run to the ITF Oracle Cup singles and doubles final with partner Madeline Bosnjak. Like Herrera Duran, Bosnjak is returning after finishing tops in the women’s singles and doubles rankings with Emerald Able, who has decided to sit out the fall season but will return in the spring.

Hodges said one big change this year is that NAIA is adopting the same scoring as NCAA with the doubles counting for just one point, instead of one point for each win for a possible total of three points.

Hodges and Keeling are assisted by Robert McAdoo and Pete Greteman. McAdoo served as Hodges’s assistant to the men’s team when he was at UNC-Asheville. McAdoo’s sister Rasheeda starred for Georgia Tech and his father Bob is a college basketball and NBA Hall of Famer.

Originally from England, Keeling is a former NCAA Division II top-20 singles player from Clayton State University in Morrow, Ga. She graduated in 2015 and previously worked at the Robby Ginepri Academy in Atlanta.

“Working with the men has been pretty special,” said Keeling, who has already won four national titles in two seasons and hasn’t yet ended a season with a loss. “They are all at such a high level, and super respectful. Being an international player myself, I can relate to a lot of things the players are going through, both on the court and off.”

Keeling will be making her first-ever trip to California next month when she and Hodges bring Dugo to Newport Beach in Orange County for the culmination of the fall tennis season, the Oracle ITA National Fall Championships Nov. 6-10.

She’s enjoying her time at Georgia Gwinnett and continues to learn from one of the best coaches in the country in Hodges. “He always says I could get any job I want now with four national titles,” Keeling said. “It would have to be a special gig to leave. I really love it here.” 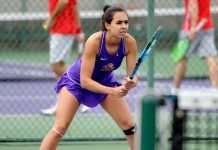