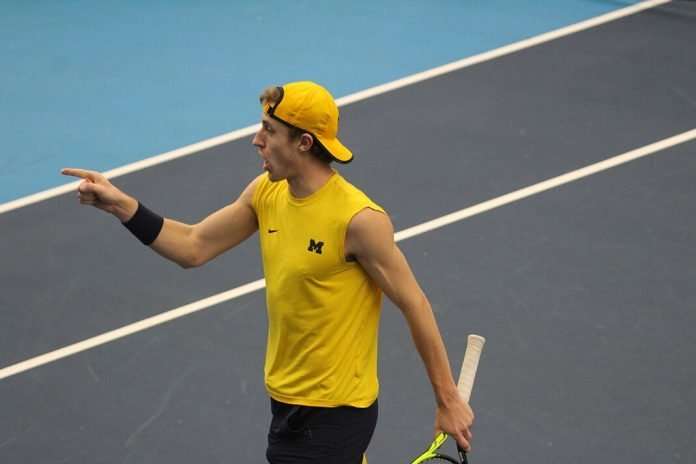 With the conclusion of the Intercollegiate Tennis Association’s Kickoff Weekend on Sunday, 15 teams punched their ticket to the 2020 Division I National Men’s Team Indoor Championship presented by Oracle in Madison, WI.

The national championship is hosted by the University of Wisconsin, the Badgers received an automatic bid as the host, and will run from February 14-17. The match play will take place at the Nielsen Tennis Stadium and is open to the public.

The top five teams in the Oracle ITA Division I team rankings are headed to Wisconsin—Texas, Florida, USC, North Carolina, and Baylor. North Carolina State upset the University of Virginia 4-1 to qualify for the national championship.

Texas swept No. 21 FSU, 4️⃣-0️⃣, to win the championship of the Austin @ITA_Tennis Kickoff Weekend on Sunday! The Longhorns advance to the ITA National Indoor Championships for the third-straight year!

FINAL FROM STARKVILLE | 🐓 4, 🐶 3
ALL HEART, NO QUIT @PaulJubb3 SEALS IT AND THE BOYS ARE OFF TO MADISON FOR ITA NATIONAL TEAM INDOOR CHAMPIONSHIPS!#Gamecocks #GamecockGRIT pic.twitter.com/d48VlHV6CN

Book that ticket to Wisconsin! The Trojans finish off a victorious #ITAKickoff for the 12th straight year!#FightOn ✌️ pic.twitter.com/B1fngwtWDX

Congrats to @PackMensTennis for booking a spot in the ITA National Team Indoor Championships for the first time in program history!

Closer than the score looked, but the end result is a trip to ITA National Team Indoors next month.#NextStartsNow #GoStanford https://t.co/sPMIb5JN74

We’re headed to #ITAIndoors for the third-straight year and fifth time in six seasons after Tang’s win at No. 2 singles clinched the 4-2 victory at No. 16 Tennessee!

The No. 2 Gators claim their fourth consecutive ITA Kickoff Championship with a 4-0 sweep over USF 🐊🏆

More on the ITA Kickoff Weekend.