The Tar Heels swept the UTR ITA Division I Player of the Week awards with William Blumberg claiming the men’s accolade and Alexa Graham the women’s. Blumberg went unbeaten over the weekend with two singles wins and one doubles win (one unfinished).

The senior started the weekend off by clinching the doubles point against No. 19 Illinois. He went onto defeat Aleks Kovacevic in straight sets (6-2, 6-2). Kovacevic was a 2019 NCAA singles semifinalist (UTR 14.22).

On Sunday, Blumberg downed reigning NCAA singles champion Paul Jubb (UTR 14.27) in an impressive 6-3, 6-4 match. Blumberg’s win was crucial in the Tar Heels 4-0 victory over the No. 12 Gamecocks.

UTR is the global gold standard for all tennis players, which reflects their current skill level based on actual performance and is used by college coaches for evaluating player ability, seeding, selection, and more. 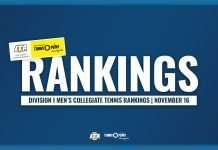