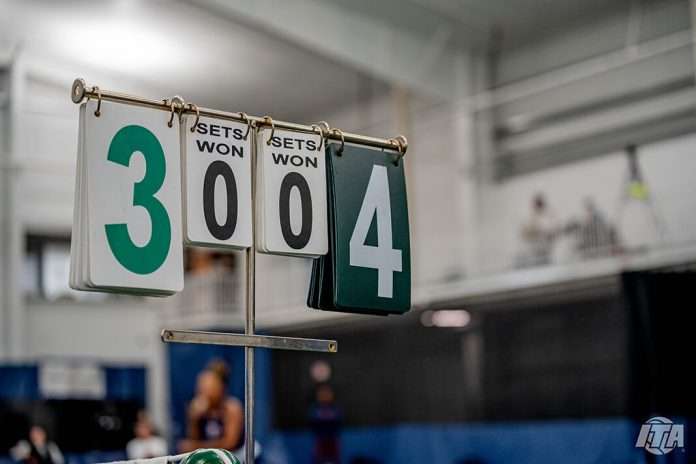 Day two at the 2020 ITA Division I National Women’s Team Indoor Championship Presented by Oracle results in a semi-final of two PAC 12 teams in the top half of the draw, and two ACC teams in the bottom half looking to square off for the opportunity to play for the championship on Monday.

The following matches took place during the second day of competition and are featured with Cracked Racquets play-by-play commentary on PlaySight’s new GO technology platform.

The early morning match-up of Princeton and Arizona State displayed the advantage of having indoor experience as Princeton took the match 4-0. Briana Shvets and Grayce Joyce both went 2-0 on the day winning their respective doubles and singles matches with no set getting closer than 6-3.

In our second match at the @ITA_Tennis National Indoor Championships, we defeat Arizona State 4-0! 🐯🎾 pic.twitter.com/bTL5tEoFwX

Virginia once again demonstrated their doubles prowess taking the doubles point for the second match in a row. However, the momentum would stop there as Pepperdine won four straight-set matches. In a match featuring the current No. 1 ranked singles player, Ashley Lahey of Pepperdine, and the player voted to the top of the 2019-2020 Freshmen/Newcomer rankings, Natasha Subhash, Lahey walked away with a 6-3, 6-3 victory.

Two teams battling for ACC dominance this year met in the quarterfinals with North Carolina walking away with the 4-1 decision. The strength of North Carolina’s top three singles lines was apparent as Alexa Graham, Sara Daavettila, and Cameron Morra each picked up top 50 wins against Alana Smith, Anna Rogers, and Adriana Reami, respectively.

Headed to the semifinals 💪 pic.twitter.com/2jjz4WgBcX

Duke junior Kelly Chen had quite the day as she defeated the reigning ITA National Player of the Year, Katarina Jokic, to knock off the reigning ITA National Indoors champion, Georgia. The doubles point and wins at No. 4 and No. 5 singles put Duke within one point of the clinch, where Chen came back from a set down to secure the spot in the semifinals with a 5-7, 6-4, 6-2 win.

Kelly Chen sends us to the SEMIS 😈

Death, taxes, and Stanford in the semifinals of a national championship. Stanford punched their ticket into the semifinals with a 4-1 win over unseeded Georgia Tech. After edging Georgia Tech in the doubles in a tiebreak, Stanford received straight-set wins from Sara Choy, Emma Higuchi, and Emily Arbuthnott. However, Kenya Jones of Georgia Tech would notch a point for the Yellow Jackets in a three-set win at the top of the lineup.

UCLA followed up a strong first-round win with an equally impressive 4-0 victory over Florida State in the quarterfinals. UCLA took five of six first sets, with courts No. 1, No. 2, and No. 6 reaching the finish line first. Through two full rounds, UCLA has only dropped two sets total.

In the first round of consolation, it looked like Texas would cruise as they picked up the doubles point and five quick first set wins to race out to 3-1 lead. However, the match got more complicated when Illinois made a push on the remaining three courts, splitting sets on No. 3 and No. 5 while going up 5-2 in the second set on court No. 4. Fernanda Labrana (Texas) provided some heroics, twice breaking Ashley Yeah (Illinois) as she served for the set, sending it to a tiebreak that Labrana ultimately won 7-4.

The Longhorns will conclude play at #ITAIndoors on Sunday at 6:30 pm CT against either #10 Michigan OR #12 Ohio State.#HookEm 🤘🎾 pic.twitter.com/hlDMEwX5kY

As one of the most fiercely contested rivalries in college sports, it was only right that Ohio State and Michigan went the distance. Chiara Lommer of Michigan saved match points to come back and claim a third set tiebreak to even the score at 3-3. A back-and-forth affair on court #6 finally ended when Bella Lorenzini of Michigan sent a volley long to give Luna Dormet and Ohio State the win.

Timothy Russell, the Chief Executive Officer of the Intercollegiate Tennis Association, is interviewed by Alex Gruskin, Editor-In-Chief of Cracked Racquets.

Powered by https://t.co/tX0JUrtAWK –
promo code CR50 for 50% off string, bags or racquets. pic.twitter.com/nb9hxtZ9QB

Matches will resume Sunday at 9 AM CST at the XS Tennis Village. Semifinals will be played at 12 PM CST and 3:30 PM CST.