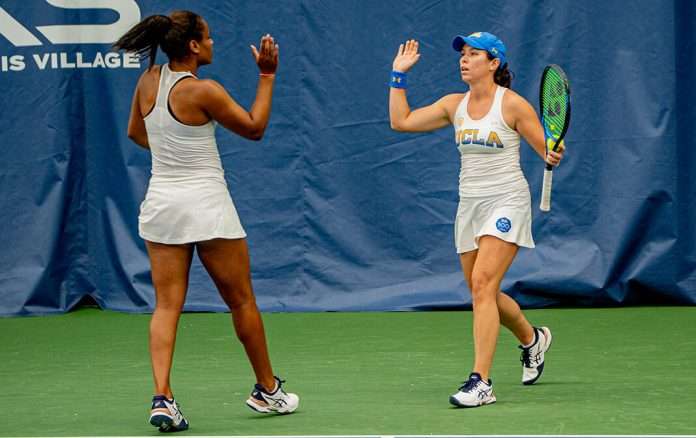 The ITA Division I National Women’s Team Indoor Championship is set after UNC and UCLA swiftly won their matches over their conference foes. The championship match will be played at 11 AM on Monday at XS Tennis Village.

The following matches took place during the third day of competition and are featured with Cracked Racquets play-by-play commentary on PlaySight’s new GO technology platform.

The ACC duel between Duke and North Carolina started strong with UNC taking the doubles point. Daavettila took control and quickly defeated Duke’s Mansouri (6-1, 6-1) followed by Sanford (6-3, 6-1) then Jones (6-4,6-3). Tomorrow will be the 6th straight year that the Tar Heels will have played in the championship. The last time that they won the title was in 2018 in a 4-2 victory over Pepperdine.

Make that 6⃣ straight appearances in the #ITAIndoors title match for the Tar Heels!!!!!!#GoHeels pic.twitter.com/vqjQwatAY8

An all Pac-12 match between UCLA and the reigning NCAA Champions didn’t end as expected. The Bruins dismantled the Cardinal in less than two hours. Hart/Bolton and Forbes/Goulak took the doubles point in 24 minutes. Hart recorded the first singles win (6-2, 6-1) and was followed quickly by Forbes (6-2, 6-0). Vagramov clinched the match for the third time this weekend sending UCLA to the championship. The last time UCLA hoisted the Indoors trophy was in 2012.

Florida State defeated Georgia Tech 4-2 in their final match of the championship. Georgia Tech got off to a quick start winning the doubles point, Flores/Jones (6-2) and Cohen/Otsuka (6-1). Florida State battled back to a victory behind wins from Das, Hill, Garcia, and Allen.

The Wolfpack handed Georgia their second loss of the weekend with a 4-1 victory. NC State took the doubles point with the help of Smith/Rogers and Daniel/Reami. Reami and Keberle both won their singles match. Georgia’s Coppoc won the only singles match for the Bulldogs. Alana Smith finished the match by defeating reigning ITA Division I Women’s Player of the Year, Katarina Jokic, 7-6 (5), 6-3.

Princeton took down six-seed Pepperdine 4-0. Shvets defeated No. 1 Lahey in straight sets (6-4, 6-4) helping the Tigers to their win. All three of Princeton’s singles wins came in straight sets.

Virginia came out strong in doubles and took wins on courts one and three to jump ahead to a 1-0 lead that Virginia would not give up for the remainder of the match. Virginia was able to outlast ASU, 4-3.

Texas defeats Ohio State in the consolation bracket. Despite the fact that the individual matches were all lopsided affairs, the team match went back and forth until Bianca Turati secured the win for the Longhorns with a 6-2,6-3 win over Shiori Fukuda.

Five of the six first sets went to five all, before Michigan closed out four of them and then ran away with the second sets to clinch the match. Rabinowitz won the sole point for Illinois with a 7-5, 6-0 victory over the Wolverines’ Cerdan.

Powered by https://t.co/tX0JUrtAWK –
promo code CR50 for 50% off string, bags or racquets. pic.twitter.com/juC6J9OjT7

Matches will resume Sunday at 9 AM CST at the XS Tennis Village. Semifinals will be played at 12 PM CST and 3:30 PM CST.