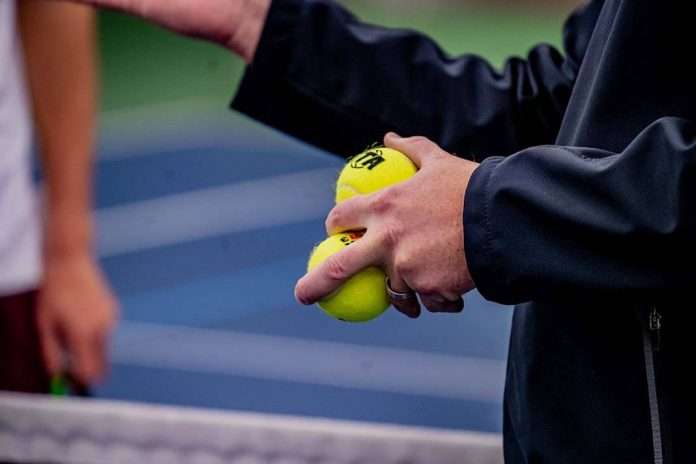 The first round of the ITA Division I National Men’s Team Indoor Championship saw stiff competition. All of the top eight seeds moved on with the exception of No. 6 Texas A&M and No. 8 Baylor.

The Bruins got out to a quick start against the Longhorns taking the doubles point 6-2 and 6-3. UCLA’s Drew Baird struck first in singles (6-2, 6-3) and put the Bruins up 2-0. Freshmen Harper and Spizzirri each won their matches to even the score. The Longhorns seemed to be on a roll, but UCLA didn’t go down without a fight. Keegan Smith pushed No. 2 Yuya Ito to a third set after a tiebreaker in the second (6-4, 6-7 (7), 6-2). After being pushed to a third set, Christian Sigsgaard clinched the match for Texas at singles No. 2. The senior won 6-4, 6-7 (7), 6-2. Texas will match up with Michigan tomorrow in the quarterfinals.

Michigan stunned No. 6 seeded Texas A&M 4-3. The match came down to the singles No. 2. After dropping the first set, Styler ground out wins in the last two sets – 6-4, 6-4. The Wolverines tallied other points from doubles (Fenty/Siimar, Brown/Beaty). Nick Beaty followed up his win in doubles with another against Stefan Storch (6-2, 6-3). Fenty brought the Wolverines within one point of victory with his 6-3, 6-2 win.

In another match that took all six singles to win, Stanford edged out NC State 4-3. The NC State duos of Babelis/Barkai and Galarneau/Turzak sealed the doubles point for the Wolfpack. However, it was not long before the Cardinal pulled even after Sridhar defeated Barkai 6-1, 6-4. Stanford surged ahead in the match fueled by victories from Rotsaert and Kolasinski. The Wolfpack answered back with points coming from courts one and four. The match was ultimately won by Rajesh, 6-4, 6-7 (1), 6-4.

The Horned Frogs jumped out to an early winning the doubles point against No. 1 USC. The Trojans came back in singles with victories from Dostanic and Bulis. Brandon Holt and Daniel Cukierman raced against each other to see who would clinch the win for the Trojans. Holt came from behind in the second set to force a tiebreaker. Meanwhile, Cukierman on the court next to Holt worked methodically in the third. No. 1 Cukierman proved to be too much for Fomba and won 7-5, 4-6, 6-1.

After a hard fought doubles point, the Florida Gators rolled to a 4-0 victory over No. 9 Columbia. Florida won off the strength of their top three singles – all of which were won in straight sets. No. 4 Sam Riffice easily defeated Columbia’s No. 2, Jackie Tang, to the tune of 6-3, 6-0. Next to finish for the Gators was Vale, 6-3, 6-1. Fighting off a late push from Jack Lin, No. 23 Crawford sealed the win 6-1, 6-4 on court one.

In a border battle, the north walked away with a win. The Tar Heels claimed the doubles point and another in singles off a Cernoch win. Thomas Brown and Connor Thomson put the Gamecocks on the board with their wins. Next, Blumberg took down defending NCAA singles champion, Paul Jubb, to tally the third point for the Heels. With the win within grasps, Carolina looked to Sigouin. He clinched the match 7-4 (4), 6-3.

Defending Indoor champions, Ohio State, easily took care of host Wisconsin. The doubles point came off of victories on courts one and two. In singles, Trotter (6-3, 6-1) and Boulais (6-3, 6-3) struck first. With courts one and six closing in on wins, freshman Cannon Kingsley sealed the win on court two. The UTR ITA Player of the Week defeated Gabriel Huber of Wisconsin 6-3, 6-4.

Wake Forest avenged last week’s loss to No. 12 Baylor in the opening round of the ITA DI National Men’s Indoor Championship. The Bears took the doubles point after a tiebreaker on court two. After doubles the Demon Deacons took control and won four straight singles points in straight sets. The most difficult point was the last. After going down 4-5 in the second, Botzer climbed his way back into the set tying it 5-5. He then went on to defeat Matias Soto 6-1, 7-5.