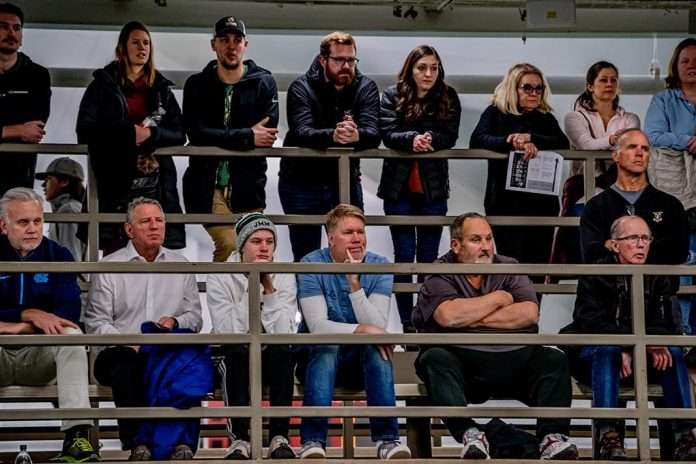 Semifinal Sunday was a tale of two different matches – one a comeback victory and the other a dominating win. The No. 2 seed, USC, will meet the No. 4 seed, UNC, on Monday at 12 PM CT in the championship match of the ITA DI National Men’s Indoor Championship.

No. 1 Southern California orchestrated a huge comeback to end underdog Michigan’s title hopes. Michigan went toe to toe with USC during the doubles point – it took a tiebreaker on court three from Brown and Maloney, 7-6 (4), for the Wolverines to tally the point. The Trojans snuck back into the match after Smith defeated Siimar, 6-3, 6-4. Tied at one-all, Michigan surged ahead and won on courts one and four. Poised to clinch the match on any of the remaining three courts, Michigan watched their lead slip away. Dostanic chipped away at the Wolverines lead with a 2-6, 6-4, 6-3 victory. Next, Jackson pulled the Trojans even. No. 1 Cukierman gritted out a three-set match and won on a tiebreak against freshman Wolverine Styler, 1-6, 7-5, 7-6 (2).

North Carolina did not allow the defending Indoor champions and No. 1 seed Ohio State to score a single point. After winning the doubles point, the Tar Heels started to roll through singles. Hijikata finished first – 6-2, 6-2. Soendergaard followed shortly after with an impressive 6-1, 6-2 victory. Cernoch sent the Heels to the finals after taking his match 6-4, 7-5. Coach Paul reached the 500 win mark with the semifinal win.

No. 15 seed TCU finished out Indoors with a top 10 win over No. 7 Texas A&M. The Horned Frogs did not drop a point to in-state rival A&M. Jong recorded his third straight win of the weekend defeating Marson 6-3, 6-2. Fomba finished with a ranked win over No. 34 Carlos Aguilar for point three. After dropping his first set, Fearnley rallied and clinched the match for TCU, 1-6, 6-2, 7-5.

Coach Martin notched his 600th career win after his Bruins took out NC State 4-0. UCLA received points from Tsolakyan, Nanda, and Goldberg in addition to the doubles point. NC State’s Galarneau was threatening on court one – 6-2, 6-6 – before the Bruins won the match. UCLA went 1-2 during Indoors.

The Longhorns ended the weekend on a high note with a ranked win over No. 8 Stanford. Senior Ito clinched the match for Texas winning 3-6, 7-5, 6-3 against No. 16 Geller. Ito fought back into the match after dropping the first set and going down 2-5 in the second. Texas also saw wins from Harper and Huang. Stanford’s two points were from No. 21 Rotsaert and Kolasinski.

The No. 3 Florida Gators closed out the weekend with a win over No. 6 Wake Forest. The sole point for the Demon Deacons came from doubles – Nava/Squire (7-5) and Botzer/Dill (7-5). In singles, Florida took the lead and never looked back. Wins came from Riffice, Vale, Goodger, and Greif.

Columbia edged out Baylor for the doubles point, 6-4 and 6-2. No. 25 Lah evened the score at one-all for the Bears beating Tang of Columbia. Columbia pulled ahead 2-1 off of an Ambrozy victory on court four. Huang piled on another point for the Lions making it 3-1. Baylor’s Bass followed shortly with his own victory to narrow the lead. No. 20 Lin downed No. 67 Soto to clinch the win for Columbia.

The Wisconsin Badgers took the doubles point – the first point they scored all weekend; however, it would be their last as well. Wisconsin took three of the first sets but failed to win a singles match. Paul Jubb blazed through his match with Chase Colton, 6-1, 6-0. Lambling took his match with Huber 6-3, 6-4. After dropping the first set, Rodrigues won 3-6, 6-2, 6-2 to put the Gamecocks within one point of victory. Brown sealed the match with a 6-2, 6-7 (6), 6-2 victory.