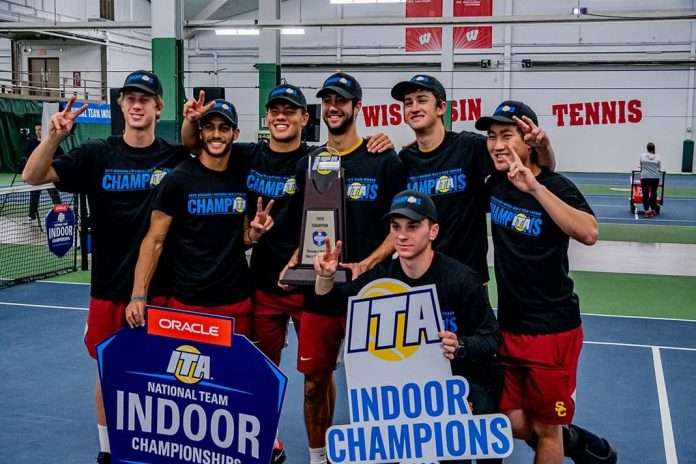 Play began at noon at Nielsen Tennis Stadium and by 2 PM Masi and his team were national champions. The clinching point came from sophomore Mor Bulis on court four. Bulis took the first set 6-3 and then went up 5-0 in the second. Carolina’s Josh Peck dug his heels in and pushed the score to 5-1, but the lead was too large. On the deuce point, Peck’s serve went into the net and Bulis was enveloped by his teammates in a dog pile.

After splitting wins on court two and three, the doubles point would be decided at the top of the lineup. Blumberg and Cernoch jumped out to an early lead in the tiebreaker, 5-2, but could not hold off the American/Israeli duo of Smith and Cukierman. The Trojans took the point 7-6 (5) and 6-2.

UNC got on the board after Brandon Holt was forced to retire following a 6-0 set in favor of William Blumberg.

In straight sets, Cukierman defeated Sigouin 6-2, 6-1 and retook the lead for the Trojans. Cukierman went 4-0 in singles during Indoors. His wins include No. 16 Geller, No. 43 Styler, No. 60 Sigouin, and No. 125 Fomba. Cukierman and Smith also did not drop a doubles match.

Stefan Dostanic pulled the Trojans within one point of the championship after finishing off Brian Cernoch, 6-1, 6-4. Dostanic was also undefeated in singles on the weekend. He won three of his matches with one unfinished.

The Trojans reached the championship match after taking down TCU 4-2 in the first round, Stanford 4-0 in the quarterfinals, and Michigan 4-3 in the semifinals.

North Carolina and Southern California competed in the 45th year of the ITA Division I National Men’s Team Indoor Championship presented by Oracle. The championship returned to the University of Wisconsin after 40 years of it being held at other sites.