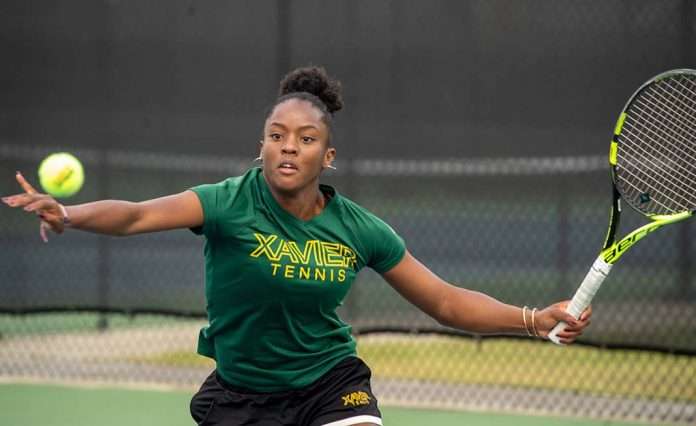 Texas A&M’s lone senior, Valentin Vacherot, was named the UTR ITA Division I Men’s Player of the Week. Vacherot notched two top 50 singles wins over the weekend along with a win in doubles. No. 3 Vacherot won out in a back-and-forth battle with defending NCAA champion Paul Jubb (No. 40) on Friday. Earlier in the dual match, Vacherot and Schachter downed South Carolina’s Thomson/Jordan. Vacherot capped off the weekend with a victory over Florida’s No. 10 Oliver Crawford. After a hard fought first set, 7-6 (0), Vacherot ran away with the second set, 6-1. The win was Vacherot’s 100th career victory.

Gamecock senior Mia Horvit helped her team to two straight SEC wins after defeating two ranked singles opponents. Horvit played at No. 1 singles against No. 36 Texas A&M and No. 25 LSU. She started the weekend with a straight set victory over No. 99 Tatiana Makarova, 7-5, 6-3. To finish the weekend, No. 39 Horvit defeated No. 36 Taylor Bridges of LSU. During doubles against the Tigers, Horvit and Davies blitzed No. 26 Geissler and Richardson for their highest ranked doubles win of the season.

Columbus State Cougar Javier Cueto Ramos claimed two ranked wins over the weekend. The freshman tallied two more singles wins to remain undefeated in singles play this spring. Cueto Ramos powered through a ranked match with Azusa Pacific’s No. 39 Nuno, 6-4, 6-4. Paired with Regalado, Cueto Ramos earned a 6-4 win over No. 12 Haas/Bohren. He won in doubles and singles against Montevallo to close out the weekend. Cueto Ramos moved up to No. 2 singles for the first time this season against the Falcons.

Candice Paya rolled on for the Cougars over the weekend. The junior from France went undefeated in doubles and singles through two dual matches with No. 13 Azusa Pacific and Montevallo. Paya flew through her match with No. 8 Anna Savchenko to record her highest ranked win of the season. Montevallo’s Ozzor met a similar fate falling to Paya in straight sets, 6-2, 6-1. In doubles, Paya and Lopez won two lopsided 6-2 matches.

Mary Washington’s Moses Hutchison shined this weekend for the Eagles. The junior orchaestrated a wildly impressive comeback win over Kenyon’s No. 6 Jake Zalenski, 3-6, 7-6, 10-4, to tally the lone singles point for the Eagles in the dual match. Hutchison’s win over Zalenski is his highest ranked win in his career. He also won his match against John Carrol’s Garcia in straight sets. In doubles play, Hutchison and Fleming were undefeated on the weekend.

Skidmore freshman Maya Lal completed an impressive comeback victory to tally a point in the Thoroughbred’s 7-2 dominance of No. 12 Williams College. Lal narrowly dropped the first set after it went to a tiebreaker, 6-7 (5). However, Lal turned on the burners after the first set and blazed through the next two against Orgielewicz. Lal’s victory – 6-7 (5), 6-1, 6-2 – was the clinching match in Skidmore’s upset of Williams College.

Harford Community College freshman Harry Collins shined for the Owls over the weekend. Collins went 2-0 in singles and 1-1 in doubles through Harford’s matchups with No. 3 Seward County and USC Sumter. Against USC Sumter’s Israel Rojas, Collins rolled to a quick 6-3, 6-1 victory. His doubles match against Lai Son/Paladines was much closer, but the Harford duo won out, 8-7. In the match against Seward County, Collins was responsible for the Fighting Owls’ lone point. The freshman recorded a major upset over No. 2 Sander Jans. Collins took the first set to only narrowly drop the second. He fought back and took the tiebreaker to win 6-3, 5-7, 10-5.

Luke Simkiss continued to dominate this week recording two ranked singles wins. In Keiser’s close 4-3 loss to Cardinal Strich, Simkiss blazed through his match with No. 27 Rossi, 6-2, 6-1. Playing at No. 2 doubles, Simkiss and Barrios finished first to help the Seahawks to the doubles point. Against Point, Simkiss and Barrios clinched the doubles point for Keiser. Simkiss then defeated No. 40 Klokow to tally a point for the Seahawks in their 6-1 victory.

For the second week in a row, the UTR ITA NAIA Women’s Player of the Week hails from Xavier University of Louisiana. Angela Charles-Alfred went 2-0 over the past week. Charles-Alfred set the pace for the Gold Nuggets’ 4-0 win over Tennessee Wesleyan – she finished first in both doubles and singles. Charles-Alfred and Bashir dominated Piquero/Cabezas Marti in a 6-1 victory. No. 11 Charles-Alfred also took down Piquero in straight sets in singles, 6-0, 6-2.