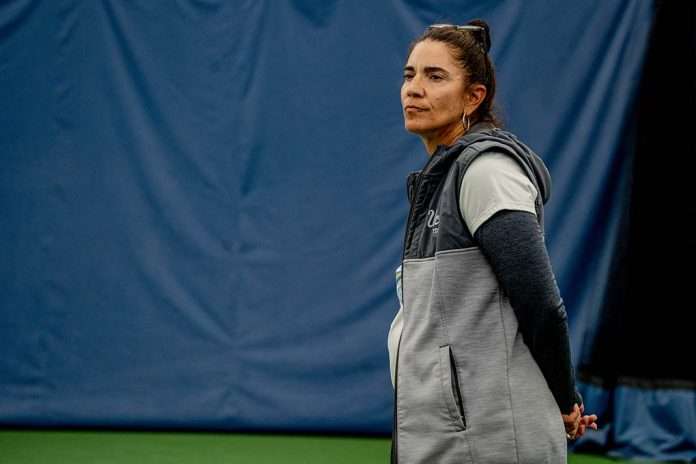 The second-longest tenured active coach at UCLA, Sampras Webster led her team to NCAA titles in 2008, the first in program history, and again in 2014.

Sampras Webster graduated from UCLA in 1991 with a degree in psychology after playing for the Bruins between 1987 and 1991. During that time she won the 1988 NCAA doubles title, finished runner-up in 1991 and was a named an All-American on four occasions.

After a year playing professionally, Sampras Webster returned to UCLA, where she served as long-time head coach Bill Zaima’s assistant while pursuing her teaching credentials.

USTA.com spoke with the 2012 ITA National Coach of the Year about returning to a place where she had so much success as a student-athlete, the importance of women in head coaching positions and crafting her own legacy in a famous tennis family.

USTA.com: When you graduated from UCLA in 1991 and started playing on the professional tour, at what point did you realize you wanted to pursue coaching instead?

Stella Sampras Webster: I was on the tour and my coach and the head coach at UCLA [Bill Zaima] were having lunch with me, and he literally just asked me. He was looking for someone to groom to take over UCLA. This was a year into the tour during the summer, and I felt like I had to make a decision since I thought what a great opportunity it was.

I figured I wasn’t going to be Top 100 in the world in singles, but I could probably do pretty well in doubles. But I felt like the tour wasn’t a great lifestyle that I enjoyed. I spoke with my family about it, and I always wanted to be a teacher. When I decided to go into college coaching, I really didn’t know how long I’d stay. I wanted to see how I would enjoy it. I was taking classes to get my teaching credential while I was an assistant coach. I just knew that I enjoyed being home and the security of getting a paycheck.

I didn’t enjoy traveling and not knowing where I was going to be in the next month. I was the assistant coach and taking classes, and then I realized how much I really enjoyed being on the court and still competing. I enjoyed the competition part, even though I wasn’t playing and having direct influence on the matches. I just felt like the competitive part of me enjoyed helping players reach their goals and win their matches and help them through this college journey.

USTA.com: Looking at your progression when you came back to UCLA, how long were you an assistant coach under Coach Zaima before you became the head coach?

Stella Sampras Webster: When the head coach decided to retire, I was 27 years old and the new head coach of UCLA women’s tennis. I graduated at 21, so I was probably 23 when I started to be his assistant, then it was four years as his assistant. At the time, I didn’t think that 27 was very young to be head coach, but now I look at it as very young.

USTA.com: Did it seem like a natural fit for you, having played for Coach Zaima and learning from him and then taking over when he retired?

Stella Sampras Webster: Definitely. I felt very much at home the entire time I was at UCLA. I was so familiar with everyone, the program, the history, the alumni. It was a very comfortable transition, and I knew what to expect. I learned so much from him and being his assistant, and he was giving me a lot of responsibilities as an assistant.

We had a volunteer coach, Rance Brown, who is now my assistant, so we both just moved into it together, which makes it very comfortable. I didn’t have to find an assistant coach to work with, not knowing if we would work well together. It made for a very good transition. I learned a lot my first few years. Then Bill Zaima became a volunteer after a few years, so I was very fortunate to have some great coaches working with me. It was a great team, and I was very fortunate to have that support from my coaches.

USTA.com: Looking at the coaching career you’ve had, can you pinpoint a couple of highlights?

Stella Sampras Webster: Bill Zaima had done it all. But the one thing he had never done as a coach was win the team indoors. That was something we really wanted to get for him, and we did that with him with us. That was such a big thing for him, so I was so happy we were able to get that team championship. That was very special.

He is no longer with us, but he was such a great man, my mentor. He was someone I looked up to, who really gave me an opportunity and trusted me with a great program. I owe so much to him for where I am today.

But some of the best highlights I would say were whenever I had my family with me.

USTA.com: What are some of the harder parts of the job? Parts of the grind of being a head coach for 24 years that people don’t necessarily realize?

Stella Sampras Webster: The fundraising that we have to do, the administrative work we have to do, the paperwork and expense reports, they are not my favorite parts of the job. The best part of my job is being on the court with the players.

USTA.com: How hard was it for you personally to craft your own legacy and not necessarily be known just as Pete Sampras’ big sister?

Stella Sampras Webster: It’s funny because I always felt UCLA was something I earned. I earned a spot to play at UCLA, and I didn’t get it because I was his sister. Even my position, I felt like it was my own place.

I know in the beginning, when he was No. 1 in the world, I got a lot of recognition just for being his sister and him being this professional tennis player. So in the beginning it was a little bit more than it is now, but I felt like I got a lot of recognition that I didn’t want or need. I won a national championship. I have done things that he wasn’t really part of, so I felt very good about that. It was definitely more difficult when I was on the tour and I’d go to these towns and play these pro events. People wanted to talk to me, but I knew it was only because I was his sister. I hadn’t achieved anything on the tour as of that time.

So that was uncomfortable because I’m with my peers and having all these interviews and they’re asking about him. But the whole UCLA thing felt very separate and felt like my own thing versus him being part of it, and I felt good about that.

USTA.com: Tennis seems to be at the forefront of having women as coaches at both the pro and college level. How important is it in sports and society to see that happening?

Stella Sampras Webster: I’m really happy seeing so many women coaches out there, especially in the Pac-12, where we have a lot of great head coaches that are women. It’s great. It’s really important. I remember when I started out I was clueless, and I just really hope that when they become head coaches they are prepared.

I would hate for a head women’s tennis coach to get into something that they’re overwhelmed with. That’s why I love that they have all these mentorships and things to help young women to be prepared to be a tennis coach and go through the phases of that.

I think women have a lot to offer, especially ones that went through the college system and are coaching in college. They know what they’re going through, and they can relate to the players quite a bit. I know it’s not easy, especially having a family and having a full-time job, but I always tell them it’s manageable. You can do both successfully if you have a supportive family and you have a supportive staff. I encourage a lot of my players to go into this profession because it’s something they know.

Read the rest of the article on USTA.com.