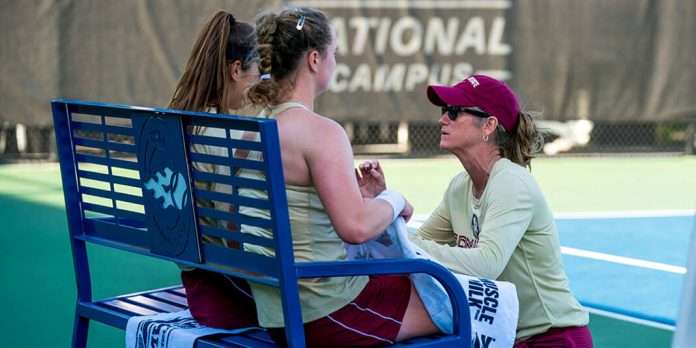 Jennifer Hyde is the winningest women’s tennis coach in Florida State history. In her 16 seasons at the helm of the women’s tennis team, she has led the Seminoles to 12 NCAA appearances, including its first-ever Elite 8 appearance in 2018, and she has earned numerous accolades, including ITA South Region Coach of the Year honors in both 2007 and 2011 and ITA Southeast Region Coach of the Year in 2018.

Hyde, a native of Alpharetta, Ga., first started her tennis career as a player at FSU, where she was a four-year letter winner, NCAA Tournament participant and captain of the 1994 squad that was ranked No. 17 in the country. After graduating in 1995, she began her coaching career at her alma mater, where she served as a graduate assistant coach. She went on to assistant coaching stints with the women’s programs at the University of Iowa (1995-97), the University of Alabama (1997-98) and the University of North Carolina (1998-99), before accepting her first head coaching job at the University of Houston (1999-2004). Things came full-circle in 2004, when she returned to Tallahassee once again, this time as head coach of the women’s tennis team.

USTA.com recently spoke with Hyde and discussed when she first knew she wanted to go into coaching, her experience returning to FSU as head coach, the most memorable moments of her career and much more.

USTA.com: After you graduated from Florida State in the early 1990s, was it always your plan to go straight into coaching? At what point did you know that you wanted to pursue coaching after school?

Jennifer Hyde: I think it was my junior year in college. I had had some ideas about what I thought I wanted to do, and then I think my coaches at the time—Alice Reen was here, the head coach; Jenny Myers, who’s at Alabama now, she was our assistant—we had such a great two-year span there, my junior and senior year, that I just kind of fell in love with the idea continuing to be a part of something like that.

I kind of made my mind up my junior year and never really looked back. It’s hard to imagine, but yeah, I kind of knew it and was just so fortunate that I had a moment where I was like, “Hmm, I think that’s what I want to do,” and so far it’s been a good decision. It’s been a tremendous opportunity in my life.

USTA.com: You had a couple of jobs before getting back to FSU. Once that job came available at your alma mater, what was that process like? How did you land the position, and what were your emotions going through that process?

Jennifer Hyde: I was offered the head position at Syracuse when I was at UNC, and I ended up turning it down because I lived in Iowa for two years, and I realized that there was no chance I could move back up to the north. I’m a southern girl. I’m from Georgia; I can’t do winters.

And then, three or four months later, I got the head coaching job at the University of Houston in Texas. That set me up really well for my first head coaching experience, to make a tremendous amount of mistakes and figure out my identity and the things that are important in coaching. Obviously, that’s ever-evolving, but that was where I really was able to get in and try to figure things out.

I was very young; I think I was either 26 or 27 as a head coach. And then fortunately this job opened up in 2003, 2004, and obviously the idea of coming back home to where you played college tennis… there’s not a bunch of us out there who are able to coach where we played. So I know that’s a pretty unique group to be a part of.

I remember the process like it was yesterday. I didn’t know if I had the chops at the time or the resume at the time to get the job, and fortunately a couple people took a chance on me and gave me the opportunity of a lifetime. I’m just so grateful that I was in the right place at the right time and had some people supporting me to get this position. Sixteen years later, I’m eternally grateful for the opportunity.

USTA.com: You’ve been at this quite a while, so this is probably a tough question, but are there any particular moments or memories that stick out from your career?

Jennifer Hyde: Oh, gosh, yeah! I’ve been so fortunate. One of the things I always try to remind myself of my why and what I do is connecting with and pushing and exploring the student-athletes and just pushing them to the end, and making them better than they ever thought they could be, and growing their games so they can get to the next level.

One of the things I preach a lot is opportunities to have and create moments. I’ve been so fortunate to have so many with so many different groups of kids that have come through the program over the years. Gosh, I remember back in—I don’t even remember the year—the first time we beat Florida for the first time (2011). That was a tremendous change for the program.

Making the Elite 8 two years ago, we’ve had so many moments.

We ended up advancing to the ACC finals and had to play Duke again five days later in the semifinals of the ACC Championships, and advanced to the final, and we had a match point to win an ACC championship. It was last match on, 5-3, 40-30, second-serve return. I’ll never forget it. We didn’t get it, but, boy, we set ourselves up nicely and had the opportunity.

This year, too, is pretty exciting for the girls. Were at the highest we’ve ever been in program history, and I think the girls have created that. To keep creating those moments, it’s not easy. The separation between No. 1 and No. 50 is not great; it’s a couple points on every game day.

We’ve been fortunate that they’ve swung our way nicely this year, and we know that they very quickly swing the other way. We just have to keep our heads down and keep our heels in the ground.

Read the rest of Jennifer’s Q&A on USTA.com