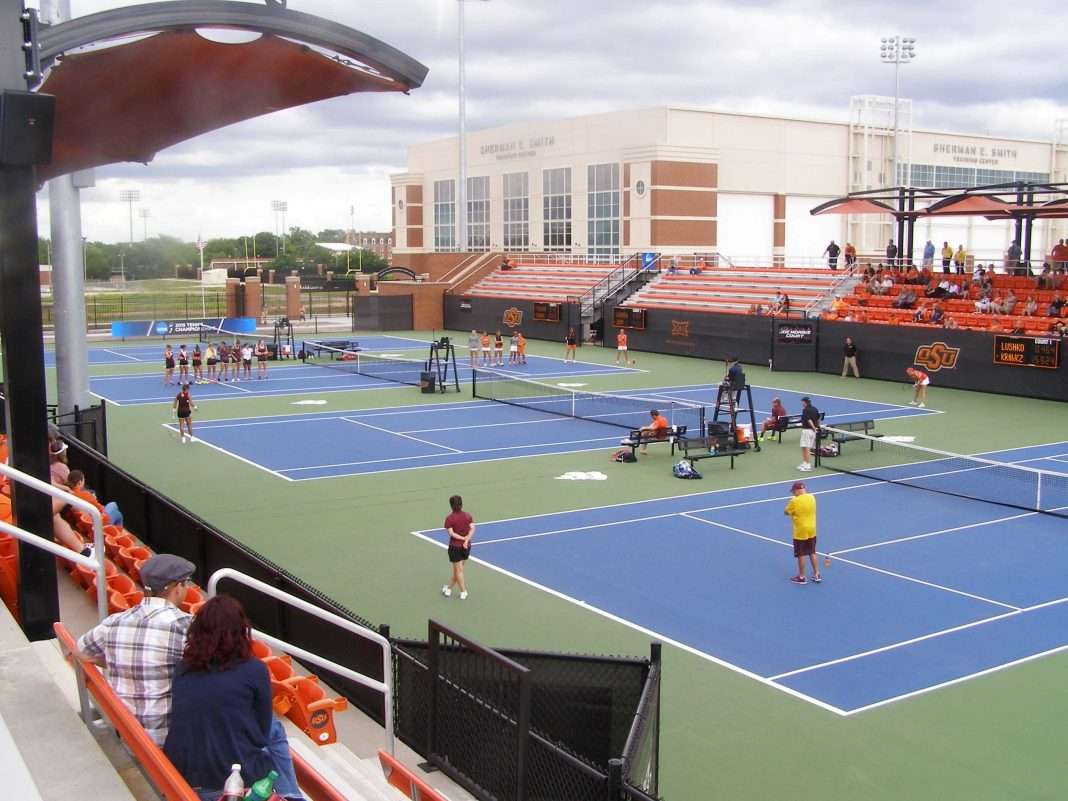 The Greenwood Tennis Center was unveiled in January 2014 with the indoor portion of the complex hosting its first college tennis matches. The facility’s twelve outdoor courts were opened later that year.

Oklahoma State University and the college tennis community always have their eyes set on the largest stage for competition – the NCAA Championship. Cowboys and cowgirls alike were already preparing the road to the championship with many upgrades to Greenwood Tennis Center.

The 50,000 square foot tennis center is located just north of Boone Pickens Stadium. The indoor facility houses six tennis courts, along with coaches’ offices, locker rooms, and a sports medicine hub complete with a hydrotherapy center. The indoor facilities are able to seat at least 350 spectators.

One of the major upgrades to the facility in 2019 would be the lighting and liner system. Sports Interiors, who serves as the official lighting and ceiling liner provider of the Intercollegiate Tennis Association, was able to provide such a service.

The Sports Interiors team was tasked with the responsibility of installing both their indirect LED lighting system as well as a reflective ceiling liner over all six of the facilities indoor courts and completing the installation prior to the start of the ITA All-American Championships that were taking place at the time.

The quick turnaround on this project didn’t stop Sports Interiors and Oklahoma State from focusing on the details. This project included the safe removal and disposal of the existing lighting system, new conduit piping and hanging of the lighting system, and installation of the liner on the ceiling and end walls.

The work was part of a large renovation project that was taking place at the Greenwood facility and the crews were able to coordinate project schedules and timelines with all other teams actively working on the project to ensure everyone was able to hit their target completion dates.

Now, OSU had their eyes on hosting the NCAA Division I Championships in May of 2020. However, there would be a worldly pandemic on the horizon that would eventually cast a shadow upon the renovations.

On March 12, 2020, the NCAA announced the cancellation of the winter and spring championships. The decision was based on the ever-changing public health threat surrounding COVID-19.

Chris Young, Director of Tennis; Head Women’s Tennis Coach at Oklahoma State University immediately felt let down. Hard work and preparation for this event had been taking place for months – even years.

Chris and OSU began fundraising for the tennis center in 2010 with the grand opening in 2014. Since the building originally opened, they have added several additional features in phases including video boards, a building outside for additional public restrooms, and a tennis specific fitness area.

This past fall they felt the need to enhance the indoor lighting to get to the lighting levels necessary to meet the desires of the Tennis Channel and enhance the viewing for the NCAA Championships.

OSU began to work with Sports Interiors in August of 2019.

Lastly, OSU resurfaced all indoor and outdoor courts. All enhancements came with a price tag of just over one million dollars.

“We have received great feedback from everyone on the difference the lighting changes have made,” said Chris Young, “and I am also excited to now have two new visiting team locker rooms that we will be able to have accessible for our next event.”

The cowboys and cowgirls of OSU are now host to one of the most improved college tennis facilities in the nation.

“We are always looking at ways to improve our facilities functionality and I think we have done that,” said Chris Young on the enhancements to the Michael and Anne Greenwood Tennis Center.

Chris knows that there are many uphill battles when it comes to facilities and seeking upgrades and renovations. “I would say dream big, have a vision in mind of what you want and do your best not to cut corners in the process, because you often don’t get a second chance.” Chris said. “Ask questions and seek advice from experts and people who may have made mistakes that you can learn from.”