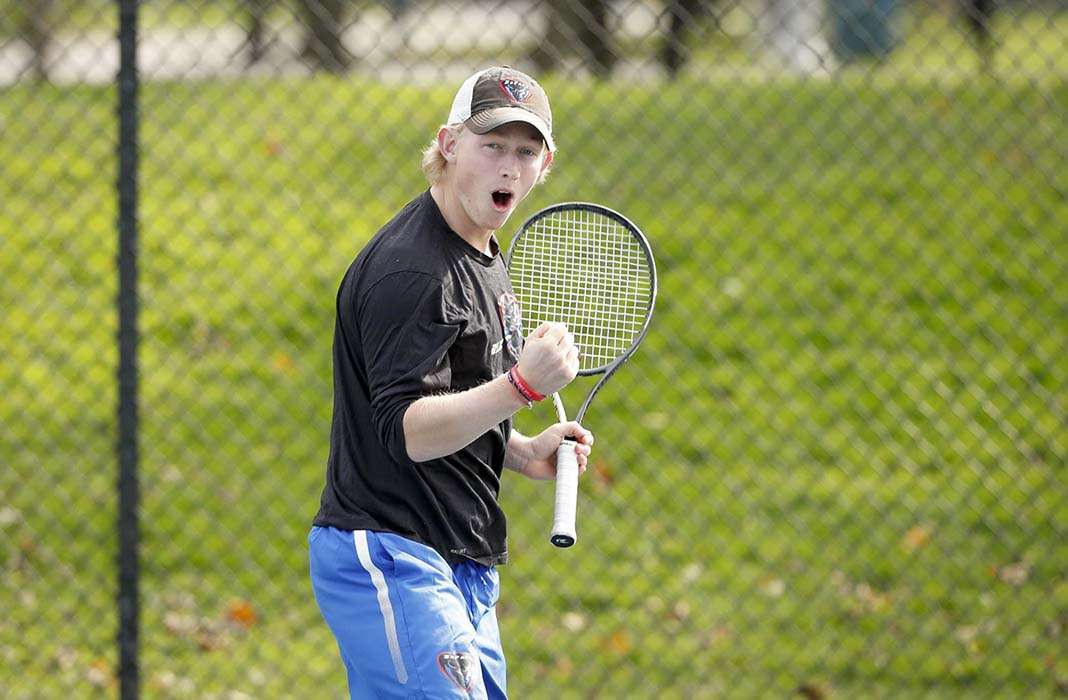 Every so often in life, we are blessed to meet someone who seemingly charts his own course, unafraid of displaying his true nature for all the world to see.

There is a men’s tennis player at DePaul whose destiny is tethered to an unshakeable self-belief that his lot in life is to help the less fortunate.

Having such resolve and purpose at a younger age frees up Tripp Tuff to simply follow his conscience of compassion wherever that may lead.

Noted author Henry David Thoreau wrote: “If a man does not keep pace with his companions, perhaps it is because he hears a different drummer. Let him step to the music which he hears, however measured or far away.”

Last December while many of his contemporaries were preoccupied with the upcoming holiday celebrating a red-nosed reindeer on the “Most Wonderful Day of the Year,” Tuff and Health Sciences major Margaux Rocha led a dedicated group of 34 DePaul students on a medical-based trip to serve a poverty-stricken community in Honduras.

Under the auspices of Global Brigades, the largest student-led service organization in the country, Tuff & Co. spent 10 days effecting a dramatic change in the lives of Honduran people.

On four of the days, they set up mobile clinics in local schools that featured triage stations, doctor consults, gynecology, dental and a children and adult community learning station called charla.

The children’s charla was mostly made up of proper dental hygiene practices while the adult charla was more about reproductive health and nutrition.

“Our medical clinic days started around 6:30 a.m. traveling to the communities so we could be open at 9 a.m.,” Tuff said. “Our volunteers would help set up the stations and staff them. We would work with volunteer nurses and doctors from Honduras. These men and women graciously donated their time in giving back to communities without healthcare.

“Our students would rotate between morning and afternoon shifts staffing the mobile clinics we provided to two different communities.”

The rest of the time in Honduras was devoted to public health where the DePaul students built sanitation stations for five families who had never experienced a bathroom of their own.

Each sanitation station consisted of a pour flush toilet, a sink with running water and a standing shower.

“Since we were not qualified contractors, we assisted in laying cement blocks, the door and roofing,” Tuff said. “Each sanitation station took three days to complete.

“Part of our program fee goes toward supplies and materials for the sanitation stations. When we arrived, the cement blocks, concrete mix and wood were ready. While we worked, the families were close by constantly checking and watching the progress of their new sanitation station.

“Throughout the three days working in their house we got to know the families well and they got to know us. You could see them getting more and more excited day-by-day for the finished product.

“I felt a sense of pride being able to work with the families to provide the sanitation station for them. Prior to our arrival, they had worked so hard to raise part of the fee for the materials, and we got to help them realize their goal.”

Global Brigades provided the housing and meals for Tuff’s group.

“The meals were prepared by local Honduran women from the community,” Tuff said. “Our meals were fairly similar to the food in the USA—however there were more beans and rice as staple foods instead of potatoes. Our living conditions were dorm style in that all the girls lived together and all the guys lived together on the Global Brigades compound called El Censo.

“Our free time was spent at the compound playing soccer, throwing a Frisbee and playing card games. Lots of card games. Most of us did not have cell service which forced us to really connect as a group and consequently made the experience more meaningful.

“Most of our group became close with our translators and our in-country leader. We spent all day every day of the brigade with them, so naturally we all got along.”

Tuff smiled when he thought about supervising his Honduran brigade.

“As a brigade leader, I was not directly involved in staffing medical stations,” he said. “But it was extra special walking around monitoring every station and seeing everyone hard at work and completely invested. It made me happy to see that because we had worked so hard to organize and convince people to volunteer.”

Tuff was just the opposite, jumping at the chance to serve after former men’s tennis teammate Tim Corwin told him about his experience as a brigade leader several years ago. That led to Tuff’s initial brigade to Central America.

“From my first trip to Haiti as a volunteer, I realized that helping those in need was my calling,” Tuff said. “As I sat in the clinic for the first time and watched patients come in and out, leaving a little happier than when they came, it left me with a sense of accomplishment and pride.

“Although I didn’t participate in treating patients, I was happy the nurses I worked with could help provide care.

“After my first experience, I realized that serving international communities was my passion. If we can make someone’s life a little bit easier by bringing healthcare to them, then it was worth it.”

Tennis coach Matt Brothers realizes his team has a unique kind of guy.

“Tripp is the community service backbone of our team and has been a part of Global Brigades for several years now,” said Brothers as his ‘Band of Brothers’ have won three Intercollegiate Tennis Association (ITA) Community Service Awards in the last four years. “He has volunteered for other projects over the years. He is really a great young man and plans on doing a lot of good for this world.”

Tuff thought of an interesting wrinkle to his latest brigade.

“If we do our jobs properly, we are essentially making ourselves obsolete,” he said. “It means the community is self-sustaining and no longer in need of our help.

“I believe everyone should have access to healthcare, and it is our job to make that a reality for those living in extreme poverty.”

Well said, Tripp Tuff, and may you always step to the beat of a different drummer.