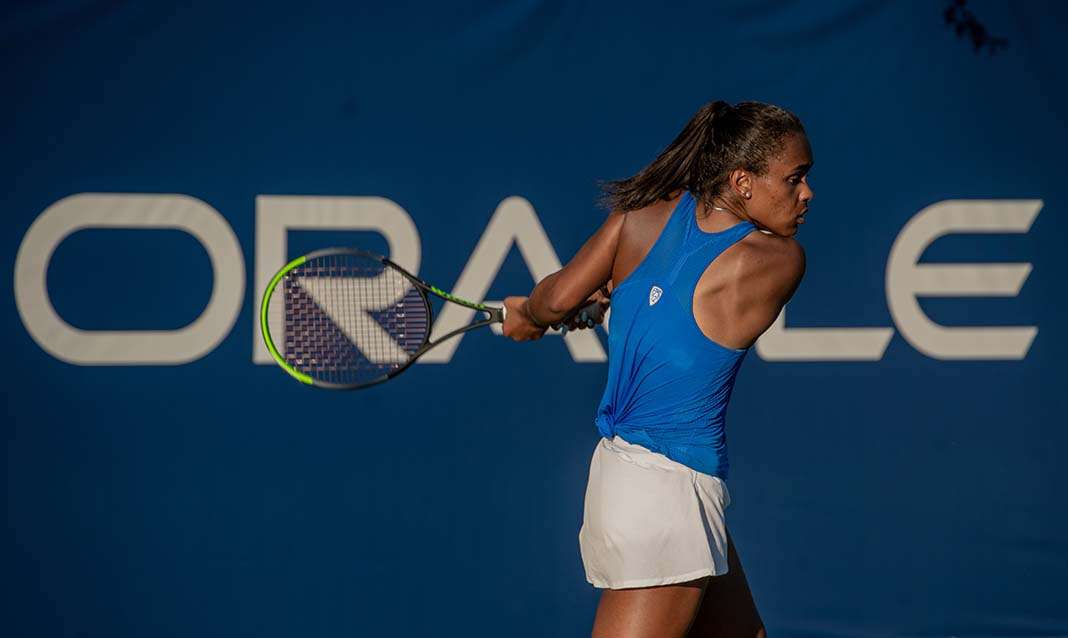 Almost 1,400 players took to the courts this weekend to compete in the Oracle ITA Summer Circuit powered by UTR. Week 6 marked the largest number of tournaments held across the United States during a single week of the Summer Circuit.

A Blue Chip from the Class of 2021, Baylor Sai notched a statement tournament win in Murfreesboro, Tennessee. After easily downing his opponents in the first two rounds, Sai matched up with Tennessee’s Andrew Rogers in the quarterfinals. The rising senior Vol took the first set, but Sai dug in and fought back. After taking the second set in a tiebreaker, Sai won the hard-fought super tiebreaker, 3-6, 7-6 (3), 1-0 (9). In the finals, Sai downed Tomas Rodriguez, University of Tennessee at Chattanooga, in a super tiebreaker.

Five-star recruit Ann Guerry powered through the Summer Circuit tournament at the Adams Tennis Complex. Guerry walked away with the tournament crown after downing University of Memphis freshman Monique Woog. She blanked Woog in the first set and finished the match off strong, 6-0, 6-3.

In Cleveland, Alex Bancila of the University of Illinois matched up against top juniors and collegiate players. In the semifinals, Bancila clashed with Michigan State sophomore Carson Gates. Gates challenged Bancila by taking the first set, but was unable to secure the match, 2-6, 6-1, 1-0. Bancila moved onto face Brett Winters of Xavier University in the finals. He downed Winters in a super tiebreaker.

Class of 2021 junior Adam Duan swept through the Palm Beach Atlantic tournament over the weekend. Duan’s closest match was in the semifinals against Jacob Lowen, 7-5, 6-2. In the finals, Duan posted identical sets – 6-1, 6-1 – to take home the crown.

Class of 2022 powerhouse Madison Sieg takes home the tournament title in Palm Beach. Sieg blanked two of her opponents. Her closest match was in the finals against blue chip Sydni Ratliff, 6-3, 6-4.

Playing at his home tournament, Guido Marson made it the second straight week that a Texas A&M player has won an ITA Summer Circuit tournament. Marson’s faced teammate Austin Abbrat – and winner of last week’s prize money tournament at the Bay Area Racquet Club – in the finals. In the quarterfinals, Marson downed fellow Aggie Kenner Taylor, 6-4, 6-0.

In Texas, blue chip recruit Savannah Broadus took home the women’s title at the ITA Summer Circuit event at Texas A&M. In the round of 16, Broadus defeated SMU Mustang Kiana Graham, 6-0, 6-2. Broadus advanced to the finals without much of a challenge. In the finals, five-star recruit Jeanette Mireles started off strong taking the first set. Broadus eventually won in a super tiebreaker, 2-6, 6-3, 1-0 (4).

Illinois commit Katherine Duong claimed the women’s title at the Blackhawk Country Club tournament in California. The blue chip recruit defeated Zoe Clydesdale-Eberle, University of the Pacific (CA), in the quarterfinals to the tune of 6-1, 6-4. Facing five-star recruit Leyden Games in the finals, Duong forced a super tiebreaker after dropping the first set. She took the match 4-6, 6-3, 1-0 (8).

Mika Ikemori finished the ITA Summer Circuit tournament in Ojai the same way she started it – in a super tiebreaker. After taking the first set in her round of 32 matchup against Thelma Sepulveda, Ikemori faltered and dropped the second forcing a tie break. After moving on from her long opening round match, Ikemori won the next three matches in straight sets. In the finals, once again the match was decided in a tiebreak. Ikemori secured the title with a 1-6, 7-5, 1-0 (7) win.

In the only prize money tournament of the weekend, USC’s Bradley Frye took home the men’s title. Frye faced a slew of collegiate players en route to the title: McKendree’s Jaydn Richardson and Wichita State’s Alexander Richards and Marius Frosa. Frye faced Frosa in the finals where he notched a 6-4, 6-4 victory.

The UCO rising junior took home the women’s title and the prize money at the Wichita State tournament. Abidullina faced UC Santa Barbara commit Camille Kiss in the finals. After dropping the first set to Kiss, Abidullina went on to take the match 3-6, 6-4, 1-0 (7).

En route to the men’s title at the Millbrook Exchange Tennis Center tournament, Goncalo Ferreira defeated three collegiate opponents – including his own Liberty teammate, Rafael Da Silva, in the finals. Aside from the semifinals, Ferreira won all of his matches in straight sets. It took a super tiebreaker in the semis for Ferreira to defeat incoming University of Tennessee at Chattanooga player Peyton Gatti.

Bruins standout Abbey Forbes did not drop a single set en route to her victory at the ITA Summer Circuit tournament at Millbrook Exchange Tennis Center. Forbes faced several top collegiate players during the tournament. In the semifinals, Forbes defeated NC State’s Anna Rogers 6-1, 6-3. Rogers finished the 2020 season ranked No. 32 in the Oracle ITA Singles Rankings. In the finals, Forbes matched up against Vanderbilt’s Anna Ross. Forbes blanked Ross in the first set, but had to hold off a late rally in the second to win 6-0, 7-5.

Minnesota commit Gavin Young ran through the gauntlet of junior and collegiate players at the University of Minnesota tournament this weekend. Young did not drop a set the entire tournament. He secured the title with a 6-1, 6-2 victory over four-star Mujtaba Ali-Khan in the finals.