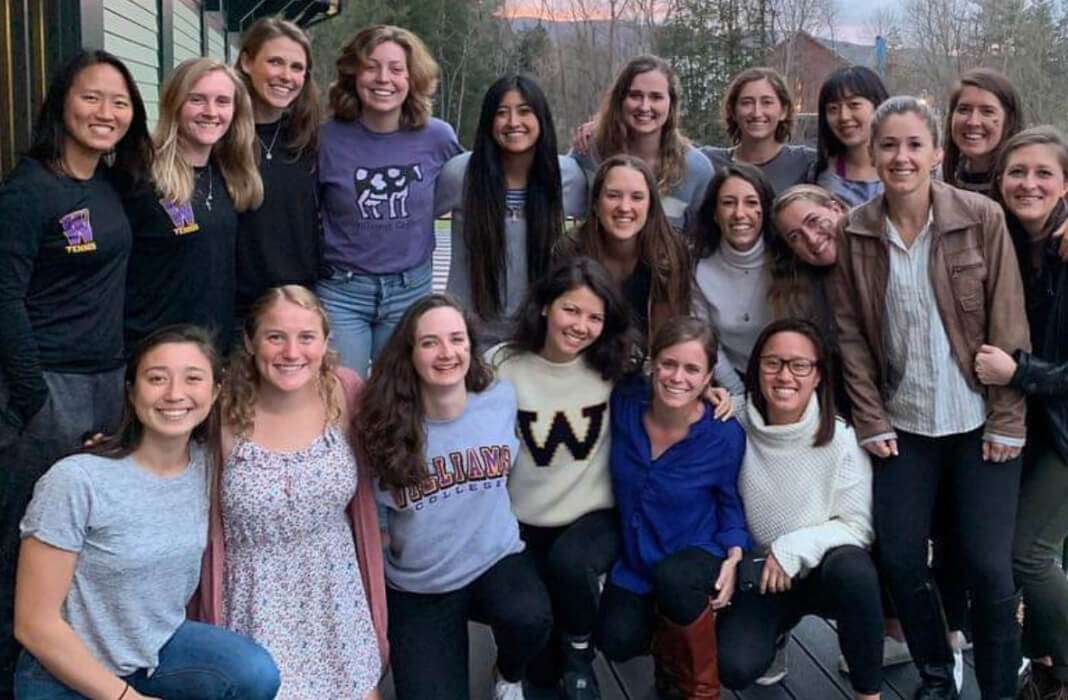 This Q&A is part of a series with college tennis coaches asking them to describe their alumni engagement efforts, so that others can learn about its importance and ways it can be accomplished. Now more than ever, former college tennis players should stay connected to their program and their sport. Alums that haven’t joined the College Tennis Alumni Network should do so at www.collegetennisalumni.com.

ITA: Anik, can you explain briefly why you think keeping your former players connected to the Williams Women’s Tennis program is so important?

Coach Cepeda: The former players are part of what makes joining this team so incredible to begin with. At Williams you’re immediately embraced into this lifelong family – vs just a four year commitment – and it’s what separates this alumnae group from others. The players are in it for the long haul and take a lot of pride in the legacy they impart on the team no matter where they’re at in life (pre-attending, attending, post-graduation).

ITA: What are some of the ways you and your staff keep your former players regularly connected to the program?

Coach Cepeda: We have a mentorship program that matches current players with WWT alumnae, we host a mixed doubles alumni day for the current teams, and currently a group of alumnae are running discussion groups on race, equity, and inclusion.

ITA: Do you typically hold any alumni event(s) throughout the year? And what about during COVID-19 – have you done anything virtually?

Coach Cepeda: Yes, we have our alumni mixed doubles event in the Fall, and every other year host the alumnae on campus for our match against Amherst. This spring we had a zoom gathering for current players and alumnae to connect and share their WWT stories, what they’re up to, etc. It was fun!

ITA: What is your favorite part about these events?

Coach Cepeda: I love to hear stories and get to know what the alumnae are up to. I also enjoy watching current players light up when they see older teammates or mentors!

ITA: If a coach hasn’t spent time connecting with his/her alums, how would you suggest he/she get started?

Coach Cepeda: This is just my third year at Williams and I’m not an alumna of the school – shocking, I know. To get more familiar with the former players, I started by connecting with a handful of them via email and phone. Honestly, digging into the record books and featuring them on social media has helped me the most with names and understanding the various eras, accolades, and legacies of the WWT players. They are so accomplished!

ITA: What would you tell alums on why they should stay connected and also ways they can help our sport?

Coach Cepeda: Being a part of a team is fun. Reach out and ask the coach if there’s anything they want from the alumnae base, support they’d like to see, materials that might be useful for current players. You can help our sport by making it more equitable for all to play it (engage in conversations, donate to programs with scholarship funds, etc.).

ITA: Have any of your alumni engagement efforts resulted in fundraising successes?

Coach Cepeda: We don’t fundraise anymore at Williams, but the “tournament fee” alumni are recommended to pay at our mixed doubles event goes to support the local NJTL in Bennington, VT.

ITA: We know college tennis players go on to do amazing things in the world. Are there any of your alums you want to give a special shout out to on what they have accomplished after tennis?

Coach Cepeda: I wish I knew all the WWT alumnae out there! Nancy Worley (‘13) and Katie Friedman Flack (‘11) are doctors who have been working on the Frontlines throughout this Pandemic. Maya Hart (‘15) is a leader in the anti-racist movement and just graduated with a masters in social work from UNC Chapel Hill. Giulia McDonnell Nieto del Rio graduated recently from Columbia with a masters in journalism and is writing pieces regularly for the New York Times. Sabrina Oei (‘97) is now the Senior Director of North America Communications for Nike. Former Williams Coach, Alison Swain (‘01) is the Head Coach at USC. They’re all so great.