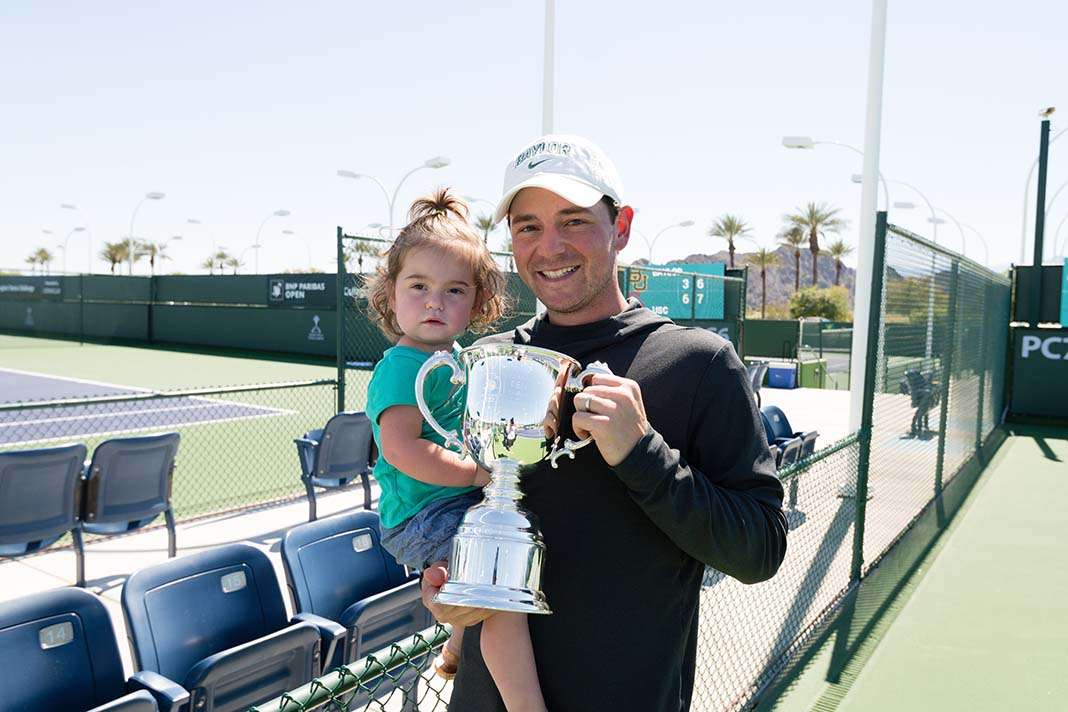 Michael Woodson was deliberating between attending medical school or pursuing a fellowship when the direction of his life tragically changed.

Woodson was a senior at Valparaiso University, juggling tennis with a triple major in biology, chemistry and exercise science. On the morning of Nov. 3, 2011, his mother, Maria Woodson Dann, a longtime elementary school teacher in the Raleigh, North Carolina area, was driving to work when she was hit head on by a drunk driver and killed.

Woodson was in shock once he received the news. He shared an extremely close relationship with his mother. Instantly, all of his future plans took a backseat to his grief. He needed to feel safe and wanted to remain close to people he loved.

Valparaiso head coach Jim Daugherty offered Woodson a job as an assistant coach once he graduated. Woodson could stay on campus and obtain a master’s degree. If he didn’t like coaching, he could move on when he felt ready.

Woodson poured himself into the profession and didn’t want to leave.

He was recently named Baylor’s interim head coach for the 2020-21 season, with hopes of reaching a long-term agreement and removing the interim label by next summer barring an unforeseen event.

After receiving the call from Baylor athletic director Mack Rhoades, Woodson thought of his mother and wished he could have shared the moment with her in person.

“She meant everything to me. I am thankful for the 21 years we did have together and the great memories I have with her,” Woodson said. “I make sure I do everything to live out her legacy so that she would be proud of me.”

Woodson, who turned 31 in February, set a goal of becoming a head coach at a Power 5 program by age 30. But he wasn’t expecting things to unfold this way. He was completely caught off guard when Rhoades told him head coach Brian Boland was resigning.

“Nobody saw this coming,” said Woodson, entering his fifth season at Baylor. “I think that made it a little bit easier to relate to the players because everyone was surprised. Our job was to come together as a family and move forward, and I must say the players have been extremely mature and had great perspective in handling this.”

Coaching and teaching is in Woodson’s bloodline. His mother worked in a classroom for several years before becoming a curriculum development specialist so she could impart her wisdom on other teachers. His father, Tracy, is a former Major League Baseball player and longtime college baseball coach.

Tracy Woodson played at North Carolina State and was selected by the Los Angeles Dodgers in the third round of the 1984 draft. Once his pro career ended, he began coaching in the minor leagues and entered the college ranks at Valpo in 2006.

Michael Woodson grew up playing baseball, but desired to find another sport. He started playing tennis at age 13 because a close friend was trying out for the JV team in high school.

Woodson started college at N.C. State, but transferred to Valpo after two years because he wanted to be competing in tennis again. With his dad as Valpo’s baseball coach, he received a tuition break and became a three-year starter for the Crusaders.

The tragic death of Woodson’s mother shook everyone in the Valpo program.

“I know how close he was to her and we shared that in common since both of us were raised for the most part by our moms,” Daugherty said. “There was just a lot of respect because of the sacrifices they made. I think we related on that level, and I knew how devastating it was to him when she passed. It just crushed me. It really did.”

Daugherty admits to having reservations about offering Woodson an assistant coaching position for fear of holding him back from pursuing other careers.

“I didn’t know if it would be best for him. He was No. 1 in his class academically,” said Daugherty who spent 35 seasons coaching Valpo. “His dad was not happy with me at first, because not only was he supposed to go to med school, but he probably would have become a top surgeon.”

Once he joined Daugherty on his first recruiting trip to scout players, Woodson never doubted he made the right decision.

Read the rest of Michael’s story on Tennis Recruiting Network.