There might have been moments when Pepperdine Waves tennis player Jessica Failla wanted to just call it a match. After all, who wants to compete in the Lone Star State’s searing summer weather for multiple days? Luckily, she didn’t give in.

The 23-year-old Pepperdine graduate student beat the heat (and a handful of elite players) en route to winning the women’s singles division at the Oracle Intercollegiate Tennis Association’s National Summer Championship on Aug. 11 at Texas A&M University in College Station.

Failla said winning the four-day spectacle was a great feeling.

“It was the first college tournament that I have won,” she said in an interview eight days later. “I had gotten to the finals of some college tournaments, but never won. This means a lot to me. It was really hot out there. To win in those conditions shows that my fitness has improved a lot.”

“Two or three days in the tournament, we played two matches a day and the heat index was 110 degrees,” Failla noted. “I think the most challenging part of it was mentally staying in it and fighting hard for every point when your body just wants to give up.”

The Pepperdine player powered her way to the tournament’s disk-shaped, silver trophy and $2,500 in prize money.

The top-seeded Failla defeated the sixth seed, San Diego Toreros junior Solymar Colling, in the championship, 6-2, 6-1. She beat junior player Saniya Singh, 6-3, 6-1, in her opening match. On the second day of the event, Failla downed ITA Cup Champion Berta Bernardi, 6-1, 1-6, 1-0, before beating junior player Jeanette Mireles, 6-1, 6-0, in the round of 16. Failla knocked off Leyden Games, a USC commit, 6-2, 6-1, in the quarterfinals and then beat North Texas alumna Maria Kononova, 6-1, 6-4, to reach the title match.

She was one of two champions of the tennis event, which featured 269 professional, collegiate and junior competitors. Texas A&M’s Hady Habib won the men’s singles title.

Failla also wasn’t the only Wave to win a tennis tournament this month. Former Pepperdine player Luisa Stefani and her doubles partner, Hayley Carter, won the WTA doubles title at the Top Seed Open in Lexington, Ky., on Aug. 19. Stefani, ranked 39th in the doubles rankings, played at Pepperdine from 2015-18. She was an ITA All-American in singles all three of her years in Malibu.

Failla and her Pepperdine team were amid a successful spring season when it was prematurely ended in March by the novel coronavirus pandemic. The 2019 All-West Coast Conference singles and doubles second teamer finished 2020 ranked 35th in singles and 55th in doubles in the ITA rankings. Failla beat Anna Turati, ranked second in singles, in February.

The spread of the coronavirus ground the sporting world to a halt for several months, but Failla stayed as active in her sport as she could. She had access to a gym in her grandparents’ garage and a few private courts. Failla also had training partners in her parents, Greg and Katrina Failla, who both played professional tennis.

In previous summers, Failla would play in a tournament almost weekly, but that hasn’t been possible the last few months. She said the most challenging part of the summer has been maintaining a good perspective.

“Pro tennis got canceled; college tennis got canceled,” Failla said. “Playing in those two things is my passion. It would have been really easy to say, ‘I’m going to take the year off. I’m so upset.’ I chose to have a good perspective, even though there might not be traditional tournaments right now, I would just be really excited and thankful for every match I get to play.”

Read more from the Malibu Times 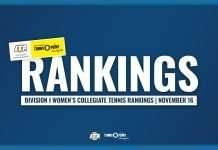