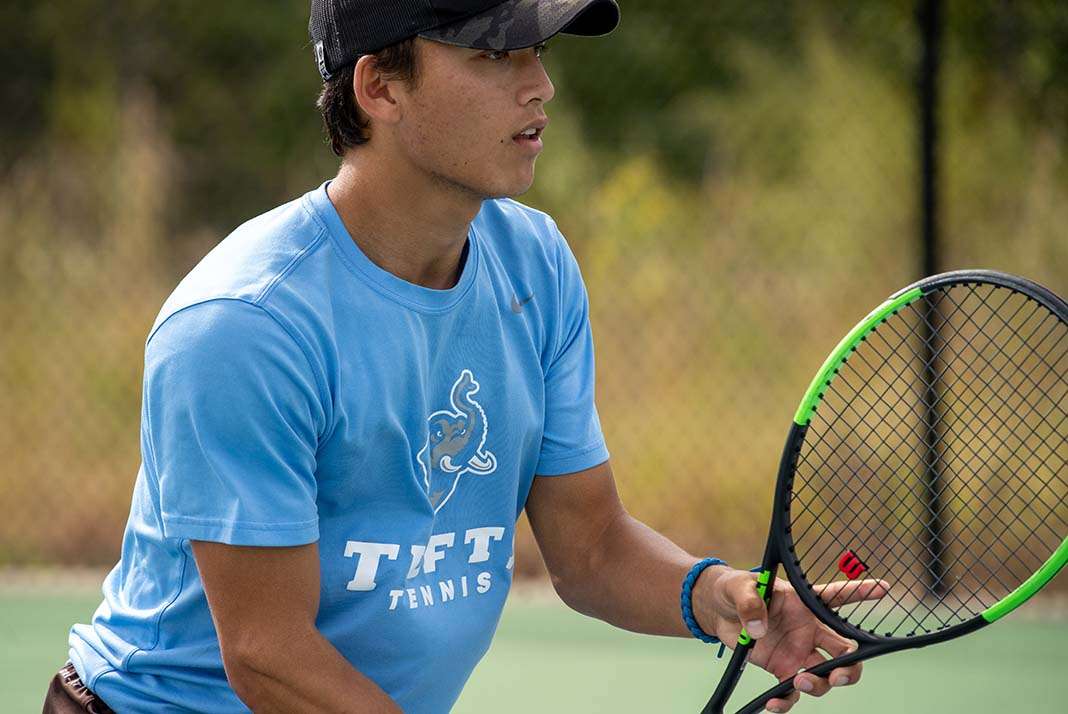 Trinity College, founded in 1828, was the first college established in New England. Since 2000, the team has received eight ITA All-American honors and reached the NCAA tournament four times. Additionally, two players received the NESCAC Sportsmanship Award. In 2020, they placed eight student-athletes on the ITA Scholar-athlete list.

Follow Trinity to see where your UTR stacks up!

Hamilton College first incorporated a men’s tennis team in 1903, making it one of the longest standing programs in college athletics. The Blues hold an impressive program record of nine undefeated seasons since 1903. One of the program’s most successful players, Sam Walker, achieved 27 singles wins in a season and holds the program record in career wins (76). Most recently, the team exemplified its excellence in the classroom by receiving the ITA All-Academic team award for the sixth straight year.

Follow Hamilton to see where your UTR stacks up!

The Williams College Ephs have created a culture of excellence within their tennis program. Since its first varsity season in 1884, the team has won four national championships, 14 NESCAC titles, and appeared in the NCAA tournament in 19 consecutive seasons from 1995-2014. Moreover, the Ephs have been doing a tremendous job building their new facility that is supposed to be fully finished by October.

Follow Williams to see where your UTR stacks up!

Connecticut College has played an important role in NCAA DIII men’s tennis history and has been a team to reckon with. Their best season arguably came in 1997 when the team won the national championship title under former Head Coach Ken Kline. Their best season record though was accomplished two years prior. Connecticut finished with a 12-1 record (92.3% winning percentage).

Follow Connecticut to see where your UTR stacks up!

The Bates College Bobcats have a history of producing successful players and students. The team has 13 ITA All-Americans that received 33 All-American awards in total. Additionally, the Bobcats have produced a NCAA Singles National Champion in Will Boe-Wiegaard. In 2009, the duo of Ben Stein and Amrit Rupasinghe added another national title to the schools list by conquering the NCAA doubles competition.

Follow Bates to see where your UTR stacks up!

The Colby College Mules are always a contender in the NESCAC and have to be considered in national play. Recently, Head Coach Reeb was honored by the USPTA as the New England College Coach of the Year. That award came after Scott Altmeyer’s ITA All-American honor, his highest career ranking, as well as a continuous national team ranking. For the upcoming year, the Mules have received a Top-20 ranking for its incoming class.

Follow Colby to see where your UTR stacks up!

The Mammoths have created a men’s tennis program with multiple titles and accolades in their record books. Amherst College has reached the NCAA DIII team championship match four times, taking the trophy home twice. Additionally, Amherst has won the NESCAC championships six times with three of the titles coming from 2011-2014. Individually, Joey Fritz, became the first Amherst player ever to win the national singles title in 2014.

Follow Amherst to see where your UTR stacks up!

Bowdoin College has been always one to watch for anyone following Division III tennis. The Bowdoin men’s program has four national titles – one team and three singles. Standout Grant Urken has been a part of most of the wins – the singles title in 2018, the doubles title in 2019 with Jierry Jiang, and the team title in 2016.

Follow Bowdoin to see where your UTR stacks up!

Middlebury College is a three-time national champion. The Panthers are also nine-time NESCAC champions, with their latest title coming in 2019. Their winningest coach in program history was Dave Schwarz from 2001-2010. In his nine-year stint, Schwarz accomplished a win percentage of 82.5%. Since 1983, Middlebury College produced 56 ITA All-American Awards.

Follow Middlebury to see where your UTR stacks up!

The Wesleyan University’s men’s team reached the NCAA tournament twice within the last three seasons and advanced both times to the quarterfinals. The teams long-time coach, Don Long, led the team for an impressive 38 years. The university’s winningest coach by percentage was R.P. Swift from 1918-1921, succeeding in 77.5% of the matches played.

Follow Wesleyan to see where your UTR stacks up!

Tufts University has a prestigious men’s tennis team and is always playing for national championships. The program’s current standout, Boris Sorkin, has been a honored on and off the court for his achievements. The Saint Petersburg, Russia native was named Academic All-American, a recipient of the Arthur Ashe Sportsmanship Award, won back-to-back national ITA Cup titles, was ranked No. 2 in singles and No. 7 in doubles in the nation, and helped the team to a national ranking.

Follow Tufts to see where your UTR stacks up!

Interested in learning more about the teams in the NESCAC? Check out our Division III Men Teams page to connect with them on social media and learn more!