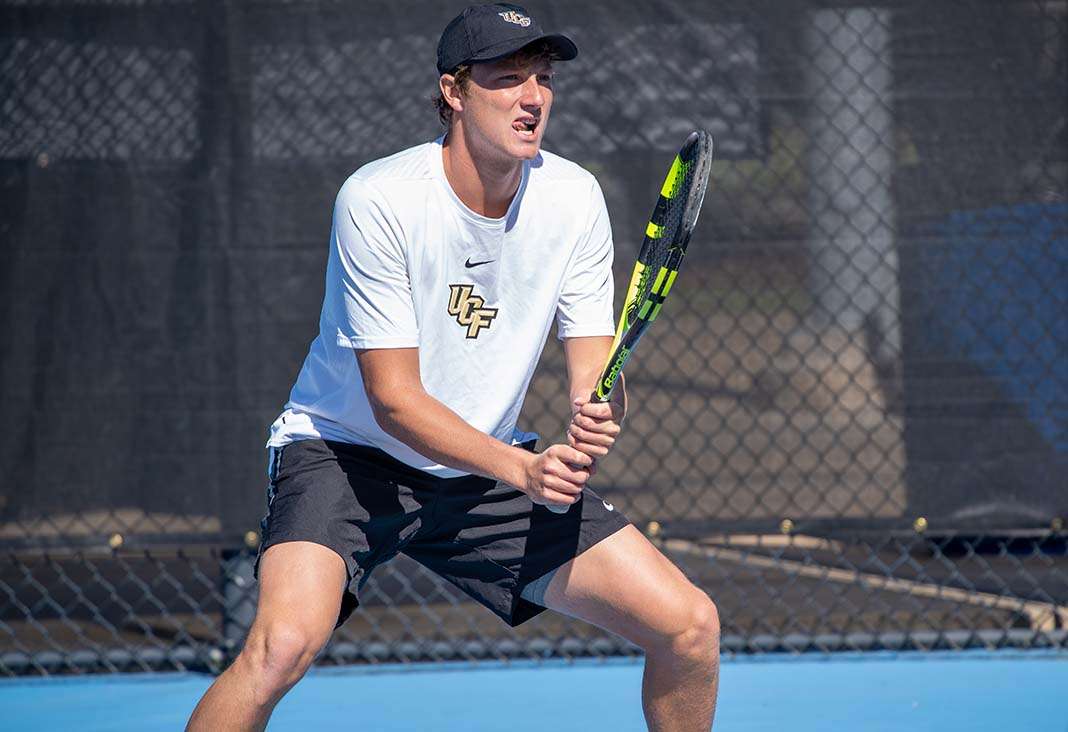 The Temple Owls – located in Philadelphia, PA – have a rich tennis history on their campus. Dating back to the 1936-1937 season, Coach Ed Borden has the highest win percentage as a Temple coach, coming in at 88.9%. Prior to joining the AAC in 2013, Temple won the Atlantic 10 Conference championship in 1985. The team’s most successful player, Filip Rams, recorded 102 combined singles and doubles wins during his four-year stint as an Owl.

Follow Temple to see where your UTR stacks up!

Prior to joining the AAC, the Wichita State Shockers competed in the Missouri Valley Conference. To this day, the Shockers remain the all-time winningest team in MVC history. Since 1977, the team has won 24 MVC conference titles and appeared in 12 NCAA tournaments. Shaun Harrop holds the program record for the most career wins with 111 in singles and 90 in doubles. During the 1982-1983 season, the Shockers reached as high as No. 17 in the team rankings and the duo of Roberto Saad and Paul Smith were ranked No.2 throughout college tennis.

Follow Wichita State to see where your UTR stacks up!

The Tulsa Hurricanes, hosts of the ITA All-American championships in 2019, have played a tremendous role in the AAC tennis landscape on yearly basis. Their highest ever ITA Team Ranking dates back to 2008, when the team came in at the No. 8 spot. Their most outstanding player was Arnau Brugues who won 44 singles matches in a single season, and achieved an ATP career-high ranking of 135 after his tenure in Tulsa. Since 1995, the Hurricanes have reached the NCAA tournament 16 times and won another 16 Conference Championships.

Follow Tulsa to see where your UTR stacks up!

The SMU Mustangs have played an important role within the AAC for years and are well-known for their outstanding accomplishments. In the 1980s, the team reached No. 1 in the ITA Team Rankings three times – 1982, 1983, and 1986. Richey Reneberg, also picked up their only individual top spot in the ITA Singles Rankings in 1987, in which he was also named College Tennis Player of the Year. The Mustangs also have been awarded 49 All-American honors and the NCAA Coach of the year Award for Dennis Ralston.

Follow SMU to see where your UTR stacks up!

The Memphis Tigers have been a force to reckon with especially throughout the past decade. Under Head Coach Goebel, the team had an impressive run reaching the NCAA tournament every year from 2012 to 2018. Prior to joinig the AAC, the school was part of the Conference-USA. The men’s program was recognized with academic awards, having the best team GPA throughout all C-USA programs twice. The program was recently represented in the US Open by Tiger alum, Joe Salisbury. He competed in doubles alongside partner Ram and reached the semifinals.

Follow Memphis to see where your UTR stacks up!

The Tulane Green Wave – centered in New Orleans, LA – made a name for themselves with their long history of success. Prior to their sole national championship in 1959, the team already collected nine NCAA singles and doubles national titles. Additionally, Tulane has produced 18 All-Americans. Their latest, most successful student-athlete was Dominik Koepfer, who was the ITA National Indoor Champion in 2015, and was named the ITA Most Improved Player in 2016. Last week, he achieved his ATP career high ranking of 61. In 2018, the team won their first AAC championship title.

Follow Tulane to see where your UTR stacks up!

South Florida’s Men’s Tennis team was first installed in 1966 and has made huge progress since then. In their 53 seasons, the program sits at 777 wins and 484 losses, won the conference 20 times and appeared in 15 NCAA tournaments. While still working as the assistant coach, current Head Coach Fisher, helped the team to a program high national ranking of No. 13 and reach the second round of the NCAA Tournament.

Follow USF to see where your UTR stacks up!

The UCF Knights claimed the top spot in this week’s ITA UTR Featured Conference for a reason. Previously, the program reached three AAC championship finals and appeared in five NCAA DI tournaments. Prior to the university becoming a Division I powerhouse, UCF competed in NCAA Division II and played in seven NCAA DII team tournaments. Recently, Gabriel Decamps received the ITA All-American Awards in Singles and was also the highest ranked player in Knights’ history, coming in at No. 6 in the ITA Singles Rankings.

Follow UCF to see where your UTR stacks up!

Interested in learning more about the teams in the American Athletic Conference? Check out our Division I Men Teams page to connect with them on social media and learn more!