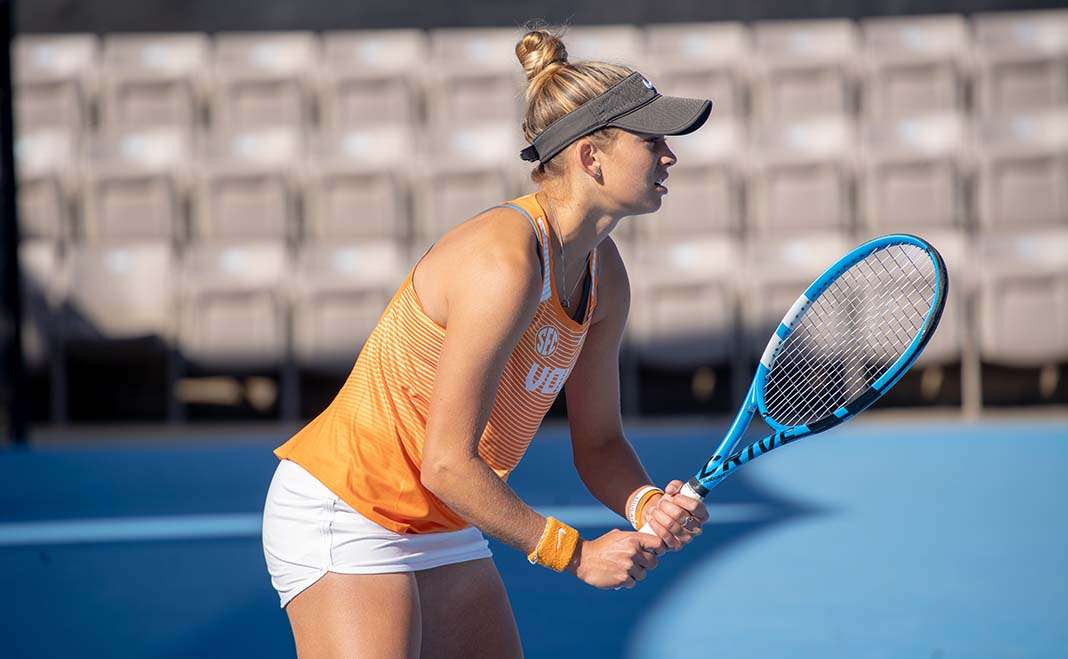 The Mizzou Tigers have a rich tradition in collegiate athletics and their tennis program does not fall short of accomplishments. The team was recently recognized by the NCAA for their outstanding work in the classroom. They were also named an ITA All-Academic Team for the fifth straight year. Additionally, senior Marta Oliviera was recognized by the SEC for donating her time to people in need. She was named to the SEC Community Service Team.

Follow Missouri to see where your UTR stacks up!

The Kentucky Wildcats have a tradition of success in the Southeastern Conference. The Wildcats finished the 2020 season ranked No. 35 in the Oracle ITA Rankings. The team was also recognized for their excellent classwork and was named an ITA All-Academic Team. The Wildcats had their very own member representing the Blue and White in the community. Lesedi Jacobs dedicated her time serving others while being a UK student-athlete. She was added to the SEC Community Service Team. In 2017, Mami Adachi and Aldila Sutjiadi became the first Kentucky pair ever to win the ITA/Oracle National Fall Championships in doubles.

Follow Kentucky to see where your UTR stacks up!

The Alabama Crimson Tide are not only known for their famous football program, but also have a highly successful women’s tennis team on their campus. In 2014 and 2015, the doubles pairing of Erin Routliffe and Maya Jansen became just the third duo to win back-to-to-back NCAA titles. Routliffe set another milestone in 2017 by finishing as runner-up in the NCAA Doubles Championships with her new partner, Maddie Pothoff. During the 2014 season, the team also had their strongest showing at the NCAA Team Tournament and advanced to the Elite Eight for the first time in program history.

Follow Alabama to see where your UTR stacks up!

STARKVILLE, MS – MARCH 01, 2020 – Mississippi State Freshman Marta Falceto during the match between the Vanderbilt Commodores and the Mississippi State Bulldogs at the AJ Pitts Tennis Centre in Starkville, MS. Photo By Gabby Zgunda

The MSU Bulldogs are fierce competitors within the SEC. Their most glorious moment in program history came in 1989 when Claire Pollard and Jackie Holden claimed the program’s first-ever national championship title in doubles and finishing as the top-ranked pair in the nation. Recently, Jasmin Lee became the first-ever ITA Singles All American for the Bulldogs. She followed it up with another singles and doubles All-American Award the year after making herself a Bulldog legend. The team’s highest-ranking ever was achieved in 1989 and 2017, coming in at the No. 20 spot.

Follow MSU to see where your UTR stacks up!

The Arkansas Razorbacks have been one of the toughest SEC foes throughout their program history. The team’s highest-ever ranking was achieved in 2008 climbing to the No. 14 spot in the Oracle ITA Team Rankings. That year the Razorbacks had one of the finest players in college tennis on their team, Aurelija Miseviciute. During the 2008 season, she was the top-ranked player in the country in singles. She also leads the team stats charts in all-time wins, single-season wins, and winning percentage. The program’s winningest seasons were back in 1980 and 1981 winning 28 matches each year.

Follow Arkansas to see where your UTR stacks up!

The UT Vols have an outstanding program history. Throughout their 27 NCAA Tournament appearances, their 2002 campaign stuck out. The Vols reached the Final Four and finished as the No. 10 team in the nation. The Vols have 18 ITA All-Americans in program history, with eight of them earning multiple All-American honors. Off the court, the Vols were honored by being a part of the SEC Community Service Team every year since 2004.

Follow Tennessee to see where your UTR stacks up!

The Auburn Tigers women’s tennis program was established in 1978. Throughout their 42 seasons, the Blue and Orange reached the NCAA tournament 12 times — with their last appearance being in 2018. In 2016, under the helm of Lauren Spence, the team finished as the No. 12 in the nation winning 24 matches during the season. The Tigers have six ITA All-American recipients in program history. Their highest doubles ranking was achieved in 2008 — ranking as high as No. 9 in the country.

Follow Auburn to see where your UTR stacks up!

After leaving the Big 12, the Texas A&M Aggies joined the SEC in the 2012-2013 season. As soon as the Aggies started competing in the SEC, the team took their play to the another level reaching the NCAA Finals for the first time in program history. Additionally, the Aggies made a statement and won the SEC West in their conference debut. For the past 20 years, the Aggies have been competed in the NCAA Championships on a consecutive basis including five Sweet Sixteen appearances.

Follow A&M to see where your UTR stacks up!

The Ole Miss Rebels have consistently been one of the top tennis programs in the nation. In the early 1990s, Paloma Collantes was the first-ever Ole Miss player to collect four ITA All-American honors as well as being the top-ranked player in the country. In 1998, the Rebels won their first SEC title, knocking off the national champion Florida. Arienne Hartono, was the first Ole Miss player to win an individual NCAA championship trophy. Recently, the women collected their highest ever ranking coming in at No. 3 in the ITA Team Rankings.

Follow Ole Miss to see where your UTR stacks up!

The LSU Tigers have seen success last several seasons under the helm of Julie and Michael Sell. The Baton Rouge team reached their highest ranking in 2016, at No. 9, breaking their own record three times during the season. Joana Valle Costa and Jessica Golovin were the first pair of teammates to enter the NCAA singles postseason in the same year. In 2018, Golovin made a deeper run with freshmen partner Eden Richardson. The par won the NCAA doubles championships for the first time in program history.

Follow LSU to see where your UTR stacks up!

The Florida Gators are one of the most storied and tradition-rich programs in the nation. The Blue and Orange have won seven national championship titles, the latest coming in 2017 under Head Coach Roland Thornqvist. The first three national championships were won under the helm of Andy Brandi (current men’s co-head coach at LSU). In 1992 and 1996, the Gators were able to pull off the unthinkable of going undefeated both seasons. Individually, the Gators have had exceptional players as well. Lisa Raymond, former world No. 1 in doubles, and Jill Craybas, former WTA Rank: 39, were just a few names of their seven individual national champions.

Follow Florida to see where your UTR stacks up!

The Vandy Commodores have had some incredible players and coaches come through their program over the years. Their 2015 NCAA championship title under legendary coach Geoff McDonald is the highlight of the school’s program. Coach McDonald, who has been leading the ‘Dores for 25 years, has produced some of the finest college tennis players — including Fernanda Contreras (WTA 446) and Astra Sharma (WTA 117). Both players were part of their NCAA title run and Sharma was voted as the tournament MVP. Contreras holds the program record for most wins, collecting 136 singles wins. The team also received 24 ITA All-American accolades.

Follow Vanderbilt to see where your UTR stacks up!

The South Carolina Gamecocks have had a stellar program showing since their inaugural year in 1973. Just recently, the team achieved their highest ITA Team ranking ever, finishing the 2019 season as the No. 5 team in the nation. Twenty-three other times, the ladies were ranked inside the Top 25 Year-End national rankings. Throughout their historical 2019, the Gamecocks won their sixth Conference title and reached the NCAA Quarterfinals for the second time since 2009. Prior to the shortened COVID-19 season, South Carolina appeared in 25 straight NCAA tournaments.

Follow South Carolina to see where your UTR stacks up!

The Georgia Bulldogs come in at the top spot for this week’s Featured Conference, the SEC. Over the years, the team based in Athens has won two NCAA titles and four National Indoor crowns. The team also made the NCAA Finals two other times and was part of the final four an additional eight times. Their overall record through their 33 straight NCAA appearances is 84-31. Individually, three lady Bulldogs have won the NCAA Singles titles and five doubles pairs reached the national title game. Their latest deep run in the NCAA individual tournament was made by Katerina Jokic who finished as runner-up in the singles draw.

Follow Georgia to see where your UTR stacks up!

Interested in learning more about the teams in the SEC? Check out our Division I Women Teams page to connect with them on social media and learn more!