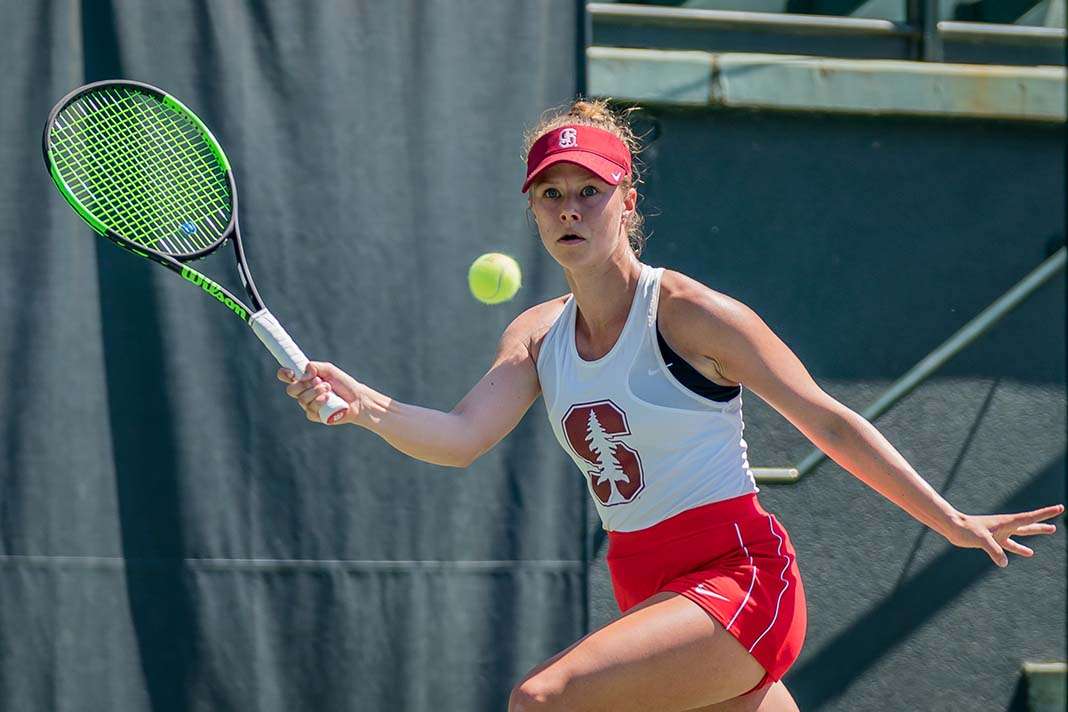 We are seven weeks into the ITA Tour: Fall Circuit by UTR and each week new student-athletes rise to the top of the competition.

This week the top five men and top five women by UTR featured Stanford women’s standout Michaela Gordon and three Northwestern Wildcats in addition to the top recruits in the country.

Read on to see how they fared!

Stanford senior Michaela Gordon came into this weekend’s round of Fall Circuit events as the top rated UTR player. The Cardinal’s No. 1 began play at the competitive Eagle Fustar Tennis Academy Fall Circuit event against the University of San Diego’s Maria Martinez Vaquero. Martinez Vaquero almost pulled off the upset in the opening round after taking the first set, but Gordon grinded out a win in tiebreakers in the second and third. Gordon would compete in two more matches this weekend – one against junior Mirabelle Brettkelly and the other against eventual tournament champion Connie Ma. Gordon was knocked out of the tournament by the junior player in straight sets, 6-3, 6-3.

The Class of 2022’s No. 3 recruit downed over a quarter of Stanford’s women’s tennis team this weekend at the Eagle Fustar Tennis Academy Fall Circuit tournament. Ovrootsky opened play against Cardinal junior Niluka Madurawe. Madurawe struggled in the opening set, but was able to extend the match to a third-set tiebreak. Ultimately, the senior player could not overcome Ovrootsky. She then went on to defeat senior Janice Shin in straight sets to set up a semifinal matchup with Stanford junior Sara Choy. Choy started out hot against Ovrootsky taking the first set 6-0, but Ovrootsky fought back into the match and punched her ticket to the finals. In the finals, she fell to blue-chip recruit Connie Ma in straight sets.

The No. 1 recruit in the Class of 2021 came to the Eagle Fustar Tennis Academy Fall Circuit tournament and blazed through the competition. Ma did not drop a set throughout the entire weekend and only allowed opponents 21 combined games. Ma downed two collegiate players during the tournament – Stanford’s Gordon and University of San Francisco’s Rita Colyer. Ma met blue-chip recruit Vivian Ovrootsky in the finals of the Fall Circuit event. Ma avenged her loss to Ovrootsky at the Blackhawk Country Club Summer Circuit event earlier this year. The junior clinched her first ITA Tour: Fall Circuit by UTR title with a 6-3, 6-4 victory over her fellow Californian.

At the Smith Stearns Fall Circuit tournament, former blue-chip recruit Allie Gretkowski secured a third place finish. Gretkowski faced a slew of top-ranked juniors throughout the tournament. After receiving a first round bye, Gretkowski flew through her first two matches. Through the quarterfinals she only dropped three games. However, in the semifinals Gretkowski met her match in Rylie Hanford. In an up-and-down match, Hanford took the first set 6-1, but then lost all momentum and dropped the second 0-6. Ultimately, the five-star recruit defeated Gretkowski in the third set tiebreak. Gretkowski went on to battle five-star recruit Mckenna Schaefbauer in a third-place playoff match. Gretkowski downed Schaefbauer in straight sets.

After falling just short of the title at the Week Five Smith Stearns Fall Circuit event, tennis pro Kylie McKenzie secured her first Fall Circuit title this weekend. McKenzie won her first two matches in straight sets before being challenged by junior Mckenna Schaefbauer in the semifinals. McKenzie won an extremely close third-set tiebreaker to move on to the finals, 6-4, 6-7 (4), 1-0 (9). In the finals, McKenzie was once again pushed to a third-set tiebreak — this time by junior Rylie Hanford. McKenzie secured the title on Sunday with a 6-1, 2-6, 1-0 (7) victory.

Tennis professional Isaiah Strode swept through the competition to win the Lomas Santa Fe Country Club Fall Circuit event this weekend. Strode won his first three matches in straight sets — defeating blue-chip recruit Rudy Quan, UC Santa Barbara’s Joseph Rotheram, and Harvard’s Alan Yim. After dropping only 14 games through his first three matches, Strode faced a challenge in Cal Poly’s Alexander Stater. Strode easily took the opening set 6-1, but Stater answered with a 6-1 set of his own in the second. Strode dug in and pulled ahead in the third-set tiebreak to win his first ITA Tour: Fall Circuit by UTR event.

Northwestern’s No. 2 Dominik Stary had a hot start at the XS Tennis Fall Circuit event this weekend, but was unable to keep the momentum going to claim the title. Stary blanked Lucas Willett and then posted identical 6-1, 6-2 scores against five star recruits James Albarracin and Mujtaba Ali-Khan. Stary’s stellar run came to an end in the quarterfinals where he sparred with Illinois redshirt sophomore Alex Bancilla. Bancilla won two tiebreaks to knock Stary out of the competition. This weekend’s Fall Circuit event marks Stary’s first return to competition since the end of the dual match season in March.

Northwestern’s Chris Ephron is back for a fifth year after the pandemic canceled the majority of his senior season. This weekend’s Fall Circuit event at XS Tennis is the first competition Ephron has participated in since the shutdown of play. Ephron started off strong in his opening two matches – only dropping two games total. Ephron was tested in the Round of 16 by blue-chip recruit Nikita Fillin, but ultimately moved on after a three-set match. In the quarterfinals, Ephron met up with new teammate Saiprakash Goli. He defeated the first-year Wildcat in straight sets.

Northwestern junior Trice Pickens joined his fellow Wildcats and had a strong start to his weekend at the XS Tennis Fall Circuit event. Throughout the first three rounds, Pickens cruised through his matches. He won all in straight sets and only dropped 11 games including a Round of 16 matchup with Illinois’ Nic Meister. In the quarterfinals, Pickens met teammate Gleb Blekher. For the first time this weekend, Pickens was pushed to a third-set tiebreak, but the junior edged out a win.

UNC Charlotte freshman Vanja Dobrrnjac received an opening round bye at the Prosperity Athletic Club Fall Circuit event this weekend. In his first match he met three-star recruit Noah Van Dyke. Dobrnjac handled the junior easily winning in straight sets. That was the last win for Dobrnjac though. In the quarterfinals, he matched up with Edoardo Bottino of Queens University of Charlotte. Dobrnjac lost the first set and was able to push the match to a third-set tiebreak, but couldn’t quite overcome Bottino.

Check out the rest of the action from Week 7 of the ITA Tour: Fall Circuit by UTR!